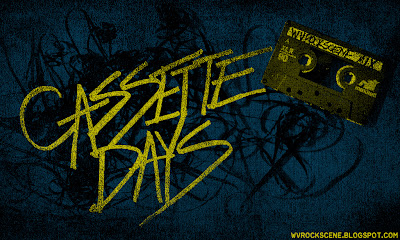 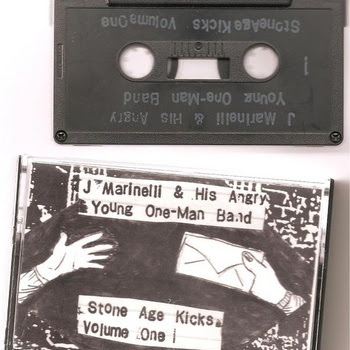 Cassette Days just wouldn't be Cassette Days without J Marinelli's two volume cassette cover series Stone Age Kicks being on here. The Morgantown native, in throwing pretty much his entire discography up on his bandcamp page, has made the entire 16-song effort available to download for free. Depending on how old you are, a cassette tape may be to you what 8-track tapes are to others; stone age technology.

But if you want to hear Marinelli do Beat Happening, Neil Young, The Rolling Stones, The Emergency, Woody Guthrie, Billy Bragg, Daniel Johnston and, our favorites, The Pixies (yes, Jesus and Mary Chain wrote "Head On") among others, definitely check out Stone Age Kicks. This release marks what seems to be a turning point for Marinelli's angry one-man band, as he picks up a banjo and dials back the anger and distortion just a bit. A great release.

Oh, why not check out the WVRockscene review of Stone Age Kicks from way back in 2008? Don't let that ruin it for you though.

As part of our “Cassette Days” series, Todd Burge talked with us about his time in the Morgantown-area band 63 Eyes. Pictured below are some tapes Burge has managed to hold on to, with brief descriptions from Todd.

Hear our mp3 interview with Burge at bottom...

This was a cassette only release post-Larries, pre-63 Eyes. Landed me a recording contract that took me places...places like, nowhere and then back...ha

My second solo release, on cassette only. This was a recording of tunes written around the time of the first Gulf war, thus, the play on Bush’s “New World Order”

Perry Kirk, drummer for 63 Eyes at the time, did the cool cover photo. It isn’t a double exposure and of course, not photoshop; he stapled stuff on plexi-glass

Owen Davis is my musical hero.

A cassette only release, recorded at the recording workshop in Chillicothe on the same board used on John Lennon’s “Double Fantasy.” That didn’t make the recording any better, but it is a cool thought to me. Might release this one next year.

See also: Greetings (From the Inner Self) -- Justin Johnson kicks off “Cassette Days”

I was recently approached by the proprietor of this blog site asking if I’d be interested in contributing to a new series here on WVRockscene.

As communicated to me, the focus of this series would be the music scenes based in and around Huntington, Charleston, Morgantown (and surrounding areas) of the 1990’s, before the Internet Age made it possible for every musician to more easily promote themselves and sell their original music to a seemingly endless audience.

I was intrigued by the idea and immediately signed on, which is why you are currently reading this.

Quite honestly, and although some of you may already know this, I’ve entertained a similar idea as the basis for the book that I’ve yet to write.

That book, which is still a goal of mine, would concentrate specifically on Huntington’s music scene, 1989-1998, 10 years bookended by the opening and closing of the city’s two most infamous live music venues, Gumby’s and Drop Shop.

Anyone that spent any significant amount of time at either joint can attest to the numerous memorable moments that took place at 1318 4th Ave., where both places called home.

Whether it was G.G. Allin, The Afghan Whigs and Kyuss at Gumby’s, or Godflesh, Type O Negative and Corrosion of Conformity at Drop Shop, these were shows that people still talk about to this day.

But perhaps what people most remember, at least from the perspective of those whom frequented Gumby’s, is John Kerwood, the man most responsible for helping plant the seed for what would eventually become a vibrant, local music scene.

Kerwood was, in the eyes of many, Gumby’s.

Although I was only 17-years-old at the time, I was first introduced to him in 1994, when I was asked if I’d be willing to help promote a Cannibal Corpse show that he and Gumby’s booker, Brian Barlow, were putting on.

It would be another couple of years, however, before we would cross paths again, as Gumby’s would soon close and Drop Shop would take over residency at its former home in the fall of 1995.

We ran into one another in 1997, at Davidson’s Music and again, most memorably, in 2002, when two friends and I made the trek to Charleston to pay a visit to the newly renovated Sound Factory, for which he was, quite proudly, responsible.

None of us knew it at the time, but it would be the last time we’d see him alive, as he passed away a year-and-a-half later.

In the years that have gone by since John Kerwood died, many new music venues have propped up in and around Huntington, and the Sound Factory is still thriving in Charleston.

What I often wonder when I find myself in one of these establishments, though, is whether or not those whom are present realize how it all came to be.

Unfortunately, and I’m a pessimist by nature, the only answer I can usually find is “no.”

Call it an unfortunate characteristic of society, but a great many of us don’t have a sense of history or, most disturbingly, don’t even care to.

It’s an epiphany such as this that motivated me to sign on as a guest blogger when I was offered the opportunity.

Too often we take for granted what we’ve been given, a naïve perception that says “It’ll still be there in the morning when I wake.”

Well, you have to hang on tightly to the things that are important to you because there are no guarantees in life, and even though the sun may rise tomorrow, the place you once called home may not.

An adverse symptom of the “here today, gone tomorrow” disease is the notion that once something is out of sight it is out of mind.

In my opinion, those words best sum up Huntington’s formative years as a burgeoning music town and, sadly, people like John Kerwood who helped build it.

It’s this premise that has prompted me to only write this, my inaugural contribution to this site, but a lot more in the coming months.

You may call it informative reading, but I’d like to call it a history lesson.