Jason Sells on his "Reclamation Tour" 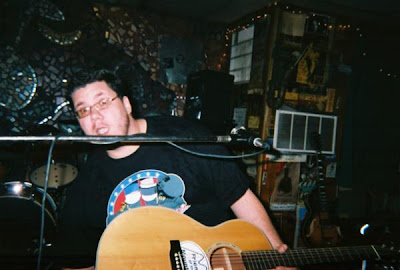 Jason Sells (aka Slate Dump) speaks about his Reclamation Tour and greatest hits CD Fables of the Reclamation.

From birth until age 12 I grew up spending a great majority of my time with my super-extended Scots-Irish family “The McQuillens” in Raleigh Holler (outside of Beckley) in Raleigh County, West Virginia.

My cousins and I loved to play on the “slate dumps” -- whether sleigh riding in winter, riding bicycles up over the large humps, playing king of the hill (which was a childhood game long before the cartoon), or just rolling around on them getting dirty, so as to get your ass busted later by the folks for fucking up your good Sunday clothes.

After moving to California at age 12, getting threatened by local gangs, spit on for wearing WVU clothing, and learning that I was an outsider to a faster, uglier culture, I knew I truly missed Southern West Virginia, and when I moved back to East Beckley ‘the poor side of town’ at age 16, most all of the slate dumps had been “reclamated” or “reclaimed by the department of mine lands.”

Then the “preppie kids” in Beckley would spit on me and call me a “grit,” rednecks would call me a “N___ lover” (fill in the blanks). I felt more out of place than when I lived in California with a Southern West Virginia accent among gang territory.

I dabbled in drugs and alcohol to ease the pain of not ever fitting in. I watched a lot of friends die, went through self-defacing phases. Music was my only saving grace.

I have to thank my great-grandfather Hughie McQuillen (who played every stringed instrument known to man), who worked in the mines during the day, and played dives at night to support his eleven children through the depression, for being one of my greatest influences.

Also my grandmother Doris McQuillen-Bennett for playing guitar to me throughout my childhood; I owe my basic chords to her. She also had one hell of a great record collection: Marty Robbins, Bobby Bare, Chuck Berry, and Bill Withers to name a few, and my mom and step-dad introduced me to AC/DC, The Kinks, The Ramones, the Butthole Surfers; everything from John Lee Hooker and Muddy Waters, to what you hear on classic rock radio today.

Since 1989 I’ve collected blues, jazz, and classic country albums. By the time I graduated college I had two rooms full of vinyl, but with no place to spin them, nowhere that anyone would appreciate them, I had to sell them to make ends meet.

Now I’m homeless, can’t afford treatments from my physicians (aka NO insurance) so I’m forced to pull myself up from my bootstraps and RECLAIM MYSELF, hence the tour name.

Thanks for letting me share,
~ Jason “the Nephew” Sells

P.S. -- this tour would NOT have happened without the care and kindness of one James Marinelli. 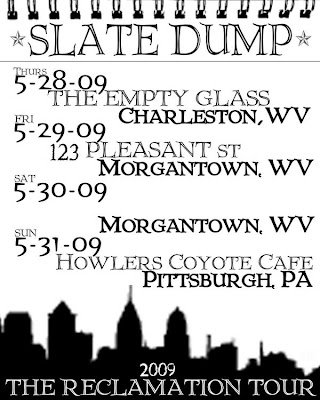 Jason Sells (aka Slate Dump) will kick off what he's calling his "Reclamation Tour" this week at the Glass with J Marinelli, The Limbs and Electric Zoo. It's all apparently one big tour apparently, as Marinelli also begins a steady string of dates, including a stop at the V Club in Huntington.

Sounds good to us; check 'em out online for more info.
Posted by WVRockscene! No comments:

Our good friend Tucker Riggleman of The Demon Beat is set to release a split single with N.Y.-based Dandelion Snow this weekend.

Riggleman's new tunes, recorded by Demon Beat bandmate (and current mutton chop record holder) Adam Meisterhans, with guest appearances by he and John Miller of The Fox Hunt, are "Stand Up," "Biting Bullets" and "Someone To Hold" and from what we've heard Riggleman is rightly stoked about 'em.

The CD is being released by Brooklyn's Lion's Tooth Records and Big Bullet, which apparently has more cool stuff lined up very soon, something called Terminal Ballistics.

We'd promised ourselves a long time ago that we'd never promote Pa. shows -- especially any in Pittsburgh -- but the flyer below clearly indicates that there's a Shepherdstown release show Sunday, and Riggleman's one of the good ones. 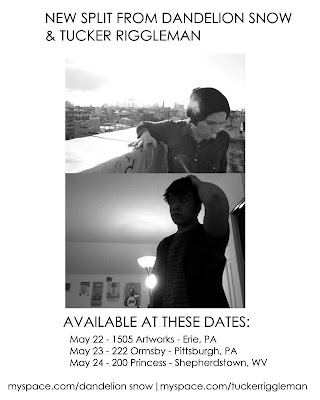 And, irregardless of our eternal disdain for any Nittany Lions or Pittsburgh affiliated Panthers, you should check out Riggleman's solo efforts and why not give Dandelion Snow a listen?

Huntington's Heart Hold True just announced they will release a limited edition EP called This Is War Tuesday at their Brickhouse show and will be releasing a split effort with Erie, Pennsylvania's Smoke & Mirrors in the near future.

You can hear the tunes, read the lyrics, and, if you can't make it to the show, you can buy the EP at their webstore starting Tuesday. Read more about all the stuff that Heart Holds True has going on on their most recent MySpace blog, and check out our chat with frontman Dana White here.
Posted by WVRockscene! No comments:

Obviously, WVRockscene is powered by the internets; a vast network of tubes, basically a phonebook with pictures and sounds. Well, if the powers that be take that away there's no WVRockscene.

Such was the case for the past week or so but now, we're back! We thought they'd finally pulled the plug on the whole thing.

Stay tuned for new news and kudos to this new invention called the internet!
Posted by WVRockscene! No comments:


Not everyone can have as rockin’ a birthday party as Aaron Hawley has lined up this weekend. Friday at Gene’s in Morgantown, he’ll be joined by a few of his ‘85 Flood bandmates and Magic Town luminaries Billy Matheny, Andy Tuck (The Greens), and Kevin Post (The Emergency/Thick As Thieves) to help him celebrate turning the big three-oh.

“It’s really just a party,” the 29-year old said over email. “I’m playing six tunes with Adam and Dusty from the Flood, Matheny, Tuck and Post.”

Someone who's helped put together so many big Magic Town shows and been so important to the scene up there sees the the evening as a own reward in its own right.

“That right there is pretty much my present to myself, then I’m just hanging out watching and drinking all night.”

In addition to the birthday show, Hawley said he was stoked about next weekend's show at 123 Pleasant Street with The Sneakies, whom Hawley described as “Morgantown’s next great band.”

“They’re really fantastic, and fronted by Haley Slagle of the Frustrations. Also at that show One Foot in the Gravy makes their triumphant return with Jeff Goodwin of Law Biting Citizens drumming.”

Hawley’s not only looking forward to the shows. He said ‘85 Flood will be heading into Zone 8 Studios next month to work on the follow-up to Toolshed Shangri-La with Mark Poole, who seems to work with just about every cool rock band up that way, with a September release planned.

“We’re really excited,” Hawley said. “We think the batch of tunes we have this time around are more polished and soulful. That, and it’s always a blast hanging out with Mark.”