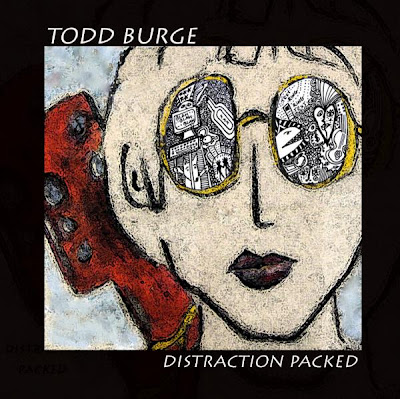 Todd Burge, one of the premiere songwriters in the state, returns with hilarious, quirky, sometimes sad (but always with intelligent wordplay) folk-flavored and alt-country type songs on his latest release, Distraction Packed, with the Odd URges (Rodney Crihfield, Billy Matheny and Joseph Hale).

Although he’s been around for a while, we were first introduced to the Parkersburg-based folk rocker’s music, getting his CD Hip About Time a few years ago, which we of course dug.

With influences ranging from Dylan and Loudon Wainwright III to Leonard Cohen and The Pixies, and having made a name for himself over the years in various bands (63 Eyes, the Larries) and more recently getting gigs on and praise from Mountain Stage head Larry Groce, (who dubbed him “the dean of West Virginia songwriters”) and canvassing the area looking for talent on his Songwriter Nights, Burge, on Distraction Packed (his latest release since 2008’s My Lost and Found), finds himself settling comfortably into his middle-aged, shark skin suit, being as old as he can be, with rockin’ results.

“This Song Won’t Write Itself” is the kind of straight up acoustic folk you’d recognize from Burge. With the help of a sunny day, he gets started on the writing and kicks the CD off.

“Live It Up” has great lyrics about Facebook and the dumbing down that accompanies the disconnected, IM lifestyle. “I'm trying to hang onto my hip, don’t wanna drop its last drip,” ... “Welcome to the middle ages, seasons full of serious faces, not too young not too old,” and “tired of being an old hippie-crite.”

“I’m a Shark” starts the kind of Wilco-sounding alt-country sound, as the sound seems to veer from Burge's solo acoustic folk sound into the fuller arrangements with drums, piano and the always recognizable Matheny providing backing vocals and harmonies. How many bands is he in nowadays? Like half a dozen or so.

Burge sings from the perspective of this depressed, studly shark at the Mandalay Bay Hotel, talking trash to the hotel guests.

“As Old As I Can Be” is the more folksy Burge sound. Despite the aging, Burge is kind of upbeat about it. Pretty song.

Where he was once a shark, on “Human Being Dog” Burge now presents himself as a stray dog, with no real happy ending. Like “the shark song” this has that same kind of alt-country sound, with a bluesy feel in the choruses and Matheny’s “nah nah nah’s” backing up Burge.

“Whiskey Heaven” is one our favorite songs on the CD, with harmonica opening the swaying, acoustic number, where the Jack Daniels flows like honey, and Burge sings, with some of his most powerful singing on the record:


I thought I was king/Of this whiskey heaven
My royal crown/presided over this town
And I had a queen...Now her memory is killing me, in my whiskey heaven

This is a song that would no doubt get the cigarette lighters broke out.

“Medication,” with more Matheny nah nah nahs, sounds like it could’ve fit nicely near the end of his 2006 CD Born of Frustration, hey, anytime you hear someone say “Yeah, Billy Matheny plays in my band,” it shall rock, and the self-medicating theme of the song segues nicely into the next one.

“Intervene” is easily the most rockin tune on the CD, with Matheny picking up the electric guitar for killer solo riffage. Apparently they’re throwing an intervention party for Burge or something, over haunting acoustic and stomping kick drum. It starts out kind of dark, as Burge calmly sings “I fought the law and my lawyer won/Now I’m sitting here listening to the clickin of an unloaded gun.”

Burge screams on the chorus: “Intervene, intervene, yell at me til I’m clean/cry, cry for me. Intervene.” Burge admittedly beat the golden rule black and blue, and calls out the relatives who may or may not think too highly of him.

“Get Well” is Burge’s dreamy tongue-in-cheek best wishes Hallmark card with reverb-soaked guitar. Here’s the song with chord progressions that will most immediately remind you of a recent Wilco song.

Burge’s kids, Will and Sophia, lay down backing vocals and helps sing on “The Bugs Are Coming,” a downright cute ode to changing seasons, that finds Burge strumming what sounds like a uke, leading the young Burges through their first recording. Kind of a fitting way to end the CD, with Burge finding himself at this point in his life, comfortable with where he is, finding his muse wherever he looks, and fighting the pesky distractions of life.

Distraction Packed is a step in the more rockin direction for Burge, who obviously has no trouble writing new material. It’s just a matter of what shape it will take. With his Odd URges, Burge just continues to highlight his talents.

Thanks for this! I totally appreciate your attention to detail. It is rare.