We give credit where it's due: Dana White of Holden Caulfield's site Corn 'Zine, and what he's done with it, is nod-worthy. We just came across a review of a band called "Cobra" that we had been trying to track over the Myspace. Doesn't look like they've logged on for months. We like to hear about new CDs and if you want to hear what sounds like a cool band on a cool site check out Corn 'Zine.
Posted by WVRockscene! No comments: 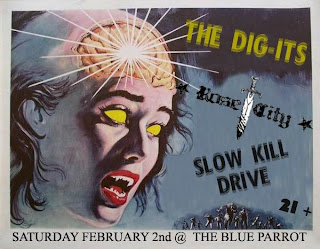 Cool shows you should go to
Posted by WVRockscene! No comments:


We got to catch a little bit of Lords of the Highway @ the Glass a few weeks back. These guys from Cleveland were rockin'. Had to leave before the Whiskey Daredevils played, which sucked. Also sucking was the fact tht Charleston's own Buckstone had to cancel due to a last minute scheduling snafu.

Irregardless nonetheless, bow down to the Lords for a minute.
Posted by WVRockscene! No comments:

Broadmoor Studios recently posted some MP3s from artists that had gone into the Huntington studio. Many of our favorite local artists have recorded there with the help of Russ Fox.
Check out Broadmoor and check out the songs...
Posted by WVRockscene! No comments: 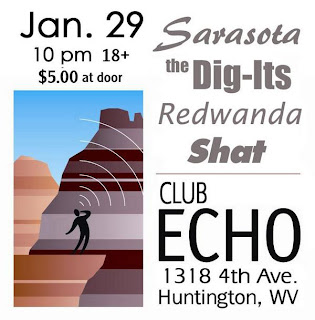 You may have already heard of Club Echo -- formerly known as The Drop Shop or Gumbys -- in Huntington. Well, we'd like to talk to you about a serious matter: the show there tomorrow night with one of our favorite area bands, The Dig-Its. They'll do a show with a couple of other bands whom we've never seen so check 'em out and if they're any good let us know.

Because, as Dig-Its drummer Bob Caution will tell you: we HATE Huntington. Well, not really, there's something deeper involved...
Posted by WVRockscene! No comments:


This is exclusive footage of The Concept from their show Dec. 22 @ The Blue Parrot with The Renfields. We wanted to go ahead and slap some video up here and couldn't think of a better way to get it rolling than with hearing about their Shoney's poo.
Posted by WVRockscene! No comments:

STUDIO UPDATE: The Ghosts of Now 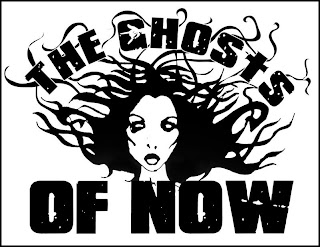 The Ghosts of Now just finished up recording a 4-song EP at 101 Productions in Sissonville, with Aaron Fisher (soon on his way to Nashville?) "pushing buttons" and Chris Ojeda of Byzantine helping to record the effort. You can hear "Ode to Billy Davis" and "ALLA" -- a song that has singer Lee Harrah saying "Alaska looks like Arizona" -- what? on their Myspace profile, and look for the CD to be out soon apparently.
Posted by WVRockscene! No comments:

We recently heard from a few band members about their experiences with promoters and/or venues that make you pre-sell tickets to play a show. They were not happy to say the least. One venue that is widely known to engage in this practice is The Monkeybar in Huntington. Our friends in Rose City recently went out there and had a most unsatisfactory experience, according to their drummer.

We talked to the guys in Belle-based A Promise Kept about their experience Thursday (1.24) night at a show put on by Youth Focus Productions. Turns out they had apparently not sold enough tickets to play this gig, even though they had sold more than a band that was allowed to play, and had been allowed to set up and sound check only to be told at the last minute to get off the stage, from what we're told. This was the night it was like five degrees or something.

After hearing about these experiences, we decided to ask the question: what are the pros and cons of pay to play? Now, granted, there will exist differences between bar-based venues, where they can just make money off alcohol, and venues that promoters like Youth Focus would work with, like a YWCA or something.

And, in case you don't know; we don't represent any venue. We just wanted to know what people thought about this and if they thought it was fair.

Here we offer band members and fans an opportunity to comment about this practice...
Posted by WVRockscene! 11 comments:

We just heard that Huntington's Jeff Ellis is going back into the studio to again work with Eddie Ashworth on the follow-up to last year's "A Front Seat for the End of the World" and, if the results are anything like that CD, it should be rockin' indeed.

Rod Lanham from Caustic Eye, who has released previous Ellis CDs, told us that Ellis would be refining his sound into a more coherent folk-rock, as opposed to what was thought to be too many divergent styles or a "wall of sound" on "Front Seat" according to people in the industry.

I thought "Front Seat" was epic, and if the people in the industry couldn't find a way to market it, that's their problem. Kind of like David Cross going off about Fox not being able to market the ill-fated but hugely popular comedy series, Arrested Development.

But whatever happens, the CD will again feature Bud Carroll on guitar and Ellis' GCW bandmate Phil James. Look for something around Summer and check out Ellis' latest blog for more info.
Posted by WVRockscene! No comments:

With their new (and final?) 13-song release, "Oblivion Beckons," Charleston's own Byzantine find themselves ironically at the peak of their craft, while simultaneously at the end of the road as a band, it seems. Their third release on Los Angeles-based Prosthetic Records finds OJ, Tony, Skip and Matt coming through with, for me, a more approachable effort than 2005's "...And They Shall Take Up Serpents" and at the same time, just as punishing as the CD that (along with their touring with the likes of Lamb of God) won so many metal fans over in recent years.

The CD opens with "Absolute Horizon," taking you into flight with jet sounds and morse code giving way to killer space thrash. In his common Biblically-referenced lyrics, Ojeda sings melodically: "A bleak situation just got bleaker/Our ties with the maker get weaker and weaker/the absolution of what will befall you/The light at the end of the tunnel will smite you."

Lyrically, the songs represent something of an apocalypse for the band.

The band's first single, "Nadir," released last fall, may have been a bit of a clue as to the band's future. It's also one of the most headbanging-est thrash cuts on the CD, as OJ asserts there are "No kings without pawns."

The title track has OJ singing that "We want to live in another world," where maybe they're not "Unattended and left to fade away," one coincidental (or, backhanded) reference to the band's label. On the scizophrenic-sounding "Receiving end of murder" we hear Ojeda sing "I use this prosthesis one fucking last time/Then rip it away and take back what's rightfully mine," And not just mine -- "ours" -- wow.

I'll be honest -- I'm not a metalhead, but I really like this CD. These songs feature enough elements of classic metal riffage and more heavy elements to appeal to a lot of metal fans. It already has.

The sad -- and messed up -- thing is that Byzantine could've been bigger, or at least able to sustain themselves financially through their music with more help from Prosthetic, I think. As it stands now -- the band is no more. As OJ sings on the final song, "A residual haunting" "As empires rise, they do so just to fall" after asserting that "these are the final words that will be penned from me."

Ojeda once told me that he could see the future of the band as a kind of DIY regional-type band. Right now, after releasing a critically acclaimed CD, and promptly folding, you have to hope that these guys aren't done forever.
Posted by WVRockscene! No comments:

Welcome to West Virginia Rockscene online - your one stop destination for West Virginia rock. Based out of Charleston, we're looking to keep you posted on the coolest bands; from shows and recordings to news, interviews, previews and reviews.

Be sure to check back soon for new content (words, music, and video) and stop by our Myspace page to hear what is playing from our favorite local artists. Last but not least please pay a visit to all the acts on our Myspace friend lists to let them know there are fans are out there.

Thanks to everyone who's helped us so far, and we hope to hear from you soon.
Posted by WVRockscene! No comments: