CD Review: J Marinelli's half of his split w/The Elsinores 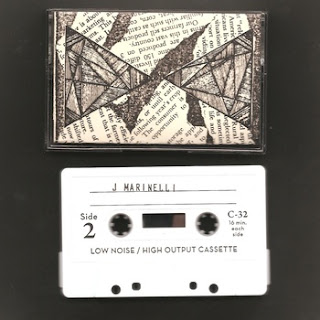 What the hell is wrong with us? Why haven’t we reviewed J Marinelli’s half of his recently released cassette split with fellow Lexington rockers The Elsinores?

Do we think fawning over Marinelli’s sometimes weird, sometimes trashy but always awesome one-man version of “maximum stomp and swing” will make us look bad? Maybe. Do we ask our own questions and then answer them? Sometimes.

But yeah it’s weird; of all the bands we’ve covered there’s never been a definitive J Marinelli article or post or whatever, and it sucks because he’s really our favorite rocker. If you’re constantly going around telling people that you’re way more punk than such and such, well, Marinelli is punk rock and DIY personified.

A few of the 10 songs found on the split won’t be unfamiliar to Marinelli fans. Again showing his penchant for revisiting and re-working his songs, the stripped down, less swingin’ version of “4,000 More Years” (originally only 400 years on his Pity The Party EP) stands out and seems more charming and almost endearing looking back on what most people agree is the worst presidency ever. Four more years? On that day in 2005, for some, it seemed like 4,000, and it seemed like world war three was imminent.

This softer sounding side (hear “Month of Mondays”) is the yin to Marinelli’s “caveman guitar” yang. Whether it’s “the scene” (and his place in it or apart from it) or the interweaving friendships and/or (mainly) animosities found therein, (the rollicking opener “Ricky Loud’s Big Choice”) Marinelli pulls no figurative punches, lyrically or sonically.

The sauntering jam “Countrypolitan” stands out, with Marinelli again opining on the scene and certain segments of it:

“Back where I don’t come from the scene ain’t been much fun/in a deep freeze around these fuckin’ middle aged babies/replete with infantile fashions oral fixations and poor life choices/sick strata of a slick niche market/wide glass ceiling revealing nothing.”


The rockin’ “Butt-Hurt Frat Priest” is maybe the one song that approaches Marinelli’s class-consciousness type bent. 28-year old “popped collar” privileged fraternity members will vote this song worst of 2012. But it’s one of the best songs on the split.

Not sure what “Post Up” is about but it’s as psychobilly as you’ll ever hear Marinelli.

Think Marinelli is beholden to the punk rock elite? “Captain Integrity” not only appears to be a swift “U.R. Dismissed” to Ian MacKaye, (“autographed my friend’s Minor Threat EP/he’ll e-bay it next week to make his rent money/selling punk nostalgia keeps you so busy/I guess that’s why you didn’t see me when I played in DC”) …but it sounds like it would’ve fit well on 2010’s Pre-Emptive Skankery Sessions, a record that, after what almost two years, after repeated listens, we’re just going to go ahead and say it: it’s surpassed or at least equaled Keep It Fake in total awesomeness.

One neat thing that Marinelli’s included on the bandcamp page is the lyrics. So not only can you sing along, you’ll appreciate the stories he’s telling and better appreciate what we think is a mature vision of “the scene,” friendships, and oh yeah punk rock. Marinelli’s vocals are often kind of hard to decipher, singing through various delay effects or at volume levels somewhere past “10” (and sometimes simultaneously), so if you know what he’s singing it will mean more to you.

Sometimes the thought briefly crosses our collective mind here that on first look, people at a bar or wherever seeing Marinelli for the first time will see him sitting behind his makeshift drum kit, banging on his guitar and see a kazoo or harmonica, wearing a raccoon skin hat, and think he’s something of a no-talent busker; it’s not always easy for one-man bands. Hear “Rebel Without Applause” and “Hey Pinkerton” on PSS for Marinelli’s thoughts on that.

But J Marinelli is no joke. There are tons of bands out there. Who’d have thought that this one guy would or could mean so much to us? That he would in essence be our favorite band? Maybe it’s a suggestive thing; that Marinelli so easily loses himself in his performances, rocking out, that you simply can’t help but feel the same, and you’ll soon be up shaking your ass and pumping your fists.

Maybe we’ll end up doing the definitive J Marinelli interview. When we talk to him we’ll thank him for keeping rock and roll relevant and rebellious. If punk rock ever needed a slap in the face or a kick in the ass, Marinelli is the man for the job.

'Nother awesome video we came across that we thought we'd share.

Sometimes something so good comes along you don’t want to ruin it by saying much about it. This is the way we feel about J Marinelli.

When we saw somebody had filmed a recent set of his from his tour, we knew it was time to get awesome. Almost makes up for not being able to catch him. Almost.
Posted by WVRockscene! No comments:

Washington, D.C.-based documentary filmmaker Amy “KC” Oden (above) comes to Huntington tonight for a screening of From the Back of the Room, her recently released film about the contributions women have made to the punk/DIY scenes over the years...

There is no vast, benevolent collective consciousness that oversees punk rock like some sort of deity. People bring their own attitudes and yes, ignorance into outlets (songs and shows) that for so long embraced, at its best, progressive causes and solidarity, at its worst, violence, racism, and sexism.

For Washington D.C.-based documentary filmmaker Amy “KC” Oden, it was an ugly incident at a local show that drove her to make “From the Back of the Room,” which chronicles the contributions women have made to the punk, hardcore and do-it-yourself movements over the past few decades.

Oden comes to Blank Gallery in Huntington Saturday night for a screening of the documentary.

“The first thing that really attracted me to punk, like so many people, was the energy,” Oden said over the phone on the way to Detroit for the Allied Media Conference and a workshop on D.I.Y. film production.

After starting going to punk shows in the D.C. area as barely a teenager in the mid-90’s, and getting turned on to D.C. punk bands like Bad Brains, Amy was indeed a punk rocker.

It was only after her feminist perspective crystallized as an adult, and one particular incident at a local show Oden was clued into, that combined to serve as the impetus to make the documentary.

“This guy was approached by a friend of his who told him she was treated really inappropriately at a show and was being pushed around and she wasn’t sure she wanted to participate in this community anymore, and it was really heartbreaking for her,” Oden said.

“He was the kind of person who’d thought always about these ideas, and he’s been involved in collective organizing for feminist events in the D.C. area. So I think something clicked in his brain and he was like ‘Alright we have to do something about this.’

“He actually got in touch with me, and we just started talking and it went from there.”

Four years later, after traveling the U.S. and Canada to interview notable female punks like Kathleen Hanna (Bikini Kill/Le Tigre) among others, “From the Back of the Room” was released in August of last year to critical praise and a warm embrace from those in the punk/hardcore/D.I.Y. community.

“Kathleen Hanna was definitely awesome,” Oden said. “Another favorite was Anna Joy from Blatz, just because I listened to them a lot growing up. She’s an English teacher at a university in California and she’s just really articulate and in touch.”

Oden said one thing that surprised her was the diversity of opinion inside of the community of rockers she interviewed.

“You know, it’s funny, you don’t think about how nuanced things are until you look at something up close, like anything, even a group you consider yourself a part of.”

Bringing the stories of how important punk and hardcore have been to these women over the years, in person and at the screenings for the documentary, is what it’s all about for Oden.

“At first I was intimidated, because you’re just meeting people all the time. But I’m into it, it’s been really fun doing the screenings. It’s almost like an immediate reward for the work that I put in. it just feels really good that people care enough about it to show up.”


IF YOU GO
“From the Back of the Room” screening
WHERE: Blank Gallery, 1102 3rd Ave., Huntington
WHEN: Saturday, July 7
TIME: 7 P.M.
COST: $5 donation strongly encouraged
ONLINE: www.fromthebackoftheroom.com/
Posted by WVRockscene! No comments: