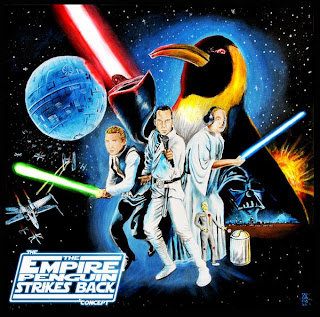 CD: The Empire Penguin Strikes Back
ARTIST: The Concept

It seems like a lifetime ago that I first heard "Guitar Pick In The Kool-Aid" on The Concept's MySpace page. I instantly fell in love with this catchy, quirky three-piece punk band from Charleston. Just as I was asking myself 'Why aren't there any rockin' punk bands in town?' I came across Mike, Ross, and Dave.

Compared to Huntington and Morgantown, Charleston is seemingly at the shallow end of the talent pool when it comes to bands. After hearing The Concept's first EP, and now this new effort, I must say they've come a long way.
It's not just media types like WVRockscene and Radio Free Charleston's Rudy Panucci that quickly got a Concept tattoo; the band earned their fans the hard way: by doing shows all over the place. From Charleston, Huntington, and Morgantown to Kentucky, Ohio, Virginia, Florida and back, The Concept's version of punk, whether in bars like the Parrot or the Glass, or at all-ages venues, seems to have won over a lot of fans.

Now to the CD -- one of the first things you'll notice is the humorous spoof of Star Wars on the cover. One thing that comes through in the band's live act is indeed their chemistry and back-and-forth joking and tom foolery. I mean, who would let someone onstage to sing the NOFX hit "Linoleum" with them? These guys. That's who.

"Penguin" starts with a pretty cool noise intro before going into one of the coolest songs I've heard them do, "Ye To The 10th Degree." It's a harder song than something you'd hear from a "pop" punk band, with a nice little drawn out jam. Pounding tom rolls by drummer Ross Anderson pull you in, and the song punches you in the face, figuratively speaking, of course.

"Last Of The Emohicans" is a short lil uptempo number that fits in perfect with our attention span. If you'd heard their first EP (what a horrible idea that was) you'd recognize stronger, re-recorded versions of "That's The One," "Not The Only," and their screamo-meets-punk version of Tom Petty's classic "Learning To Fly," which I love.

If I hadn't heard most of the songs on the CD by the time I got "Penguin," I'd have pee'd my pants with joy having got this sent in. That's the only disappointing thing about "Penguin" -- not enough songs! Only eight, and I'd already heard half of them, but that's only cuz I'm totally gay for THC.

Check out the ska-intro turned balls-out rock of "Out Of Nowhere," a song that, with Scott Ilar on organ and Greg Hunt on guitar (who also helped mix and record the CD at Cerberus), bodes well for the future direction of The Concept's sound.

Lyrically, singer-guitarist Mike Withrow on most songs seems quite desperate, whether it's the band or relationship-type stuff. There are cool vocal harmonies on most of the songs and cool "nah-nah-nah's" panned from left to right on "Nowhere," which is pretty neat. The tone and the tempo of the music kind of remind me of my favorite older Face To Face songs.

"Penguin" closes with the instrumental tribute "Ben's Song" before going into some more random noise on a hidden track. The re-recorded versions are punchier and louder (note Dave Cantrell's bass), and with Withrow helping in the lab, honing his production skills and with the band's musical path, I think the future is kind of bright for these three guys.

The Concept never needed to put a CD out to have won me over. But this CD just reaffirms what I already knew: The Concept rocks, and helps to make what I've been doing the past two years way more enjoyable.
Posted by WVRockscene! 4 comments:

Even though Byzantine is no more, we still keep tabs on them. Turns out they've posted some pre-Serpents concert footage online from like three years ago, right after Skip Cromer had joined the band.

Click here to check out some songs off "And They Shall Take Up Serpents" on YouTube.
Posted by WVRockscene! No comments: 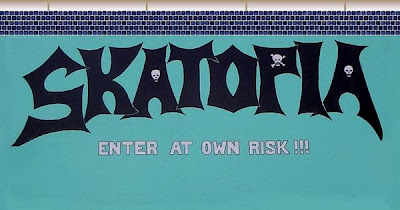 We've always had a fondness for skateboarding. Ever since we were riding Hosoi's back in the day. We came across this bulletin from Rutland, Ohio-based skatepark Skatopia, hoping to raise money for a new bowl. Yes, a bowl.

Last phase of Lula will be completed before Bowlbash XIII on JUNE 13th & 14th 2008 if the donations roll in. Please donate what you can so this can happen. Yer donations are appreciated very much. Since Skatopia has become a Non-profit organization, all donations are tax deductable.

Visit www.skatopia.org to donate now or find out more information.

Yes, they're from Ohio. But they rock from what we've heard...
Posted by WVRockscene! No comments:

THE EMPIRE PENGUIN STRIKES BACK

If you haven't heard yet, The Concept is set to release their new CD "The Empire Penguin Strikes Back" next weekend. We came across the cool new cover art (above, by Chris Woodall) on the band's MySpace page, and heard the recently uploaded "Out of Nowhere" there, and thought we'd clue people into our favorite punk band from Charleston.

Check them out online for more info and stay tuned for more...
Posted by WVRockscene! No comments:

We got to catch Jeff Ellis at Taylor Books in Charleston Friday, a solo acoustic gig for the Huntington-based singer-songwriter. He was in town with advance copies of his new CD "Covering The Distance" and performed stripped down versions of most of the songs on the new alt-country effort. Look for more on the CD soon, but check out some clips that we got...

“When You Come Back Around”

“Something Bad’s Gonna Happen”
Posted by WVRockscene! No comments: 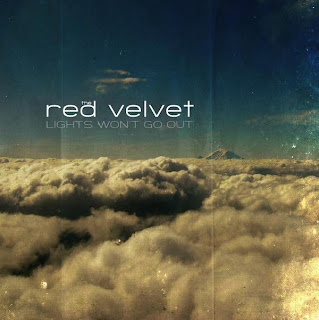 But no, we really dig this band; their songs are well written and their sound is definitely unique in this here state. We're glad they do what they do, and you should definitely check them out.
Posted by WVRockscene! No comments:

We like keeping tabs on who's doing what as it relates to new songs and CDs and stuff. A few bands that we really dig have posted new songs off upcoming releases on their MySpace pages, and we thought we'd clue you into the goings on...

First, J Marinelli has posted "Rebel Without Applause" and "She's My Cheerwine" much to our delight. If you haven't heard "Pity the Party," "Keep It Fake" or even "Stone-age Kicks" now may be the time to get in the groove with this one-man caveman of a band from Morgantown: he's soon moving to Kentucky with his significant other. Don't cry yet, though -- you can see him in Morgantown and even in Charleston at the Glass 6.13.

The Emergency has uploaded "Soaking Up The Scene" and "Misunderstood Goddamn". The songs are off their upcoming eponymous eight-song release, which they recorded in the studio of Librarians guitarist Ryan Hizer. Check out the trippy delay on the vocals in "Soaking" and get "The Emergency" tatted up on ya now -- the band is soon going on an indefinite hiatus, according to singer-guitarist Rob Wehrle. That sucks, but their music rocks. Check 'em out.

Our friends in Morgantown's Red Bones have taken some nuggs they recorded in their cabin in Fayette Co. and plugged 'em in. Check out the swinging grunge-esque groove of "I Liked You Better" and "Singin' For The Ghost" and yes, WVRockscene on MySpace has the exclusive unreleased (but of course, authorized -- thanks, Derek) version of "Miracles And Tragedies" from the band birthed out of the side of The Ones That Got Away. But now that TOTGA is "Over and Done With" we'd look forward to hearing a CD from these guys.

Out in Shepherdstown (which, from what we've heard, may soon secede to Maryland) The Demon Beat has posted "Memory Ain't Enough" onto their MySpace. Just a bit of a teaser off an EP the guys are working on, which should be cool. Check 'em out if yer out that way.

Some of these songs, you can download. Others (The Emergency) you can't, and that's alright. Check out the bands and rock the tunes, then pay us $50!
Posted by WVRockscene! No comments: