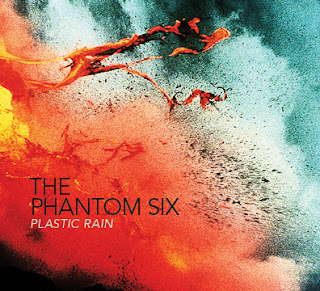 Remember that band that came along and reinvented rock and roll? These guys, man, they just made everything prior and everything that will be almost seem lame. That nothing would ever be the same, everything else sucks in comparison.

Rock and roll need not be reinvented, but yeah sometimes bands come along that evoke a particular era, with a particular sound and energy that totally envelops and straddles the years, dissolving all the crap that you've listened to, all the shit CDs you've bought and relegated to the ash heap of your own history, simultaneously reminding you how much you used to be proud to love rock and roll, to invest something in it psychologically, and why you did: because you can feel it.

Hyperbole aside, The Phantom Six is one of those kinds of bands.

It's always great to just put a new CD in, press play, and in the first few seconds, after the first few chords, think nothing more than 'hell yeah,' and commence to rocking.

Rocking is exactly what you'll be doing listening to the debut from this new-in-name-only Morgantown-area power pop/garage rock five-piece, as the record kicks off with "Corianna," and likely won't be stopped until it's run its course.

While they're busy reinventing rock and roll for you, at least reminding you how much you can love it, over 13 songs, if you haven't heard about this killer new band The Phantom Six WVRockscene is creaming itself over, here is a surprise: they aren't a new band at all.

The Poole-Sheeder connection and chemistry dates back literally decades to 63 Eyes, you may know Sutton from his own recent solo work, but maybe talking about how awesome The Phantom Six is summed up thusly: Billy Matheny plays bass.

Sure, there are good bass players and there are dudes that kind of just show up; bassists have a long, rich tradition of being much maligned (think Murderface and Sid Vicious) but in a lot of the most rockin' of bands bassists really contribute, be it as songwriters, singers, musicians and performers.

We will include Matheny in the more favorbale category of bassists. If you've missed his solo output in recent years, questioned why there's been no follow-up to Born of Frustration in the lifetime since it was released, as he's more recently joined up with Athens, Ohio's Southeast Engine and joined on with Todd Burge, only cosmically seeming to seal up some cosmic, sonic circle now with Poole and Sheeder, among other projects, previously in Moon and now as The Phantom Six, he helps form what sounds like some super group or something.

Oh, the record. Make no mistake dear friends, okay, dear readers, Plastic Rain is a great record. Recorded at Poole's Zone 8 Studios, with a live and loud final feel, on favorite tracks like "Inspiration," the hard rockin' "About Love" and 70's rock sounding "Losing Control," to the more jangly Americana of "Shades of Sunday" and the somber "Big Airplane," (killer solo) with lyrics mainly dealing with some combination of chicks, love and small towns ("everyone wants to fall in love, if only for one day," Poole sings on "Inspiration") and with a plug-in-and-go attitude, people not familiar with Moon will be kicking themselves now.

With super-tight vocal harmonies, backing vocals, enough requisite "na-na-na's" the songs, describe them how you will, who they remind you of, what you call them, really just might remind you how much you can love a rock band.

While the songs are simply structured sing-along verse-chorus-verse types for the most part, there's enough instrumentation, enough of an ambitious sonic layering with reverse guitar parts and organ thrown in with the solos and the crashing cymbals, to make the songs great. Everything about a kick ass rock band is on display on Plastic Rain.

It's just a shame that the band had to wait until this cold Fall season to release Plastic Rain. This is a record that has a Spring/Summer feel to it. Like you could take some long undirected road trip with only the 13 songs as accompaniment, some sort of exciting new infatuation.

But regardless of the season, whatever year it is, most every fan of rock and roll will be falling in love with this killer new Morgantown band, The Phantom Six. This record not only transcends time, it kicks ass. "Favorite new band" is only a technicality for these guys.