It will come as no surprise to readers of this blog that bands NOT from West Virginia, swinging through our fair state as part of a tour, are sometimes featured in some form or fashion in my freelance “work” covering bands for the Gazette, Herald-Dispatch, and WVRockscene.

Some bands you kind of lose track of when they leave, then, being part of the media catch up with when they come back through. Some bands, I’ve been lucky enough to keep in touch with at the same time becoming a fan of. The list of said bands is long and varied: Cleveland’s Whiskey Daredevils and Cambridge, Massachusetts’ Arms and Sleepers are maybe the best examples.

But I’ve become not only a fan of New York City’s Glorious Veins after talkin’ to em for the H-D earlier this year, I’ve been keeping in touch with drummer Lui “Wiggy” Colmenares on Facebook even when his band is not in town.

So in anticipation of the release of their debut video Matt’s Song (NYC) today, we thought we’d not simply repost it here, but talk to the people behind the song and the video. The song, off their debut LP, is the only one penned by guitarist Matt Howels, who hails from the UK, came to NYC, and promptly helped get the band started after they all met on Craigslist.

Howels lifted the lyrics from works by friend and NYC poet and writer Ryan Buynak, and the band welcomed Craig Holmes (Shutter Slice Films) over from across the pond back in September to shoot the video.

We caught up with Holmes and Buynak to see what it’s like influencing, working with, and being friends and fans of, NYC’s The Glorious Veins...

Ryan Buynak talks about becoming friends with the GV and the words behind the song...

WVRockscene: You said Matt is one of your best friends? How did you guys meet?

Ryan Buynak: Matt is my British brother. He and I met in the maze that is the New York City restaurant world, and instantly connected over our shared love of music and literature. The universe wanted us to be friends.

-----
WVRockscene: You went out on the road with the band, how good have you got to know the guys?

Buynak: Let’s just say I have come to know the Veins quite well and that sharing the stage with such an amazing band is a long-awaited answer to an old dream of railroads and vagabond hearts.

-----
WVRockscene: What were the poem(s) that Matt lifted words from into “Matt’s Song,” and how cool is/was it to know that your words resonated with him so much that he’d turn it into a song?

Buynak: I’ve always wanted to write a song, but I can’t play music to save my fucking life. It was Matt’s idea. He’s actually been in a few narrative nooses of mine, here and there. He came to me one day asking to use the poetry in a song and of course I said yes.

He picked through a dozen and ended up eating poetry from a few verses. The opening lines of the song are from a piece called Where is 12? which is in the next book. Another is called Midnight Lions. There were a few more but I forget. They all had this sad Manhattan vibe...and somehow they (The Glorious Veins) came up with this awesome fucking song. The record is framed in my apartment. It is an angel’s honor to be involved with cutting edge music and art. Coyote Blood will kill you.


Craig Holmes of Shutter Slice Films talks about the video...

WVRockscene: So you came to the States back in September to shoot the video for Matt’s Song, how did you like your time here? Fun or work or both?

Craig Holmes: I had a great time in New York. The last time I was there I was with my girlfriend at Christmas just gone. I loved it so much so I was stoked to go back. I spent a fair few hours each day shooting footage around the city to make sure I had all the shots I needed for the video. I made sure there was plenty of time for fun though, taking photos and seeing the sights and eating amazing food.

-----
WVRockscene: How did you meet/know these guys? You’re from the UK right so I’d assume you were/are friends with Matt Howels? Know him or the band long?

Holmes: Well my girlfriend’s aunt and cousin, Mark and Maggi, live in Queens. Mark uploaded a picture on Facebook (of course…everything starts with Facebook) of the band playing a rooftop gig. I saw it and thought that would make an awesome video. So I asked Mark if he knew the band. Mark is great friends with Lui so he told me to add him. I started chatting to Wiggy and suggested me flying out. I loved their sound, they were digging my work so it seemed like a great idea.

Holmes: Well I didn’t get to talk to Matt until I met him in Queens. Then we chatted via email, I asked him what the premise of the song was from his point of view, everyone can interpret a song but I wanted to make sure that I was hitting all the right notes with the video.

The issue we had was that it was difficult to get everyone together due to other commitments, so the only decent filming I had with the band was the live gig. The rest of the footage that I had was of couples in New York, I spent a few days stalking people in bushes etc. trying to avoid getting punched/arrested. When I got home I was stitching the footage together and it looked good but there was definitely something missing.

Will [Webb] is actually a lifelong friend of mine, he is from South Wales also. His girlfriend Catalina [Zbar] is from Argentina and was visiting Wales for a few days. I showed them my footage and pitched the idea to them of this couple who meet, and fall in love in New York and they were super keen to help me nail it. A lot of the footage is actually filmed in Wales, I had to be quite cheeky with the way it was filmed, that’s why there are a lot of close, intimate shots. Ironically, Cat and Will were taking a trip to New York, and there was a few shots that I needed. So I gave them a camera to capture some extra shots, to make it look like they were living in NY.

As far as acting, they were superb. Can’t fault them at all, it was a lot of fun and there is so much good footage. They are as excited for the release as I am.

-----
WVRockscene: It definitely looks like a professional job, how proud are you of the final product and how excited are you for GV fans and people in general to see it?

Holmes: I am really happy with the final piece and anxious/excited for the release. I have worked on a lot video projects, collaborating with other artists, but this is the first one that I have produced on my own from start to finish.

I’m hoping it gets some great feedback and me more work in the States. As for the GV fans, I think it’s something they deserve. The GVs have such a good following and the music is outstanding, they just needed something for people to see as well as hear to really appreciate how incredible their music is. I’m sure this will help them in their path to stardom, and I wish them the best of luck.

Colmenares, talking about the video and GV fans... 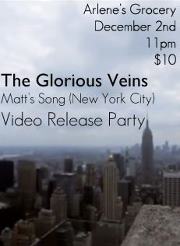 Craig made it all happen and we are very pleased with the results. Hopefully we get to do another one...Definitely easier for fans to share our music with friends. We’ve been wanting to do a video for so long but given limited resources, we’d rather record a song than spend money on a video.

I am grateful that we have friends from across the pond that would fly all the way to the US to help us out. THANK YOU! THANK YOU Craig of Shutter Slice! And to all our friends that have been helping us along the way.