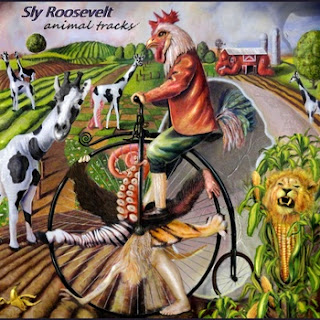 If he’s referring to the record, he’s right.

You have to imagine that Sly Roosevelt knew what it was doing all along to pull together what even at first glance appears to be a surrealist petting zoo-themed concept record. On Animal Tracks, though, this Huntington-based indie rock band not only ties together the album art (ably done by Jarrod Schneider) with songs like “Bluejays,” “Lion,” “Minks” and “Wolf,” but a populist, anti-Wall Street manifesto theme seems to have buried itself in some of the lyrics of these songs.

Heck, the band samples 90 seconds worth of Teddy Roosevelt’s August 6 1912, “Confession of Faith” to open the record.

Alexander Durand (bass) and Matt Marshall (drums) have steered the band DIY-style through their own studio in addition to their rhythm section role. Megan Durand adds so much to the songs with synth and piano part.

Standout tracks for us are “Lion,” (which you may have already seen the YouTube “Meet the King” series and video the band did for the song) “Opportune Moment,” “Atoms,” and what makes this CD something more than just animal crackers, “Elijah,” which finds McDaniel ending up on the no-fly list with his conspiracy theory lyrics:

Not only is the CD something you should buy just to see how the art flushes out the very rich, animal-infested landscape Sly Roosevelt has created here, but this seems like a band that would have an energy live that may be hard to capture on a record. Jon Parsons (mixing) and Russ Fox (mastering) deserve kudos have done that here, we think it would just be cool to see them rock these songs out live.

But yeah, Sly Roosevelt has something special here. Animal Tracks is a great record and a great full-length debut for these cats.