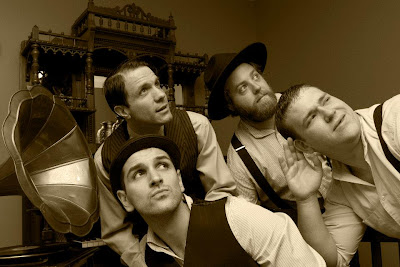 
When WVRockscene was in its infancy, an important discussion was had between the H.M.I.C. here, and another nice dude who ran an alternate, West Virginia-based site dedicated to covering local (and beyond) music. Haha it’s crazy to think that you can’t find my name hardly at all on this site, the first thing you see on this site when you revisit it now, is the true identity of your host, narrator blogging, guy.


But as far as West Virginia-based sites dedicated to covering local music went, it was an important philosophical chat. Should WVRockscene focus more on covering local bands, or expose readers to bands we like who might not ever even play here?


Well, for what it’s worth, the first approach kind of won out. But since “the dark ages” of mid-2007 or so, not really blogging or doing stuff for newspapers, up to now, we’ve kind of just naturally fell into the habit of being in touch with bands who might pass through periodically. Exposing these bands, and more importantly developing kindly acquaintanceships, to our fellow Mountain State residents is something we take seriously, and really like.


So, speaking of time periods, the “quirkadelic,” Hampton, Virginia-based act Uglyography came across our radar. Time travelers they may (or may not, hilariously) be, we caught up with front man and bassist Matt Thomas in advance of their stop at the Glass Wednesday. Seriously check out the tunes and their site, you will laff…


WVRockscene: You guys set to hit the road for a week or so? Got everything packed? Is this your first big out-of-state run of shows?

Matt Thomas: Yes, I believe we are all set and ready. Booking and preparing for this tour has been one of the most challenging tasks I’ve taken on for a long time, being a relatively unknown band at most of our stops. Now that all the booking and logistics are worked out, we just gotta pack our bags (and not forget Tums, Band-aids, vitamins and all that other necessary rock star stuff) and we will be rolling!

This will be the first time that Uglyography’s current lineup has played outside of Hampton Roads. In 2009 I toured Uglyography as a solo act and went out of state but nowhere near as far and wide as we are going this time. We hope to do as many out of town shows as in-town from here on out.

Thomas: DJ’s time traveling beard has gotten him into a lot of trouble. Jack was the only one who actually wanted to time travel, and the rest of us got here by chance happenings in the universe that have a one in a billion chance of occurring. Since we were all spit out into this overpopulated and overbuilt time together, we figure if we bond together we could give audiences a taste of when we came from and hopefully find our way back there.

We’re not sure what to make of the current state of the music industry but we do hope that audiences will lend a sympathetic ear to a bunch of outcasts who are trying to figure out what it is that people want to hear in this time. This overwhelming dependency on electricity that society has adopted is making it easier for us to play to larger audiences than back in the 1870’s so I do feel we can use that discovery to our advantage. All we really wanna do is find the magic frequency to send us back to our various home times, and so the more audiences we play for, the better chance that magical frequency will be hit. And, we hope the frequency will ring strong with our audiences as well.

-----
WVRockscene: Seriously though “Undercover New Machine” seems to have been warmly received since its release in early 2011. How cool has the warm reception and the favorable coverage been to you guys?

Thomas: We could not ask for a better local reception. Most of the Hampton Roads publications that mention music at all have featured something about “Undercover New Machine.” Our CD release was extremely well attended, reviews have been stellar, and the CD was nominated for Best CD in the Veer Local Music awards. The support from the local industry is very flattering and encouraging. Our fan base is growing slowly but steadily and all this promotion and support is adding hot fuel to the fire.

-----
WVRockscene: You operated as a solo performer until recently, between the whole time traveler angle and theme, how if at all has your vision of what Uglyography is and will sound like changed as you’ve moved it into a band?

Thomas: The songwriting process was very much the same for both albums (2005’s “Love Boat” and “Undercover New Machine”). Both albums were recorded on my own before I met my bandmates. But these guys are much, much better guitarists and drummer than I am, so the songs now have a whole new dimension to them, while keeping the same quirky songwriting style that I have settled into.

As far as the time-traveling thing, that has evolved as time has gone on. I suppose the seed for the idea came when I commissioned the UK lowbrow artist Doktor A. to draw up the album cover artwork for “Undercover New Machine.” I had a very specific idea of what I wanted, and had been a big fan of Dok’s steampunk style and his line of toy characters called the Mechtorians. He provided me with a fresh new aesthetic including the parchment paper background, a slick logo, and a general 18th century feeling that has been present on the website and CD case since early 2011. Not until earlier this year did we take it a step further and build ourselves a steampunk banner stand and start wearing 18th century attire to add to the theme. I think we have found our niche and will be keeping it in mind as we move forward. It is impossible to say where this is going, we don’t know ourselves.

-----
WVRockscene: The lineup, time travelers you guys may be, has just recently changed. How have DJ Blake and Jack Morgan fit into the band since joining late last year?

Thomas: We had the need to replace a former guitarist, and DJ stepped right in and sounded fabulous on his own. About three weeks later, DJ’s friend Jack said he still wanted to try out. My first reaction was that DJ was already set as the guitarist and we would be fine as a three piece since that’s what we had been before the switch. But after hearing Jack play “More than a Miracle” at an unofficial audition, I was sold! The “dueling guitarists” as I like to call them, complement one another perfectly and the sound is really big and full now. And all of my band mates are great guys. And, we all get along and have a great time together, which is probably the most important thing when it comes to making a band successful.

-----
WVRockscene: Anything cool in 2012 you guys are looking forward to? Shows or recording new stuff?

Thomas: We have a project slated to begin in April. We will be collaborating on a couple of songs with a local hip-hop artist called Shakespeare’s Ghozt. He has performed with us one time so far, rapping his rhymes over top of a couple songs from “Undercover New Machine.” We want to perform with him as much as possible and will be producing new recordings of those songs along with him. We will probably record a few others while we are at it and hopefully release an EP later in 2012. So yeah, good things are on the horizon!

-----
WVRockscene: You guys are playing seven states in as many days on this tour, is this your first trip to play in these places? Obviously you’ve never played the Glass, hoping to turn some people onto your band in the current time period?

Thomas: This will be our first time at six out of seven of the venues. I played at The Hideaway in Johnson City back in 2009 and really liked the people and atmosphere there. We are looking forward to meeting all you fine modern folks this time around and hopefully return again to see you before too long! That is, if we haven’t hit the magic frequency and traveled back to when we came from.