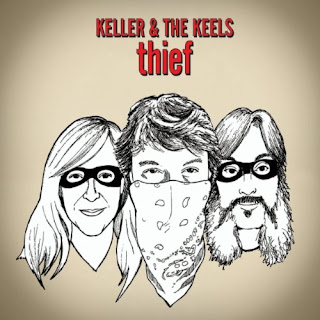 If Keller Williams is reading this, we just want to come out and admit that we didn't pay for Thief. But we didn't illegally download it or anything like that. Judging from Williams' liner notes, we don't want to get off on the wrong foot.

But let's set up exactly how much we wanted to hear the CD first.

A few phrases we've coined here include: "The best things come to those who wait," and "Better late than never." Both describe our feelings on landing a copy of this 13-song cover CD.

Getting hooked up with the second installment of Keller Williams' collaboration with Larry and Jenny Keel seems like some sort of cosmic convergence of the most awesome kind.

It's a funny story; when Thief came out a while back, we thought about trying to scam our way out of a copy, acting like some sort of big time media outlet for new music -- you know: fiction!

But we didn't try. But still, we were definitely keen on hearing the latest collaboration between these Virginia-based artists.

Well fast forward a few months and we were contacted by the Keel's very nice and awesome PR lady about setting up an interview for his show at 123 Pleasant Street in December, and oh by the way, she'd gladly hook us up with the CD, probably not having any idea of our love of Keel and the first Keller and the Keels CD.

Having had picked up a copy of Keller and the Keels' Grass at a Larry Keel and Natural Bridge show at The Sound Factory a few years back, we pretty much knew Thief would be awesome. We actually got to meet and chat up the Keels at the show for a now long defunct local music internet show; good people.

And in case you didn't know yet, Keel, the critically acclaimed, much loved flatpicking master, shreds. It would be great to hear him play some metal. Jenny rocks the upright bass and, together, Williams (a star in his own right) and the Keels take songs -- maybe not even their favorites, exactly -- and, kind of like The Ramones did with songs from rock and roll's past, put their own unique countrified bluegrass stamp on them.

Remember when you first heard about a bluegrass cover CD of AC/DC songs, and your mind kind of reeled? Hearing Williams and the Keels cover Butthole Surfers, Cracker, Presidents of the United States of America, The Raconteurs, and yes, Amy Winehouse, might seem like a stretch, but they nail it.

They even cover "Sex and Candy" by Marcy Playground. Remember that friggin song? This might make getting that Marcy Playground tattoo seem like a good idea, which, maybe not so much.

More obvious songs for the trio to steal may include "Cold Roses" by Ryan Adams, "Wind's on Fire" by Yonder Mountain String Band, and "Mountains of the Moon" by the Grateful Dead. Bookended by a pair of Kris Kristofferson songs -- he stands to make the most money off Thief royalties, as Williams points out in the liner notes -- this is a great CD to play on a sunny day aimless drive around town, doing chores, or anything else you wanna do.

The most awesome song for us to hear was "Pepper" by Butthole Surfers. Like over a decade ago, we wore out that Electriclarryland cassette we had. Williams even does a good Gibby Haynes voice.

But the title of the CD is a slight dig on the whole stealing other people's songs to make a record, and the tendency of you people to download music for free, and not supporting the artists.

Even though we were late getting this, we are so glad to have got hooked up with it. Apparently there was a Keller and the Keels Play Your Couch type contest. Hopefully that person cleaned off their couch.

But for us, we're gonna go burn a Grass/Thief compilation CD. And of course, we won't let anyone steal it off of us.
Posted by WVRockscene!