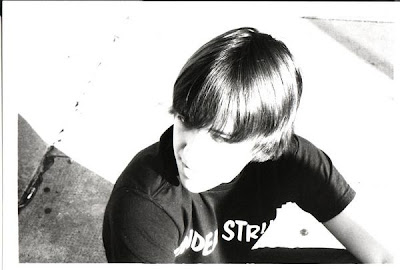 In part dos of our Q&A with Shepherdstown-based rocker Tucker Riggleman, we talk to him about The Demon Beat, his writing career, and how he came across Joey Fuckup and Whiskey Brian...

Rockscene: What is up with new Demon Beat stuff?
TR: Our newest EP (still untitled for now) is being mastered in Chicago at Saff Mastering. It will have most of the newer soul-type songs that we've been playing on it, so we are really excited.

Rockscene: How has the band changed since forming?
TR: Well they started out as a two-piece. It was just drums and guitar/vocals, so everything was pretty stripped down. I remember the first time I saw them they had this one 40 minute song that was really amazing. They really blew me away. They were probably the loudest band I had ever heard live and there were just two of them.

Eventually they asked me to play bass at a couple of open mics with them and it just kind of happened. We had great chemistry from the start, and after years of trying to play with other people I instantly knew that this was the band for me.

As far as how the band has changed musically, we have definitely developed our own style over the past couple of years. Once I joined, Adam had the freedom to write more ambitiously and do a lot of really interesting guitar work. Before, they kind of just had these really awesome riffs and drum beats and they would just play the hell out of things and it was awesome, but now we have a fuller sound and it's a lot of fun to mess around with. As far as style goes, we have definitely gone in a more soul-type direction. We all got really into old Stax Records stuff and began writing more dynamically. Soul music is all about building dynamics - quiet/loud, soft/hard, it's all in the tension. I'd like to think that nowadays we have taken the older blue stuff and the soul stuff and really developed our own style.

Rockscene: How did you meet/know those guys at Whiskey&Waterbeds?
TR: We knew of Brian through a mutual friend in the Fox Hunt, but I think they just kind of messaged us one day and dug our music. What those guys are doing is really cool. I think podcasts are a great way for people to discover new music.

Rockscene: Are you still involved with Hard Rain Magazine?
TR: You know, I was and assume I still am, but those guys have kind of went under the radar. They are based out of Huntington, so I have always been slightly out of the loop, but yeah, I don't really know what happened. I'd love to keep contributing and helping out because I think what they do is also really cool and important.

Rockscene: What bands West of Shepherdstown (in WV) do you particularly dig?
TR: The only other bands I've really listened to consistently are the Morgantown indie bands like Dave Bello and His God-Given Right, It's Birds, and Librarians. I think everybody should check those guys out, because what they're doing out there is awesome. 123 Pleasant St. is a great venue to have as a home base. I'd love to get into some more WV music, I just haven't really been exposed to much outside of our scene and the one up in Morgantown.

Rockscene: Will The Demon Beat ever get to play in Charleston?
TR: That's the million dollar question isn't it? We'd love to and we talk about it a lot, but we'd need at least two shows back to back to make it worth our drive, especially with these awful gas prices. We are starving musicians too, so we would definitely need at least two shows in a row. We've heard really good things about The Empty Glass and would love to get down there at some point and rock in the capital.