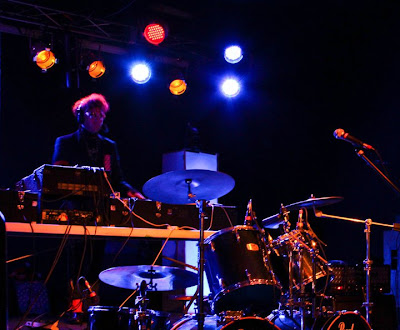 Brett Fuller (DJ Franklin Fuckin Furnace) hosted Tower of the Elephant and Horseburner as part of the V Club's This Ain't No Disco series April 28th...


4/28/11 @ the V Club was an another classic in the ongoing This Ain't No Disco series Featuring DJ Franklin Fuckin furnace and local Huntington acts. I've been lucky enough to not only play a This Ain't No Disco with The Wizards of Ghetto Mountain but I also DJ'd a set as DJ Gilbert Grape's mom. lol.

On this installment of This Ain't No Disco, joining DJ Franklin Fuckin Furnace were local lords Tower of the Elephant and Parkersburg doom merchants Horseburner. DJ Franklin furnace opened the night with a great set of molten rock on the 1's and 2's. The great crowd soaked up it and the atmosphere was electric.

Tower of the Elephant's quick rise to doom supremacy has not surprised anybody in town. The band is rounded out by some of Huntington's rock vets such as Blair Yoke on vocals who has been in punk bands Beer For Blood and Killbot, Garrett Babb who was also in Beer for Blood, and was ax slinger with myself in Wizards of Ghetto Mountain, Josh Harshbarger on bass who was in Beer for Blood, and is in the great alt-rock ringleaders Universes, Jason King on drums who played guitar for the Black Knots, and Mike Schritter on guitar who played for Sarasota.

Tower of the Elephant just recorded an EP and it sounds amazing. You're seriously gonna want to get your hands on it. Great stuff. Also look for guest vocals from yours truly at the end of a track.

Now on to the show.

I've seen Tower sets a few times and each one keeps getting better and better. This set in particular was amazing. Real thick fuzzy doomy tone, loud thunderous drums, Harshbarger laying down the low end, and Blair Yoke's fantastic vocals that I've watched evolve and get stronger with each set they play. This set was extra mean.

Slower than usual which I loved. The songs are being churned out effortlessly by the guys and they are developing a doom swagger that comes with experience. This band is a powerhouse and if they last they will be going places. They had the crowd in the palm of their hand for the whole set and I got to do my vocal part in Journey of the Leonids. Killer set by Tower.

Horseburner is a band that are simply stunning. Imagine Thin Lizzy, Sleep, Sabbath, mixed with some hardcore. Great band. I have had the pleasure of playing with them with The Wizards of Ghetto Mountain on several occasions.

They took the stage like heavyweight champs with nothing to prove. An amazing set of molten doom, twin guitar harmonies, and great gang vocals. Almost each member shares vocal duties and the vocals are hardcore style so it's a great blend of doom, 70's rock and hardcore. You might not think this would work but Horseburner pull it off flawlessly.

Horseburner are starting to get a following in Huntington and there's a reason why. They have chops. Talent out the ass. Great Tone. The crowd ate up every second of Horseburner's set and anybody that ever seen them before left believers. Another amazing set from Horseburner.

Franklin Fuckin Furnace closed the night with another great set of tracks that rocked the house. All this for $3 you just can't beat that. Another great show at the V Club.

The V Club is the best live venue in Huntington since 1318 4th Avenue is no longer a music venue. They have shows for every taste in music so check http://www.vclublive.com/ for all concert updates and say hey to Don Duncan at the door for me.