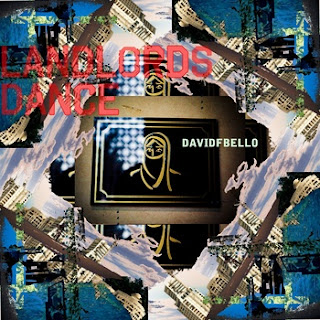 Don’t let it be said there’s any musical standard that tyrannizes Morgantown’s David F. Bello. Even though he calls himself a punk, Landlords Dance, Bello’s week-old, 15-song release is not punk rock at all.

Or maybe it’s the most punk thing ever?

The vibe brings to mind stuff that may or may not have been found on Beck’s albums from 1994 or so, pre-dating and including Odelay. From one artist to the next, maybe not a bad comparison. Who knows?

Just like the collage type artwork for the CD, the songs themselves have a structural disjointedness to them in parts, as Bello moves from acoustic awesomeness to experimental, electronic psychedelia.

Cool sounds and songs make for a delightful trip; definitely worth the $3 U.S. dollars you’ll pay to download it.

Bello layers/buries his lyrical sincerity underneath the random (?) genre-hopping. He gets downright nasty in some of the songs, touching raw nerves all up and down as he talks about various states of domestic upheaval.

You’ve seen the pictures of the Mayday Prom nights or whatever they have at 123 Pleasant Street, with the 80’s type Trapper Keeper neon art? Well, maybe the standout track on Landlords Dance is “I Said I Can Say What I Want,” sullen techno pop that would seem to play well in something like “Sixteen Candles” or something.

The song stands out like so many sore thumbs; shimmering, overdriven guitar, trashy snare hits and stabbing synth, the song breaks down into almost distracted solo riffage before burying the listener under a wall of warm, deep sound.

Really as much about messing with levels as anything else, this is a song that we couldn’t make it past to hear other standout songs like “TB Comes to Silly Fort,” the angry drum & bass-meets acoustic rock of “Burn Up In Car,” “The Alumnist,” (Bello gives you and your mom the finger here) and the heartfelt acoustic, Casio synth n’ string flavor (w/800-pound kick drum) of “I Know This,” maybe our second favorite song on the record.

And that’s the thing to take away from this incoherent freshman-level review; it would be great enough just to listen to “I Said I Can Say What I Want” over and over again -- like a lot of great records there’s that one song you want to hear over and over again -- but there are enough cool songs and sounds on Landlords Dance to make it a standout record.