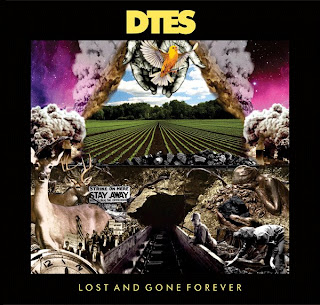 You know how they say if you squeeze a piece of coal hard enough it turns into a diamond? Well, Matt Page and Dream the Electric Sleep, the Lexington, Kentucky-based prog rock four-piece, have done just that on Lost and Gone Forever, their recently released debut concept record about life as an Eastern Kentucky coal miner.

Fourteen songs, 76 minutes, played out in three acts and told from the perspective of a husband and wife, this is one great record.

Evoking something like a heavier sounding Pink Floyd with the singer from Queensryche, with an experimental, synth-flavored sample-based bent ((Ambient noises and samples ranging from air alert sirens to railroad crossing bells used as percussive accompaniment on a song!)), the entire vision -- from the lyrics describing the trials of an Appalachian miner, the wife who waits on him and worries about him, to song samples and excerpts from Harlan County, USA, down to the cover art for the record (done by Page and bassist Chris Tackett) -- is tied together quite beautifully and coherently on the debut effort.

The entire concept of the record is summed up in the first part of the title track, which opens the record:


“Speak of what you know
The hills and of coal
And love, lost and gone forever”

This is to say nothing about the very rich instrumentation, driving arrangements (maybe most notably “The Joneses” and “Sundown”) thrown in with the Pink Floyd nods (“Canary”), beautiful chord progressions, bridges kicked out into jams, and Page’s emotive, almost faux-European singing and vocal range (this guy can belt it out) underneath angelic vocal harmonies.

You might think that bands these days don’t have the vision to pull a concept record off -- much less a GREAT concept record. The DTES sound is symphonic hard rock with enough of an Appalachian roots sound (banjo, acoustic guitar) to anchor the goosebump-inducing epicness of the songs.

You can hear Tackett’s influence on the sound on “The Joneses,” as the song breaks down into guttural Hyatari-like organ-backed doom. The LFO/noise jam on “Feel My Way,” taken with the ambitious vision and sound of “Echoes Chasing Echoes” -- somber acoustic and banjo, haunting e-bow sound and blasting cap drums found on the opening title track -- put DTES’ more experimental side and sound on display.

The entire record is one big standout track, but the heart of the order, the Appalachian anthem “Roots and Fear,” “Stay on the Line” and “Hold Steady Hands” hold Act II together quite nicely. Page sings on the latter:

As the songs play out and the record reaches its climax by the time you get to the stellar “This Is This,” (our personal favorite) and the final song, their adaptation of “Que Sera Sera,” “What Will Be,” you realize the end, in this case death, is sort of a beginning, and, fading out, the entire record neatly folds back in on itself, and you can begin anew listening to the whole thing all over again with the opening title track.

Calling this CD a diamond in the rough only plays on the very hard coal miner life described so vividly by Page. This is a diamond with very smooth edges, two years in the making, it’s a quite thoroughly polished finished product and requires only those listen to it as a record to get the full picture.

Lost and Gone Forever is indeed the crown jewel of releases so far this year from local and regional rock bands that we’ve come across; it’s really sublime, a true masterpiece of a record.

--- Dream the Electric Sleep will release Lost and Gone Forever Saturday, April 9 at the V Club with Suede Brothers and John Lancaster
Posted by WVRockscene!