Q&A w/Molly Mess of Some Kind Of Nightmare 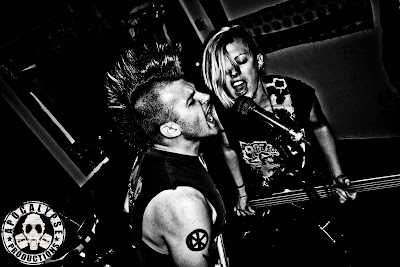 Ohio natives Molly and Chy Mess, who front the San Diego-based punk band Some Kind Of Nightmare may have had to cancel their show at The Empty Glass Wednesday due to not having a drummer, but that will not stop us from running this fun, fact-filled Q&A. Hopefully they come back to West Virginia soon and we can run this feature in print and get paid for it. Who knows?

“…We’re still without a drummer so we had to cancel on our end. We’re very disappointed in this as we’ve never been to Charleston,” Molly, the singer-bassist said over email. While the band has found a drummer for a show in Indianapolis for its Never Gonna Stop Tour, not having a drummer and keeping her band going with her husband, Chy, is no big deal compared to the fight Molly may end up fighting: breast cancer.

WVROCKSCENE: HOW HAS THE NEVER GONNA STOP TOUR GONE SO FAR? HIGHLIGHTS AND/OR LOWLIGHTS?

Molly Mess: The Never Gonna Stop Tour was really good and really harsh at the same time. It was good because we got to see a lot of our friends across the country again. Booking the tour started getting easier. But it was extremely difficult because we were touring in a ‘76 Ford Econoline so we were breaking down every day. Then we inherited a ‘94 dodge ram b250. Then we had fuel pump issues with that van. So we changed the name of the tour because we felt it was cursed hahaha.

We were able to take my 16-year old sister on the road with us for about a week. That was really awesome! We also got to play with our friends from Berlin called The Fever. That was great seeing them.

-----
WVROCKSCENE: MOLLY YOU ARE FROM OHIO ORIGINALLY? WHAT PUNK BANDS INFLUENCED YOU TO WANNA BE IN A PUNK BAND, WHEN DID YOU GO TO SO CAL?  DESCRIBE MEETING AND EVENTUALLY FALLING IN LOVE WITH CHY.

Molly: Rancid and The Sex Pistols were a major influence on my life. Rancid’s album “Let’s Go” changed my life. Chy and I both came from broken homes, as it always goes. I had never heard anything so uplifting. It gave me a sense of self-worth. Chy’s album was Rancid's “…And Out Come The Wolves.”

Chy and I are actually both originally from Ohio. We met in middle school and started dating when we were 17. We were both looking for a punk to be with. In the small towns that we grew up in, punk was an extremely rare thing. We were both so passionate about it. We became inseparable. About two and a half years into the relationship, we formed Some Kind of Nightmare.

-----
WVROCKSCENE: YOU JUST HAD MESS FEST IN ATLANTA OVER THE WEEKEND HOW SPECIAL WAS THAT? IT WAS RECENTLY ANNOUNCED THAT SUPERSUCKERS FRONT MAN EDDIE SPAGHETTI WAS FIGHTING CANCER, AND YOU SAW A LOT OF OUTPOURING OF SUPPORT FROM BANDS AND FANS. MOLLY HOW SPECIAL IS IT FOR YOU TO HAVE YOUR FANS BASICALLY SAY YOUR LIFE MEANS SOMETHING TO US?

Molly: Mess Fest was incredible. It really meant a lot to see so many people, friends and strangers, showing support. It was really appreciated that our friend Kevin Stokes filled in for drums. It was a little difficult that we didn’t have our own drummer. It was somewhat difficult having the focus on the health issue. It was easier when we were on the road because we kept so busy that the health issue was more in the back of my mind rather than being the main focus. We’re so grateful for our friend Reed (a cancer survivor) and his band AboveRepute for putting this benefit show together for Chy and I.

-----
WVROCKSCENE: MOLLY WHAT IS YOUR HEALTH SITUATION RIGHT NOW, AS FAR AS FIGHTING CANCER?

Molly: The health situation right now is testing to see if it is breast cancer. I have a tumor in my left breast and an unidentified lump in my lymph node area under my right arm. At this time we do not know if either issue is cancerous. I just made an appointment today to get a mammogram and an ultrasound for testing. The not knowing has been terrifying.

-----
WVROCKSCENE: HOW IS THE DRUMMER SITUATION RIGHT NOW? YOU GUYS HAVE TO BE LIKE THE MILLIONTH BAND THAT HAS HAD TO SEEK DRUMMER HELP RIGHT? SEEMS LIKE IT MAKES YOU GUYS EVEN MORE PUNK ROCK HAHA...

Molly: Ah the drummers! We’re still trying to figure out our drummer situation. We live on the road, so it is very difficult to find someone to commit that is in a healthy state of mind, to put it politely. We’re a bit bitter right now, because Chy and I invest money into drummers who bail on us. Today we bought a drum machine. Hahaha so we won’t have to keep canceling shows because people back out and bail on us.

-----
WVROCKSCENE: MOLLY HOW COOL IS IT TO BE ABLE TO MAKE THIS KIND OF MUSIC AND SHARE THESE EXPERIENCES, FOR GOING ON A DECADE NOW, WITH THE PERSON YOU ARE ALSO IN LOVE WITH?

Molly: I started out singing. We wanted to take the band and explore California. So we packed everything we could in a two door Hyundai Accent and moved to San Jose. The other band members stayed behind. We stayed in San Jose for about a year then wanted to explore Southern California. San Diego became our new home and the band really started cutting our teeth.

In 2011 we did our first tour up and down the coastline. I became sick of constant changing members. It was very difficult to get members to tour, so I picked up the bass and learned to play and sing. In 2012, we did a two-week tour from San Diego to New York and back with a wonderful drummer named Phil Cullin. Then a few months later, Chy asked me why we came back from tour? He then said we’d quit our jobs and leave our home and do a year on the road. In 2013 that’s what we did.


--- Check out Some Kind Of Nightmare on Facebook and Bandcamp ﻿
Posted by WVRockscene! No comments: