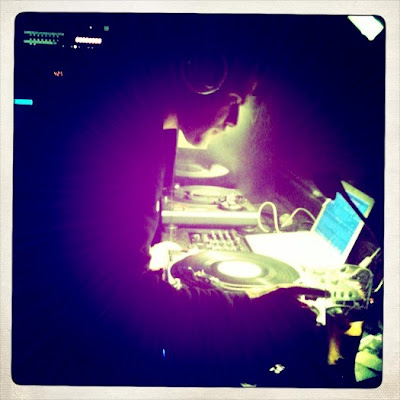 In advance of the LBA Records third anniversary show Friday at the V Club we approached Brett Fuller, who DJs as Charlie Brown Superstar and Franklin Fuckin Furnace, and who hosts the This Ain’t No Disco series at the V, for his thoughts on the label, as he was pretty much there when the whole thing got off the ground one night with LBA founder and Huntington native Neil Nessel at the V Club...

I was playing the V on a Saturday, with another DJ (I believe, because I was taking a break). Neil came in and it was a bit surprising as I hadn’t seen him for a while, and he lived in Florida. We sat down and started to catch up when he mentioned the thought of starting the label. Neil always has a great enthusiasm about his projects and I was right with him.

We talked about having an outlet for our own projects as well as for artists that were interesting and doing different sorts of things. As we continued to talk as if on cue [Bad Employees’] Andy [Rivas] walks in. I introduced the two and then mentioned that a good band to start with would be Bad Employees, I went back to the stage to play as they continued talking. When I got back it was a done deal.

I really liked the idea but wasn’t sure if it would really happen (you know how bar talk can be) but sure enough the following week I got update via email and a contract in the mail. It was a pretty exciting time.

It’s a really big help to have someone to take your music and already have outlets to present it (and sell). I wouldn’t know what to do with my tracks, I’d just throw up on a webpage somewhere where nobody would see it or just share it with my friends at some late night get together at my place.

Not to mention that Neil got me writing again, at the time I was kind of discouraged with music. I was always working as a DJ and playing with Hyatari, but hadn’t been doing my own stuff. Neil told me if we did this that he expected me to put out some music and really be a part of it.

I kinda gave him a ‘yeah yeah,’ type of response and he said he was serious, he had heard the stuff that I was working on before he left for Florida and had liked it. I had lost all of that from a hard drive crash (part of my frustration) and with his encouragement I got back on the horse and started writing again.

I like how Neil works with artists that he really appreciates and it's pretty cool to be part of a truly worldwide label. There are LBA artists all over the globe!