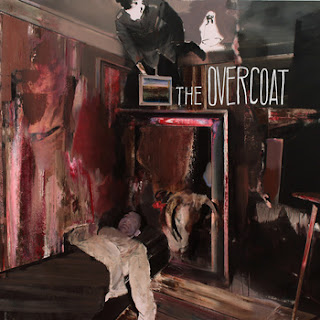 On first listen, doing random chores around the house, the eight song debut from Morgantown’s The Overcoat doesn’t exactly hit you in the face. Three quarters of FOX Japan (Pete & Sam Wilmoth + Andrew Slater) getting their new music up online was something to be excited about hearing, just don’t expect this band to sound like FOX Japan or It’s Birds, which Slater also played in.

When reviewing CDs (for better or worse, and our reviews are pretty bad) you want to give repeated listens to something; first impressions are usually right, but it’s cool to be able to really get into a record and not be distracted.

And with its “dark indie” sound -- hauntingly echo-soaked backing vocals, Charlie Wilmoth’s seemingly orchestral string sections added and interspersed, Pete’s percussion input (we’ll get to his lyrics) and Slater’s baritone guitar -- the trio’s unique (some might say weird) sound is definitely one that will draw you in.

With the ultra-dramatic (seemingly disastrous), intensely personal and almost spiritual desperation (hear “Get Chose”) described in parts, the music seems to make up a score to a play that the singer is acting in. More of a horror movie soundtrack than a date night pop song.

With help from Librarians Ryan Hizer and Trey Curtis, Brian Spragg (It’s Birds/Pat Pat) and before going to Dave Klug for mixing and mastering, while this music might not at first get people’s rocks off; it’s a challenging sound, but a richly arranged, theatrical sound and theme, that’s got better with each listen as you can kind of pick up what they’re going for as a band.

A million kudos for the production on the vocals (recorded by Klug). The songs have a sound that defies convention, sure. But the haunting vocals in general and whatever effects they’re run through to what extent, the screams on this are, in parts, simply put, terrifying.

A unique and collective hit by these dudes, each of them, not surprisingly. Perfect “dark” music for a horror movie or seeing live sometime soon at 123 Pleasant Street.