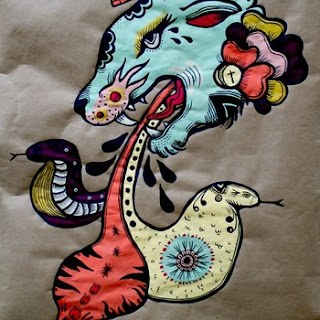 The follow-up to 2009’s Yesno, seems to nod as much in the direction of Radiohead as it does to Native American tribes and percussion, as Morgan, the Morgantown native, multi-instrumentalist singer-songwriter sings “I want to live like the Indians,” on “Eden,” sings of securing Indians “from the Indies all the way up to Washington,” on the piano-based “Move Over,” a standout track, and approaches a rain dance on “Door,” a cool vibe permeates the record.

Most listeners will hear Radiohead-type nods on the opener, “Coma So Mild,” the very awesome “Control,” with its angelic synth and dreamy guitar, and the more driving, catchy rock of “No Use.”

Morgan sings on “No Use,”

Running through the lyrics are themes of waking up from an Orwellian police state and almost Gaia-influenced retro humanism or something, with themes of Brave New World type total control, of sheep being fleeced by “Wall Street sickness” -- you know: cool stuff!

Displaying the range of their sound, “Fire” has haunting banjo over tribal drums and something like a Hammond organ. The title track closes Hunt as Morgan sings

Hunt is a CD that’s had repeated plays on the state-of-the-art WVRockscene home computer stereo system. It’d be easy to say ‘If you like Radiohead, you’ll love Juna,’ but while the nods are there, there’s enough of a uniqueness to it to give the sound its own personality.

A great listen, a very cool sound and vibe; definitely worth checking out.