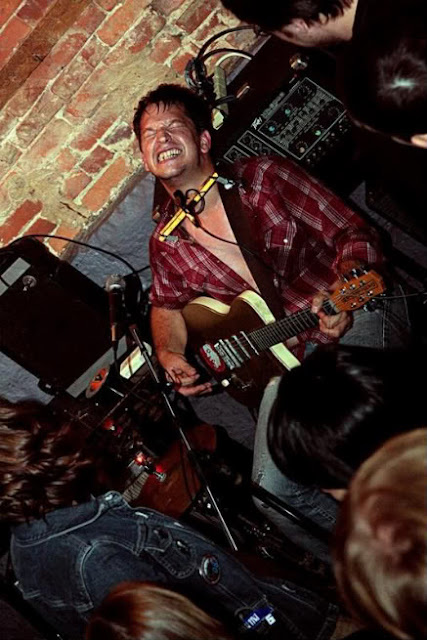 Over the four or so plus years I’ve covered bands at this illustrious online destination, and before that at thegazz.com and in Graffiti, there hasn’t been any band I’ve listened to more than J Marinelli -- his angry one-man band.

It’s weird because first hearing his Pity the Party EP, several years back, the swingin’ songs were tough to get into originally because the vocals were on the whole just so loud and distorted. But “A Little Action” is still a favorite, what with its caveman guitar and cool lo-fi vocals, and “400 More Years” is still awesome to hear.


But you can’t talk about getting awesome talking about Marinelli without mentioning Keep It Fake, his February, 2007 16-song release. Arguably his best release, ably recorded by Mark Poole, who captures a fuller, pub rock (?) type garage rock sound than what was heard on Pity the Party.

It’s not that the songs are that much different, it’s just that they sound better. No other record has been played more on the WVRockscene home stereo and the various briefly lived mp3 players. Every song is a favorite, maybe none more so than Marinelli’s nostalgic look back to 1985, “Let’s Get Awesome,” with its huge rock band ending.

Pre-emptive Skankery Sessions, Marinelli’s Fall 2010 release, really has more of a live feel than anything. Maybe it’s how the arrangement of the first few songs play like one of Marinelli’s live sets. “Rebel Without Applause” goes right into “Hey Pinkerton,” which segues into “She’s My Cheerwine,” Marinelli’s ode to the drink, or, more subtly (?) punk rock.


While Marinelli’s sound on PSS is washed in more reverb and has a more experimental bent than on previous releases, that’s the point of all this -- seeing Marinelli live. You can spend all the time you can on his bandcamp page, you can hear fellow Morgantown natives cover their favorite Marinelli tunes on Morgantown Does Marinelli, or you can read long-winded posts by swooning bloggers, but you won’t have a chance to really fall in love with rock and roll all over again unless you catch Marinelli live.

It’s not like his minimalist sound loses anything at all between the studio and the stage, and you can witness the passion, attitude and one-man phenomena itself in front of your own very eyes. Then you can buy whatever CDs “the man” is selling (probably himself, in DIY fashion) at his merch table.

It’s tough to convey the rump-shaking appeal and deep-rooted passion and love for punk found in Marinelli’s music. Now living in Lexington, Marinelli doesn’t come to Huntington frequently -- Charleston, much to this blogger’s dismay, less often -- but you can catch the sensation tonight as Marinelli plays Shamrocks.

You won’t feel old again, that is for sure. And the dancing boys and dancing girls will tell you he has won.