Part two of our Q&A with Johnny Mercury is even more rockin' than part one. If you missed that by all means check it out and check out the tunes on his MySpace profile...

WVRS: What influenced your decision to move out west?
JM: Change of pace and more musical opportunities. I originally was moving out to Los Angeles to fulfill a record contract with an indie label and in short, got dropped before I made it to L.A. It boiled down to the label wanting me to pander to the punk and indie rock demographic. I've never liked punk or indie rock and rebelled against it, and it made it hard for us to work together. I won't place all of the blame on them. I was having problems holding a band together in West Virginia and had to scrap an almost finished version of a CD. Some of those songs surfaced on my latest CD, Real Gone Rockin, in some form or another. 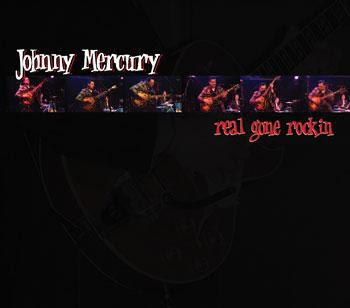 WVRS: You self-produced your last record, are you doing the same this time around? When will the new CD be finished?
JM: My ex-wife, Erynn Starr, helped me out quite a bit with aspects of production and mixing on my last CD and I found that to help a lot so I am throwing around the idea of having a co-producer for this upcoming CD. I'm really looking for someone who can double up and co-produce and help engineer. I did both for my last CD and took me longer than it should have.

This new CD is going back to what I started off in and my first and foremost love, country music. Before I picked up a guitar I was going to country, bluegrass and gospel shows and concerts and I have always been part of country and honkytonk bands. I've put it off for some time and I think I was waiting to get this last CD out of my system.

WVRS: If you had to pick one show or moment that was the most rockin' what would it be?
JM: Playing to a full room at CBGB's definitely tops of the list. When I struck out on my own as a singer-guitarist doing my own music, a lot of my friends and the fans of bands I played guitar in literally laughed in my face and said that me and my rockabilly would never go anywhere. So, getting to perform my own music to such an appreciative crowd at such a legendary venue was a big high for me and a big "told ya so" to the naysayers.

WVRS: I guess it's safe to assume that as time passes not too much will change with your sound. What makes rockabilly so appealing to so many rock n' roll fans, of all stripes?
JM: To answer your first question, even though I'm going to be doing more country now I can say my sound won't change as much one would think. Songs over time like "Sad, Cold and Lonely," "Blue Boy," "Since You're Gone" and "You Better Be My Baby" were all written as country songs then "rocked up" -- which in essence is what rockabilly is anyway. These are the songs that fans have come to really enjoy and sing at shows.

So, it won't be a big stretch to enjoy the new songs. The first two songs from my upcoming CD, The Sun's Coming Up, will be "Almost Gone" and "The Darker Side of Midnight" and I hope to have them online within the next month. You can listen to the upcoming songs as well as ones from the current CD at www.myspace. com/johnnymercury.

What makes rockabilly so appealing? Ask 10 people and you're liable to get 10 different answers. I got into rockabilly in the early 90's because it was the most logical choice for me musically and appealed to me because it reminided so much of the high energy music I played in the church. I love country, blues, jazz and gospel, which in various portions make rockabilly.

In the early and mid 90's there was no internet to speak of so for a while I honestly thought I was the only person doing rockabilly. Later on, around 1994/95 I met Jeff Walls (Hillbilly Frankenstein, The Woggles) and Rick Miller (S.C.O.T.S.) through their shows at The Levee and The Empty Glass and they started telling me about other bands that were doing rockabilly across the country. I started meeting a lot of really nice people who shared the same passion for the music as I did and we learned together.

People who like rockabilly music do so because of a many reasons. One, it's a great alternative to commercially programmed radio. When you hear a good rockabilly band it's a great experience and you certainly can't turn on the video channel and watch it!

Rockabilly is guitar driven, and rock & roll music is becoming less skilled on the guitar. If you really want to play rockabilly on the guitar, and not some generic punk power chord hybrid, you really need to know how to play the guitar, plain and simple

Lastly, rockabilly is upbeat and fun, great for toe tapping, butt wiggling and for the dancers, a great trip on the dance floor. Even though there is a high turnover rate within the rockabilly scene, the ones who do hang in there are very passionate about the music and the most loyal fans you'll ever find.
Posted by WVRockscene!