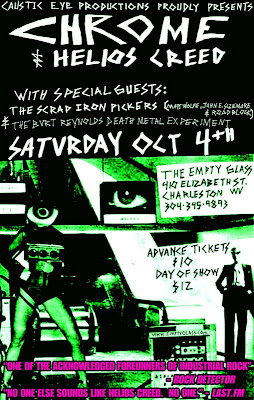 Since Wolfe and Cromer last shared a stage in Byzantine, they’ve each became proud parents and have moved on with their lives, and, their respective bands. Wolfe works with Byzantine singer-guitarist Chris Ojeda at FedEx in Charleston; Cromer is staying busy in Western Pennsylvania.

“I work two part-time jobs, I go to school full-time, I play in four bands (if you include BRDME) and I’m a dad so I'm pretty booked.” Cromer said. “My fiancée bought a house in McKeesport and I am currently squatting there till she kicks me out.”

Cromer will make a rare trip to Charleston for the show; the last time we caught him in the form of BRDME was at last year's Adamfest at the Sound Factory.

Wolfe and the aforementioned Pickers (longtime Noizbox/Stone Ka-Tet/Ghosts of Now bassist Roadblock and former Noizbox and Freak Tent’s John Sizemore) played their first show a few weeks ago at the Glass.

“We were a bit nervous and perhaps also a bit ill-prepared, but overall it went really well,” Wolfe admitted. Wolfe said that like so many others, the Scrap Iron Pickers were formed out of friendship.

“Johnny, Roadblock and I have known each other for a long time, and we’ve always been friends. So, about six months ago Block and I were talking about putting something together at just about the time of Johnny’s exit from Freak Tent. We thought that would be a great lineup for what we were trying to do, which is something completely out of the norm.”

Wolfe noted his enthusiasm for being in the young new band. “I embrace change in this case. This is a totally different type of animal and I think it's great!”

Cromer admitted to producing two brand new BRDME tunes in the smelting process that is known to produce his version of death metal.

“The first new jam is called “Two Girls One Cup.” If you don't know what that’s all about then do a search on the internet for it," Cromer said. "The other new song I will be playing at the Glass is called “Achy Breaky Parenting” and it’s about how Billy Ray Cyrus exploits his kid for money.”

Cromer also talked about other bands and projects he’s involved with.

“I currently play bass in an extreme metal band called A Moment of Clarity, I play lead guitar and vocals on my newest project that currently doesn’t have a name, its cool though, very Pink Floyd meets good prog. Also an old band I was in when I was in high school got back together. It’s like a horror rock kind of thing called Attic Unknown.”

Rumors of a possible Byzantine vinyl effort of past tunes necessitated the asking of the perfunctory “Is Byzantine dead forever?” question, with surprisingly awesome results this time around.

“I think there is a good possibility that you will see us take the stage again at some point,” Wolfe admitted. “Just not anytime real soon.”

Still, half of Byzantine will be onstage at one point Saturday night, and Cromer will have the chance of catching up with Matt and OJ and surely offending someone there -- hopefully with just his music.

“I talk to everyone pretty infrequently,“ Cromer said. “The last guy I saw was OJ and that was last December. I spoke with Tony [Byzantine guitarist Rohrbaugh] the other day actually, he's silly.”
Posted by WVRockscene!