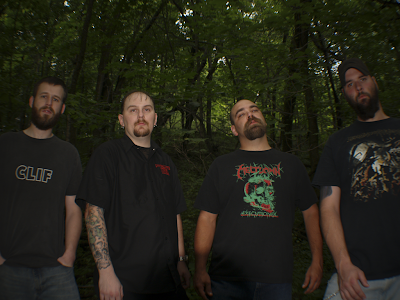 Wheeling-based death metal band Entropy (L-R: Jason Fahner, Daniel Hercules, Justin Wood, John "Corpse" Williams) returns to Wheeling Island 9/13. This is the first of a two-part feature by Stephani Hagood, a photographer friend of WVRockscene's from up there...

The words caught the air with the humor Justin Wood is known for, but mixed in with a bit of frustration. Entropy had been having a difficult practice session today, and it was evident that something heavy was lingering. They decided to take a break, which gave me the perfect opportunity to sit down and ask them some questions.

Entropy is a four-piece band from Wheeling that began in October, 2006. Justin Wood, Entropy's founding member and lead guitarist, said he started the band because he wanted to put out some music that was better than what he was hearing. He gave out CDs of his music to people, and contacted John "Corpse" Williams (rhythm guitarist), who was already in a band at the time.

Wood then spoke to Corey Roth, a musician from the Wheeling area, who told him to contact Williams. Wood told him "I already did, he's got a band." Hercules had been asking Williams to let him know if any musicians wanted to start a band, and when Wood gave a CD to Williams, he listened to it and passed it onto Hercules. He was sold after hearing the song "Seeking the Abyss" and told Williams he was definitely interested.

Wood had to leave for a while due to work, and when he returned, he, Williams, Daniel Hercules (drums), and Vickie Summers (bass), who was already friends with Williams, began working together. The first song written was "Lie in the Grave" but the first song the band learned was "Might of the Mystic."

Entropy booked their first show in January, before they had learned enough songs for a full set, and by the time the show came around, they had four songs learned, eight songs in total written. "Instead of waiting 'til we were ready, then booking a show, we booked the show and got ready, which works better because if we had waited until we were ready, we never would have played a show." Hercules adds "If you wait until you're on your feet you'll never get there, so you just gotta do it."

Their first show was a success, and with that, more songwriting came. When asked about the songwriting process, Wood says "It's weird, when we all try to write together, it's like fuckin' mayhem!" Laughter ensues as Wood continues, "It is! It's like fuckin' nine ideas, everybody's playing different shit, and we're all trying to fight our idea in louder."

Hercules tells Wood, "When you do it, it's good, when [you and Williams] do it together, it's good," seeming to prefer to stay out of the process until a middle ground is reached.

Wood explains, "I don't work well in a group dynamic, so if anybody wants to write anything together, that's great, but I just can't." Wood's brain seems to work at a speed that slows him down if he has to explain it to anyone else. He prefers to write alone, and then share what he's come up with.

Williams writes a lot of the guitar harmonies, which are prominent in Entropy's music. "Godless Demise was pretty much written over a six pack of Saranac," Williams says. When they are inspired, the music seems to flow.

Asked what inspires them, Williams speaks up first. "Hate!" Jason Fahner, Entropy's new bassist, says "God's love," which inspires Williams to call him a "fucking hippie!" They all laugh again.

Hercules says "For me, when I listen to a band that I really like, it makes me wanna stand up, grab a sword off the wall, and attack fuckin' trees and people and slaughter things, and I know that when we write songs, they make me want to do the same thing, so it inspires me to work harder. When someone listens to what we're playing, I want them to feel the same way I do when I listen to what I like."

How's that for motivation?

Wood says "I just play music I like," which explains a lot. Some of his favorite bands are Amon Amarth, Goatwhore, Arsis, and Cannibal Corpse to name a scant few.

Williams says "Ya have a lot of good things to wake up to everyday, and no matter what you still have your piece of shit job you hate, your shit fuckin' bills you gotta pay, and ya need something to get away from it. Listen to this, mosh around, punch somebody in the face, give 'em a black eye, get it all out!" Music is his release, and he wants to make music that lets everyone else release for a bit, too.

Fahner explains what inspires him is putting out good music. "I just play, like these guys said, good songs to smash things to, songs that inspire me to play, songs that keep me playing, anything that's something I dig. I don't write much, but I play..." Wood interrupts him to tell him that he is a very good bassist, and Fahner seems to shrink from the compliment.

Hercules says that no matter what, he loves to play for a crowd that is into the music, remembering a night at Brewski's in Wheeling where a guy flew through the crowd, past the guitarists into the drum kit and they kept playing. "That's what inspires me too, the people we play for."

--- In Pt. 2 Hagood talks about the band's dissolution, their reforming, and the second law of thermodynamics...
Posted by WVRockscene!

I hope in the next article there is talk about a "corpse" action figure,.....i'd buy one,....and i know others would too,....hell, i'd buy the entire Entropy line of figures,...Corpse, with kung fu grip, the Kernel with "beer spewing action" etc etc etc

but yea, Entropy, good guys, great music, what else can ya say? :-)

(PLUS, what OTHER band in the universe holds the "Annual Beer Pong Championship of the Universe Tournament"??)....i rest my case!