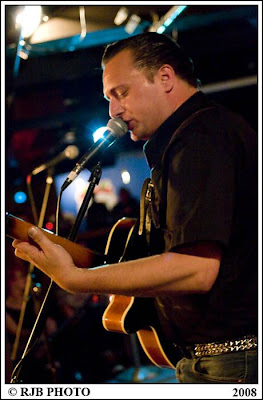 We first met Johnny Mercury roughly 10 years ago at The Empty Glass. We'd been dispatched there by a mag from Huntington called Hotface to try to (nervously) interview him and string some words together in a coherent style. We dug his rockabilly style back then, but couldn't predict how much the genre would grow on us over the years.

Well, Mercury moved out West a few years ago, has worked with a lot of cool rockers, put out a self-produced CD, "Real Gone Rockin'" last year, and is set to put out a new one soon. We caught up with him to let area rockers know he's still alive and still rockin'...

WVRS: How is life treating you out there?
JM: Life is going very well and can't complain too much. I've been lucky enough to play music steadily and even though there have been some ups and downs, I have had successes and I feel the best is yet to come! Since living in the Pacific Northwest I've had the pleasure of playing guitar for some of my rockabilly idols like Rudy Grayzell and Sid King and the Five Strings as well as Wanda Jackson, who cut some top rate rock & roll back in the day. My music has been used for indie films, a handful of CD compilations, a television pilot and most recently for a Kroger/Fred Meyer advertising campaign. Best of all, I've done it all on my own terms.

WVRS: I guess you can get a lot of good coffee out there; how cool is Seattle?
JM: Yeah, my taste in coffee has definitely sharpened since living out here. There are a lot of boutique coffee shops, coupled by a Starbucks on every corner (laughs). My favorite place to drink coffee and meet with friends is Verite Coffee in Ballard, which is a suburb of Seattle and where I reside.

How is Seattle? I love Seattle! I lived in Portland, Oregon for over five years and just relocated to Seattle two years ago. The Pacific Northwest has a lot of culture and cosmopolitan appeal without as many trappings as say, Los Angeles. Seattle (as well as Portland) is very liberal compared to the rest of the country and offers a lot to artists who want to carve their own path. Seattle and Portland both produce more independently released CDs per capita than any other city in the country.

WVRS: We got to see you at the Empty Glass, where was your first gig here in WV and where were your favorite places and memories here? Where did you grow up in WV?
JM: Well, I grew up in a little town called Spring Hill which is in Kanawha County outside of Charleston. I started playing music there under of the guidance of Chuck Terry, a fantastic guitar player and singer. He took me under his wing and at 15 years old and after two weeks of playing guitar I starting playing in a gospel group with him and his wife Kathy, who were a singing duo called The Born Again Believers. My two best friends George and John Priestly played bass and drums, respectively.

I can honestly say those early years of riding around in a beat up mustard yellow van with red sticker letters on the side are the best memories I have playing music. We played almost every Friday, Saturday and one to two times on Sunday playing churches, revivals and homecomings, primarily of Pentecostal and Apostolic denominations. We played all over Southern West Virginia and never really made any money. If we were lucky to get some gas money and there was something left over, we could get a can of RC cola and a Little Debbie Fudge round. I'm serious.

The reason why this is so special it because it was playing music without thought of marketability, trends, scenes and being cool. I later moved on to play lead guitar with a very successful gospel quartet called the Goodwin Family which was bigger in sense of accomplishment but those early years will always be the most special to me because Chuck taught me how to play the guitar, sing and most important, how to read musicians on the stage and lead a band.

The first show that I played under "Johnny Mercury" was at the Empty Glass and must say is hands down the best live music venue I've had the pleasure of being a regular performer at. I mean, how can you beat the atmosphere and vibe? I've met musicians over the years who cite the Empty Glass as their favorite venue as well.

The best memory at the Glass would be opening up for Hasil Adkins when he recorded a live CD back in the late 90's. I had actually played on the same bill with him when I was 17 years old at a festival in Belle, WV (I think) where he was escorted off stage for being drunk and screaming obscenities into the mic. It was the first time I heard him and had no idea what he had contributed to the rockabilly/psychobilly genre.

-- In part two of the Q&A, Mercury talks about why he left West Virginia, the new CD, and the power and appeal of rockabilly.
Posted by WVRockscene!