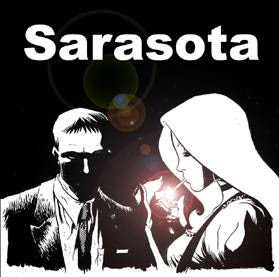 Boy, we really dropped the ball on this one. We had heard about the dual CD release show for Sarasota and The Dig-Its back in February, but due to our desire to get The Dig-Its "Know It All" we overlooked one of the best local punk CDs we've ever got our hands on.

Thanks to Dave Cantrell of The Concept, now we know just how hard this Huntington-based four-piece (don't call it pop) punk band rocks. The 10-song CD (nine originals, one cover) is one of the most impressive, musically coherent efforts we've listened to recently.

"All We Know" opens things up with singer-guitarist Mike Schritter "...dreaming of something a little different" than his lonely, depressing hometown. Like most of the songs on the CD, there are sing-along choruses with killer backing vocals; "Where do we go? Does anybody know? Where do we go when this is all we know."

"Boy You Never Learn" is Sarasota's apparent response to their parents' disapproval of punk rock. As Schritter sings in his gutteral, emotive style on the chorus:

"I'm too damn young to care what you think/too damn old to ever change. I hate to say, but the harder you try, the more I stay the same."

"By The Way Side" could have easily been the title for the CD; a narrative of solitude, depression and the hope of finding a new home emerges, with more great lyrics: "Staring up at the sun, from the bottom of the sea. I can't believe the clarity..." and a voice inside "screaming 'somebody throw me a line.'"

"Everything Changes" -- one of the best songs on the CD -- helps turn the corner from nihilism to hope for the future, despite "...picking back up on bad habits," (read: drinking) and a loss of self-control. Schritter sings on the chorus:

Probably our favorite song is "Woe Say Canseco" -- not just a word play on a disgraced former MLB slugger -- but the real gem of the CD, it seems. It opens and closes with a Get Smart sample, but in the middle it's cathartic punk rock at its best. As the band waits for "dinosaurs to die out," Schritter is "...ready to say fuck it all and dive head first into the crowd." More awesome lyrics: "I'm better than anyone I know at doing all the things the world hates the most. We're all searching for meaning, how do you describe a feeling? I don't know." The chorus is just one big "WHOAH" so yes, West Virginia, there are whoahs in the CD.

The lovelorn "Kerosene" and the acoustic, introspective "Can't Remember To Forget" round out the CD nicely.

If we'd paid $15 or $20 for this CD at an FYE or something, we'd still be satisfied. There's a NOFX song called "The Desperation's Gone" that comes to mind when hearing this band: the desperation is very much alive in Sarasota's music and lyrics.

If you ever wanted a look at what it means to be in a punk band, like punk rock, or just live around these here parts and do either of the first two, you'll find this CD easily recognizable. Musically and lyrically, Sarasota hits all the right notes on this CD.
Posted by WVRockscene!

This Cd is amazing, but it doesn't do the band justice. The live shows are steps above what a recording can reproduce, not to mention more fun than you had last night in the backseat of your car. Mike has an undeniable stage presence, and the banter between all boys is good for more than a few laughs. So catch a show, or catch 15. I have.