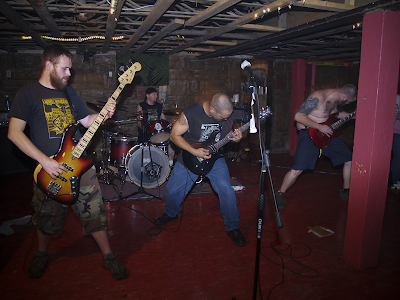 Entropy rocks Wheeling Saturday night
The day after seeing a local metal show in Wheeling, sitting around eating candy corn and watching the Steelers/Browns game on TV. Trying to decide how to start off telling you interweb people who DIDN'T make it, and/or couldn't make it out to catch one hell of a show. I think the best way to start is with a history lesson (hope ya'll liked history in high school cause Professor Jay is about to conduct class).

First off I'd like to state that I've been going to local Wheeling shows since sometime in 1994 or 1995, so the better part of my adolescence and all of adult life, and it takes a LOT to impress me anymore. Also I'm a musician, so I can be over critical most of the time and over opinionated about my musical taste. That taste is ALSO very eclectic, it ranges from Johnny Cash to Deicide, and Journey to southern Bluegrass, and from Parliament Funkadelic to Bad Religion etc., etc.

The Wheeling area music scene goes through its ups and downs, much as I'd imagine most other area music scenes do. At this point, Wheeling is experiencing a boom, and that is for sure! (I'm just not looking forward to the eventual decline that all booms encounter). This current boom was witnessed last night by all in attendance at the Wheeling Island Voodoo with local Wheeling talents Disobey and Entropy and some shredders from Beckley, Liquid Filth.

As for Disobey's set, I gotta tell you honestly here, I remember seeing these guys awhile back when they first started, and they were ok. Not saying I didn't like them, not at all I liked them rather much actually. Would I have called myself a fan a few months ago? No. These guys are friends of mine, but still I'm impartial, the music just wasn't my thing. After their set last night would I call myself a Disobey fan? Yes!

These guys have definitely matured as a band. It was the first time I've checked them out in a long time, and I had no idea what to expect. I like it when a local act surprises me. Disobey has a style of music that they call Black and Roll, dunno what that means exactly, but whatever it is, it works for them! I think what stood out from their set was a cover of “Breakin' the Law” by Judas Priest. I know what you're thinking, a cover? And it was good? My answer, YES! Go check'em out for yourself and see what I mean.

Next up on stage was a band I had never even heard of before called Liquid Filth. I came to find out they weren't from Wheeling at all, but they had came up from Beckley to play here, so I had to check these guys out. I ended up missing the first half of their first song because the Voodoo was fucking humid and hot as hell, so I had to step outside to cool off and smoke a cig or two between bands.

As I heard the rumble of bass and jugga jugga's and wugga wugga's of the guitars I knew the shit was getting ready to start. I came back in to witness some really great quality music, I'd classify it as a Southern Metal meets Power Groove Metal; kind of like if Clutch, Down, Lynyrd Skynyrd, and Pantera had some strange DNA accident in a medical laboratory involving moonshine and chip-dogs. (if you don't know what a Chip-dog is, you ain't drinking enough beer).

These guys did some great tunes and were cool guys, nothing really bad I can say about the set. Would I call myself a newfound Liquid Filth fan? Probably not. They were good, but in my mind it just didn't click as something I would grab and throw into my iTunes for future listening. But then again, I thought the same thing about Disobey the first couple times I saw them too, so I never judge a band completely until I give them a solid chance. I'd definitely check out another show if they come back to the area.

To round out the evening was Entropy. It's been awhile since these guys have played out, mainly because of line-up changes and the entire reforming of the band actually. These guys were the only band from this night that I would have called myself an active fan of before this show. I'm happy to report that they did NOT disappoint at all. They are honestly one of the few "heavy hitter" bands left in the wheeling area. While their music is rather heavy and furious, when I say "heavy hitter" I am not speaking of their music style, I'm more speaking of how they are one of the most cohesive and talented bands in our little area. They aren't the typical "karate kick" influenced metal that is plaguing our area and others as well. If anything they are doing something different by playing actual "music" -- not many people know that anymore.

Tell ya what kids, go to Wikipedia and look up "music" there. I seriously DOUBT there is even a vague mention about emo combovers and synchronized karate spin kicks in your Chuck Taylor All-Stars...yeah. Hell, they even had some dude come up and blow a fireball from his mouth. Not only is that dangerous, but it's also way more metal that karate, unless you're Chuck Norris, and you sir, you are NOT Chuck Norris.

Entropy IS the metal version of Chuck Norris though. They definitely delivered everything they were supposed to, despite the fact that the night was drawing to a close and most people were tired and hot as fuck by the end of the evening, they persevered and gave one hell of return show! So do yourself a favor and come check out a show if you can make it out.

So if you even wanna check out some good metal, and also some rather off-the-wall drunken banter between songs, come check out a local Wheeling show. I shall quote a wise man (Strong Bad) "you'll come for the Jugga Jugga's,...but you'll STAY for the Wugga Wugga's." To sum everything up, I can describe this show and local wheeling shows in general up in three words, "Wild AND Wonderful!"