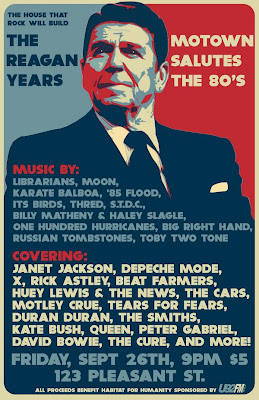 Man, no venue seems to host more charitable events than 123 Pleasant Street up in Morgantown. And nobody has been more instrumental in putting them together than '85 Flood's Aaron Hawley.

This Friday a ton of cool bands will come together for the annual Habitat For Humanity benefit and fundraiser, saluting bands from the 1980's by playing some of their tunes. It's like VH1 teamed up with WVU's U92 and 123, except this wouldn't happen if not for the bands, and especially Hawley.

"I think this year's [benefit] will rule the school," Hawley said over e-mail. "The idea is the same as the artist-centered tributes, except we're opening this one up to a whole decade."

We're not sure how Huey Lewis made the cut, or why WVU has to have a conservative newspaper funded by Washington crammed up their ass (thanks David Horowitz), but one thing is for sure, no matter your politics, and that is that no town comes together for a good cause like Magic Town.

"I'm impressed at the way this town's music scene rallies for the cause as well," Hawley said. "Everyone is just psyched to be a part of what a cool scene we have here in Morgantown."
Posted by WVRockscene!

One Hundred Hurricanes just did a radio show last night with Hawley on U92 last night to promote this. It was awesome; sorry if you missed it. Friday is going to kick sooo much ass!!!