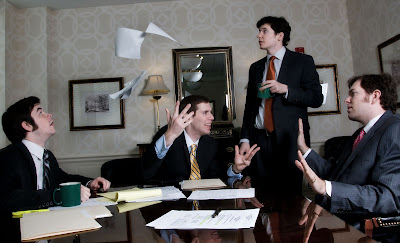 People who’ve been in bands know all about the chemistry, drama, egos and potential for volatility. But being a literal band of brothers has helped make the Morgantown-based indie rock outfit FOX Japan a productive, long distance operation.

Charlie, Sam, and Pete Wilmoth got an early start on their musical careers in their hometown of Wheeling. Charlie, the oldest brother, recruited Pete on drums and later on, the parents bought them a drum set and a 4-track. Even later on, the fourth Wilmoth brother, Andrew Slater, finalized the lineup.

Now, Charlie lives and teaches in San Diego, and will graduate in a few months from the University of California San Diego, with the hope of moving back East, closer to the band.

The band collaborates over the web, with Charlie sending rough mp3 versions of nascent songs to the members in Morgantown. No drama. No egos, Pete Wilmoth said.

“That’s the great thing about being in a band with your brothers, and I include Andrew in that stock: We’re able to circumvent a lot of the passive-aggressive nonsense that goes on in many bands and just talk straight to one another.”

“We’ve had our share of disagreements, but that’s an unavoidable byproduct of everyone’s level of engagement with this band,” Sam Wilmoth said. “If we weren’t fighting a little bit about what direction we should move in, I’d start to get concerned and wonder if we should even be playing music at all.”

That chemistry between brothers helped transition the band from an indefinite hiatus a few years ago, as the oldest Wilmoth brother focused on his field of study in grad school.

“I had spent several years working on composing classical music and being really consumed by that,” Charlie said. “And whenever I went to a rock show, I thought, ‘Eh, I could do that,’ but I didn’t pursue it, because that’s just not where my head was, even though I was writing songs privately, at home. Eventually I’d been out of college for a couple of years and I realized that if I was ever going to do this rock thing I knew I could do, that I’d have to get going.”

With influences ranging from Talking Heads and Bad Religion to Pavement and hip-hop lyrics, FOX Japan has indeed got things going of late, releasing its third record, “Reenactment,” in late February. The band is doing a steady string of shows in West Virginia and Ohio over the next few weeks.

Since 2005, FOX Japan has evolved from a self-described “nervous, jagged pop format” with obvious lyrical references to politics, consumerism and religion, into a band with a more developed, more mature sonic palette.

The band’s growth as a unit, especially when it came to recording, didn’t just happen overnight, Charlie explained.

“I don’t think we really had the ability to say what we wanted, and didn’t understand what was possible,” he said. “I also thought that I could sound however I wanted and then the mixing engineer would make it sound awesome by magic, and that’s not really the way it works. We’re a lot savvier about those things now.”

He gave kudos to Slater’s band mate in Morgantown’s It’s Birds, Brian Spragg, who recorded the new CD. “Brian Spragg did a great job with it. I think it’s a record we’re still going to be pretty happy about in five years.”

Remember, these are four guys with classical music backgrounds, so, yeah, they have discerning ears when it comes to their own output. Not only musically, but lyrically.

Speaking of obvious political references, there’s the entirely fictional song “Glenn Beck” on the new CD, with an animated video you have to see to believe.

“Oh, we were definitely hoping that would go viral,” Pete said of the video. “We sent it to Huffington Post, Dan Savage; no dice. Concerned friends kept telling me that we might get sued. I remember thinking how great that would be for the band. We’d end up on Colbert or something.”

“I don’t know if it went viral,” Charlie said, “but it did get well over 5,000 views between the censored and uncensored versions and did appear on several well trafficked sites. A lot of political sites were reluctant to pick it up, but a ton of people did see it.”

“A lot of people who I really care about have told me how much this video horrified them,” Sam said. “While my initial reaction to this news is discomfort, it only takes me a few minutes to view this as a good thing. Glenn Beck IS horrifying.”

Throwing dirt in Beck’s eye was just fine with them. “FOX Japan has always been about defiance, at least to me,” Charlie said.

Pete summed up his excitement for the current productive period for FOX Japan.

“There was no FOX Japan to speak of for a long time,” he said. “I remember not even playing drums except for maybe a few weeks a year. But it all came together, and I’m sure as hell grateful for that.”