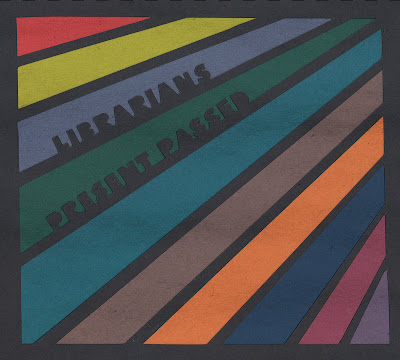 Depending on who you believe, Present Passed, the new 10-song CD from Morgantown "baroque pop" four-piece Librarians, is either the best new CD of 2010 (Grafitti) or a colossal waste of time (the Daily Athenaeum). The truth, as it so often does, lies somewhere in the middle.

The follow-up to 2006's Alright Easy Candy Stranger and the band's sophomore release is, in the good reviews, compared to Animal Collective. Well, we're not familiar with that group, so if Librarians (Trey Curtis, Ryan Hizer, Billy Parsons, Kyle Vass) are going to be accused of ripping them off, whatever. One artist that was listed in the RIYL section of one review was Leonard Cohen, and we get that, due to the hushed, almost spoken word vocal delivery, not necessarily the music.

Speaking of the music and sounds, Present Passed is pretty trippy. They're going for a kind of psychedelic almost new wave vibe, and yeah they nail that. But for people like the DA review guy, expecting to hear Lady Gaga, no that's not this.

If you've read the other reviews, and heard the songs, you'll agree that the tropical, acoustic-driven "Candy Season" is probably the coolest song on the CD; really nice, breezy breakdown in the middle with plucky bass and echo-soaked, layered vocals.

"Wait & See" has more of a kind of dance type vibe, something the band apparently has strayed from since the last release. "Cranberry Palace" has trippy arpeggiated harp type synth rolls like you may or may not have heard on cool Chemical Brothers songs. Again, it might seem like the hardest thing to get past in the overall sound here is the vocal delivery; the music, by itself, is pretty neat and well arranged.

"Hard To Unwind" not only describes us here, it's probably the most energy-packed, almost new-wave type ditty on the CD, with driving bass, ethereal atmospherics and painfully honest lyrics about a relationship status.

"Island Jam" sounds about just like the title implies. Bouncy bass, shaking maracas or whatever, more breezy carefree vibes on this instrumental 2-minute long number that segues nicely into "Polar Opposite." "Kid Stuff" is rockin'.

The title track closes the CD, folding back in on itself as it revisits the dreamy "Polar Opposite" in slightly revamped and almost haunted fashion before fading into oblivion. It's actually the same song. Present Passed? Nice touch.

We can honestly say that Present Passed sounds like no CD we've got in the couple or so years of covering area bands. These guys are making these songs for themselves; they know what they want and they do it. And on the whole, despite maybe turning some writers off with what we think is the vocal delivery, it's actually a pretty good, coherent CD.

People will either like it or not, but we've had it for a couple of months now and it's actually kind of grown on us after repeated listens.

It's nowhere near as bad as that Lady Gaga fan writing for the DA said, and we'll have to see where it ends up on the WVRockscene Top 10 CDs of 2010. But it's definitely a cool CD to put in, plug in some headphones and give a listen to.

mp3: "Hard To Unwind" by Librarians