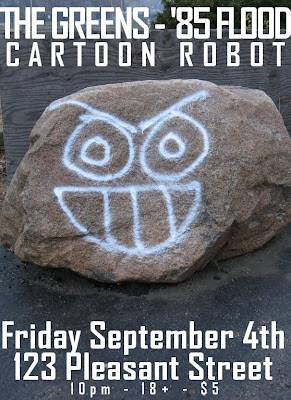 One of the band's we've been keeping a close eye on recently is Magic Town's '85 Flood.

The Flood's Aaron Hawley recently hooked us up with advance mp3s from their upcoming release Junkbone, set for release in mid-October, which isn't as far off as it was a few weeks ago.

Hawley, over email, admitted to being excited to help ring in the new WVU school year (and football season) with their friends Andy Tuck and The Greens this Friday at 123 Pleasant Street.

"We've done a back to school show with them for a number of semesters now, and it's just awesome. They really are our brothers in arms."

Hawley was also not reticent to note the progress the Flood has made since they released Toolshed Shangri-La early in 2008.

"...this is a better album," he said. "We feel like way more of a band than on the first record. And our songwriting and arranging has gotten much better." Junkbone features two songs written and sung by guitarist Adam Van Scoy (whom you may have seen in Thred) and one by bassist Dusty Hays.

Not only has the Flood expanded their version of "high octane lo-fi" rock, they've expanded their online presence with a Facebook page, which features a few songs from the upcoming release, and video clips of the first two songs from Junkbone, "Florentine Memory" and "Sex, Drugs & Rock n' Roll," the tune Hays wrote and sung.

So, check out the Flood, and look for us to do more on 'em in the weeks leading up to the release for Junkbone. And look for the Mountaineers to beat Liberty U by, say, at least a field goal.