Warm things up with Bonfire!

Things are looking up for the Morgantown “Quiet Grrrl” band Bonfire. The band (L-R: Amanda Burris, Liz Toler, Chris Quattro, Jodi Hollingshead) has been recording with Brian Spragg, posting new demos, getting ready for all kinds of shows, and finding functional Fender guitars in the ice walking around. We caught up with Chris Quattro for an update in time for their Tiny Scissors show Friday in Morgantown...

WVRockscene: You recorded with Brian Spragg recently and you’ve got some demos up; how far along are you in the process? How many total songs did you get recorded and are you finished?
Chris Quattro: Almost done! We have about one more session. Then it needs mixed and master before it’s ready to be released. I believe we have eight songs total. The idea was to have an EP ready for a cassette release.

Brian is fantastic and endlessly generous. We are very lucky to call him friend. He does a fantastic job and is a pleasure to work with. We have several more songs since we started recording though. I hope to get those recorded in the near future as well. 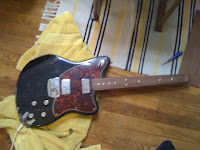 rockscene: So you apparently found a guitar in a near frozen creek this week; how weird/awesome was that, and will you be able to use it at all?
Quattro: We did find a guitar! Jodi does photography, we were out for a picture walk and we saw something on the ice on Decker’s Creek. It ended up being a fairly beat up Fender Toronado. It will be rebuilt and given new life though. It’s amazing how people throw away or often destroy expensive instruments.

I am “lucky” about finding instruments. I look everywhere all the time though. It’s almost a second job. I adore the physical mediums of music and I am an avid collector of music equipment. So it’s always cool to find something interesting and I often find things thrown away or cheap. But never floating on a ice sheet!

rockscene: Bonfire has a mini-tour set up for mid-February with Big Hurry and you play 123 with them and Arcane Rifles; looking forward to those shows?
Quattro: Of course! We have become friends with Big Hurry. We played with them a little while ago at Hambone’s in Pittsburgh. We decided to exchange shows. That’s really what it’s about to me. Friends playing with friends. It may be hackneyed to say but it’s very rewarding. On that note, my longtime friend J. Marinelli is the drummer for Arcane Rifles. I can’t wait to see his new band and for him to see what we have been up to!

﻿﻿
﻿﻿
rockscene: You play this Tiny Scissors art show Friday evening at Blue Moose; which will feature collages from Bonfire’s own Liz Toler and Dwight Pavlovic, who helps run Crash Symbols. Are you going to end up releasing some music on CS? And how neat is it to play this kind of show to feature Liz’ art?
Quattro: Well, we are endlessly lucky to have talents outside of music in the band. I really like Liz’s work. She does almost all of the advertising for the band.

Dwight has approached us to do a release with him. I can’t say which label it would be released on. The release is still in the recording process. I guess when we have something finished, we will have more information.

rockscene: I understand there will be free coffee at Tiny Scissors, is the beer and snacks free or do you know?
Quattro: That’s a Dwight and Liz question!