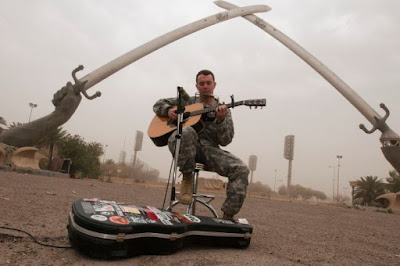 Jeff Ellis, arguably the most talented songwriter in West Virginia, starts off 2011 like he has so many others; getting ready to release a new CD. Ellis has nearly finished recording his new seven-song EP The Line, songs written during his last stint in Iraq as part of his duties in the U.S. Army.

But Ellis is doing something cool with this release. To help get the new EP out, Ellis has teamed up with Pledge Music to raise money for not only EP-related costs, but proceeds from your pledges will benefit the Wounded Warriors Project. You may have already heard about this group, and a fine charity it is for Ellis to help. We love when area rockers do charity stuff, and this is a pretty cool one.

So not only will you get cool Ellis stuff like the new EP, by pledging more, you get more Ellis merch, schwag and even cooler stuff. Ellis will even play your house and let YOU decide the set list if you pledge enough. We caught up with Jeff over email to ask him about the new EP, Pledge Music, and the recent change in his marital status...

WVRS: So how has married life been treating you so far?
Jeff Ellis: It's amazing! We ran off to Hawaii back in December and had the most beautiful wedding. It was a private, intimate ceremony on Ko'Olina Beach on the island of Oahu. We exchanged personal vows as the sun set over the Pacific. Michelle is a wonderful person and very supportive. We're very happy and excited about sharing the rest of our lives with each other.

rockscene: Where are you at with the new EP, The Line, when can fans expect that and how would it fit in with your previous releases?
Ellis: The new EP is all but finished. We have a guitar solo and some backing vocals left to do and it still needs to be mixed and mastered, but that should all be wrapped up within the next two weeks. The goal is to upload one new song per week to the pledge page until the campaign is finished; then we'll release a hard copy sometime in the spring.

I think the hard copy will have seven songs; however those who make a $10 or more donation to the pledge page will receive access to all of the digital material as it is released, previously unreleased live tracks and studio demos, and a hard copy when it is released. As to where the EP fits in to the other albums, it has two functions. Lyrically, it would fit right in with anything from the second album, "A Front Seat for the End of the World", and it actually features a song from the 2007 demos that has been polished up a bit to fit the new batch. Musically, its the next step to transition into the upcoming full-length album.

rockscene: Did you record with Eddie Ashworth again? If so, how comfortable have you got recording with him?
Ellis: We did record with Eddie again, and we're already underway recording the next full-length album with him as well. Ed and I have become great friends over the past few years, and I think he and I see eye to eye on how we want the albums to sound. He's become a trusted source of inspiration and advice when it comes to making big decisions in and out of the studio, and I look forward to working with him for a long time to come.

rockscene: You’re doing something really neat with this Pledge Music site, where fans can not only pledge money to get your music and more, proceeds benefit the Wounded Warriors Project. It’s a well known group, and conditions at places like Walter Reed were reported to be not exactly perfect. How important is it for you to do this to help veterans?
Ellis: Being a Veteran and a student of psychology, I am very concerned with the rising number of suicides in the military. To my knowledge, 2009 and 2010 were both record highs for suicides in the Army. I believe that Post Traumatic Stress Disorder (PTSD) plays a large role in this. The Wounded Warrior Project website states that over 300,000 returning service members suffer from either PTSD or Traumatic Brain Injury (TBI).

The WWP is just one of many organizations that are working to help these men and women by raising awareness and helping to develop programs to study and treat these injuries. Most of the songs on the EP are about Soldiers dealing with these issues. Writing these songs was my way of raising awareness and probably helped me to sort out some of my own issues along the way.

rockscene: Aside from the new EP, what else are you looking forward to in 2011, musically?
Ellis: As I mentioned earlier, we've already begun recording the follow-up to last year's "The Forgetting Place". I'm very excited about that. Eddie and I have some big ideas for the way we're going to approach this record, and I think I have some of my best songs yet waiting to be heard. Expect lots of melody, jangly guitars, and BIG choruses!

rockscene: On the pledge site, it says if you pledge $500 you’ll play at someone’s house, what would it take for you to turn that money down?
Ellis: I think some of the additional pledge items are kinda funny. I don't really expect anyone to put down that kind of money for me to show up at their house and sing happy birthday to them, but hey, who knows? At that point, its more about making a donation to the WWP than it is getting to join me onstage. Hell, most people just do that for free anyway. I think the best deal is the $10 pledge to get the digital tracks, unreleased material, AND a hard copy of the EP. That's a hard deal to beat these days.

Ellis plays the Empty Glass in Charleston this Saturday (tonite) with Benyaro, and plays Tamarack in Beckley Sunday at 2 p.m.