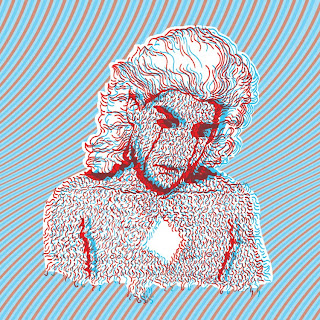 Funny story about The Resonators’ four-song EP Beard Envy laying around the house since getting it early in 2009: It’s common practice around the WVRockscene home stereo to take CDs out and place them in the case of the next CD we’d play. As Beard Envy was just a plain white CD with no discernable notation or label on it, every time we’d want to play Arms and Sleepers’ untitled EP -- which looked exactly the same -- we’d get blasted with the catchy, quirky garage rock of “Wishful Thinking,” which, among a few other songs off the debut EP, finds its way onto the full-length debut.

It’s cool because we liked both CDs, but totally different sounds.

Well, fast forward about a year, and, much as we liked the songs on Beard Envy (which you can download for free on The Resonators bandcamp page), the thing that was lame about it was that there were just four songs.

It’s not something you want to lead off a CD review with, referencing someone else’s review, which is why this paragraph is where it is. But, irregardless nonetheless, getting into the review of The Resonators’ 11-song effort Black Diamond, we direct your eyeballs to Mike Sizemore’s review of it at his Rock o’ Clock blog.

Sizemore makes the quite correct point that hearing Andrew LaCara’s band evokes something about the 90’s, referencing Weezer, among a few other acts. But it’s precisely the Weezer nod in the Shepherdstown-based trio’s sound that deserves some expounding upon.

Opening Black Diamond is the highly charged “Your Resonation,” which does indeed (along with a few other songs on the new CD) bring to mind the sound and vibe that comprises Weezer’s eponymous debut blue CD. Remember running out and buying that CD after seeing the video for “Undone (The Sweater Song)” the next day? Remember buying that DGC Rarities CD just so you could hear their version of “Jamie” -- like Sizemore notes, this was before the internet made getting one particular song so easy.

On the whole, Black Diamond may remind you of early Weezer stuff mixed with the kind of retro garage rock stylings of something like The Strokes. The whole point about referencing Weezer is that The Resonators, with an all new lineup (Charles House: bass; Joni Mason: drums) since the EP came out, still have LaCara as the driving force musically, and the sound is something Weezer fans should love.

“Wishful Thinking” would be a track that may remind some listeners of The Strokes or something like that. Re-recorded versions of “Whatever It Takes,” “Gun For Hire,” and “Confessions and Lies” fill out the CD nicely. “Wasted Without You” is slower, fatter, and prettier. Is that even a good way to describe something? Slow, fat and pretty? Neat, dreamy kind of solo/bridge part as the song leads into the very awesome minute-long instrumental, acoustic (with xylophone?) interlude “I Took Too Many Drugs For The FBI” -- geez don’t tell ‘em that!

There’s a funny Mr. Show skit where David Cross is interviewing for an FBI job or something and Bob Odenkirk asks him about all his drug use and Cross openly and quite casually impresses him, detailing his past drug use. Great name for a song, and a hilarious skit. Would’ve been great to see LaCara flush this out into a full song, because it may have been something like “Island In The Sun” or something.

The acoustic-based “Enough’s Never Enough” is one of the sweeter songs on the CD, as LaCara finds himself at the end of his romantic rope and the song crests with overdriven guitar parts. LaCara ends Black Diamond with the driving, almost punk “We’ll Always Have Cusco.” While it’s nowhere near the song in terms of tone and style, this song seems to be LaCara’s own version of “Butterfly,” as he laments being a world apart from a long lost love interest in Peru, with only the memories to show for it. A really great song that finds LaCara learning it’s better to love and lost than never loved at all. The backing vocals and harmonies will evoke the original Cuomo-Sharp duo, maybe.

Recorded by Brian Spragg (It’s Birds/Pat Pat), mixed and mastered by Dave Klug (with art by The Demon Beat’s Jordan Hudkins), Black Diamond is, for a first official full-length, a great CD.

Great rock and roll though, the kind that makes you write songs and be in a band in the first place.

mp3: “Wasted Without You” by The Resonators