West By God: "For Glory Or For Flames" 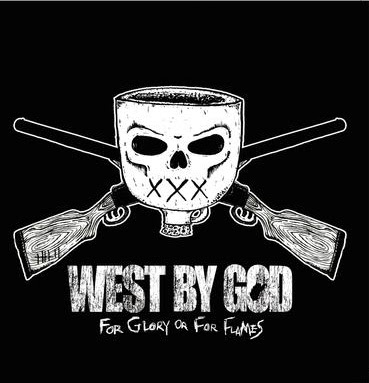 CD: "For Glory Or For Flames"
PERFORMER: West By God

There are a million bands out there these days, but you'd be hard pressed to find one whose home state is its muse. West By God, as the name implies, is a true, honest to God West Virginia rock band.

We've always compared this Morgantown-based four-piece to Clutch, for some reason. But on their recently released 11-song effort For Glory or for Flames, West By God puts its own stamp on their own Appalachian stoner rock sound, while filling listeners in on West Virginia's history, and their place and future in it.

Songs like "Home No More" and "High Ground" open the CD, with singer Darin Kordyak painting a picture of the self-reliant, honest, hard-scrabble life Mountaineers have endured; from the state's birth out of the Civil War to the Buffalo Creek disaster, Kordyak's descriptive lyrics set the scene.

On "Home No More" describing a hometown stripped bare that he hardly recognizes, Kordyak sings:
Right where two green rivers meet
Times are tough but life is sweet
Always working on our feet
Cuz we were taught we ought not cheat

And the music moves the story along. Josh Baldwin's solos seem to fit perfectly in the song structures; not dominant or too long, just killer. Mike Lorenzen plays bass and slide guitar on the recording and Treasure Cat drummer Roy Brewer steps in on the recording with rockin' results.

And in case there's any doubt about West By God's affinity for West Virginia, there's the State seal emblazoned inside the sleeve. Nice.

The band, like so many, many others, recorded the CD at Zone 8 in Granville. Compared to their debut EP, re-recorded tracks like "Pottawatomie" and "Hello Mingo" (one of our favorites) sound even better.

From Kordyak's lyrics (from the historic to the apocalyptic, a real treat) to the hard rock tunes, West By God has done West Virginia proud on this effort. Whether the band is destined for glory or for flames, this CD is definitely worth checking out.
Posted by WVRockscene!