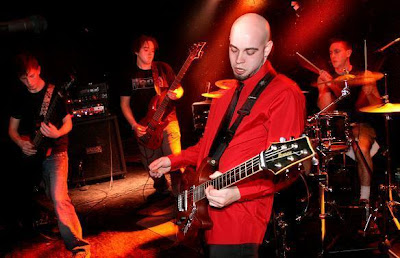 (Killing Chloe returns to Charleston for a show at the Blue Parrot 3.14)

Even talking over email, you know that Steve Barton is excited about his band Killing Chloe. The Cincinnati (via Sissonville) prog-rock four-piece is returning to Charleston March 14th for a show at the Blue Parrot with a new EP, DVD (cut into webisodes), and overall, a new band. It’s been a few years since they released their Deftones-esque CD “Two Years Later” but now, four years later, Barton’s enthusiasm for the band has only grown.

“It’s exciting times for us,” he admitted.

Barton said it was that friendship and experience that made the recording (three songs in three months) of “The Okapi & Other Myths That Exist” so smooth and productive.

That, and some whip-cracking from Fisher.

“Charles really busted my ass, as well as the rest of the band, on this one,” Barton admitted. “That’s what makes working with him great; he is my best friend so we always have a fun time and have a mutual respect for each others ideas.”

From there, the recording went to Drew Mazurek, who’d worked with Byzantine, Linkin Park and Nothingface for mixing. “He really took it to the next level,” Barton said.

Jay Frigoletto (AIC, Crossfade, Clutch) handled the mastering, and Barton said there was no lack of awe having his material handled by people who’d worked with those kinds of bands.

“Dude, we were so pumped it was crazy, but to be honest it was a bit scary to think that they were gonna hear it, and the “What ifs?” kinda started floating; “What if they hate it?” lol. But Drew was awesome and is a very down to earth guy. He took care of us and really worked hard, and seemed to have a heart in it, if that makes sense.

“We drove down to Baltimore for the mixes. I know for me, it was just a sweet thing to watch him mix and take in all that skill and learn a lot; I admired him as an engineer far before we got to work with him.”

Consequently, Barton said that Killing Chloe fans from Ohio to West Virginia and beyond can expect a more polished product than the last CD. “In all honesty [The Okapi] blows that away. Personally, I look at “Two Years Later” like a long-winded demo; we play the material live but it’s not what it could be. I look forward to getting to re-record a few of those tunes one day with better production.”

Barton said the band is trying to book a mini-tour later on in the year. “West Virginia and Kentucky will be the start. We will from there be using Indie On The Move to book a seven-day tour later this spring/summer to test the waters.”

He said he was excited about a few webisodes and an electronic press kit done with the help of Indiana-based Renegade Films.

“Renegade is our friend Cyrus’ baby. We did a video for the demo version of our song “The Watchers II” with him and it turned out great, so we began shooting an EPK (Electronic Press Kit) and getting live footage gathered for that as well, as tons of hours of random in-studio and joking around stuff that will end up being a few short webisodes. Cyrus is a very talented guy and very open to ideas; if you’re in a band look him up!

Barton said he’s looking forward to bringing his band back to West Virginia.

“I’m personally excited to show people what this band has become. West Virginia is where Killing Chloe was born, and we also popped our show cherry there in ‘07. But we have came a long way from the band they saw then. Getting to see some friendly faces and play music for them is a beautiful thing. Can’t wait to have a drink or two and rock the hell out of Charleston again.”

Finishing up, taking everything in, Barton is stoked at what may lie in store for Killing Chloe.

“I still can’t believe how cool all this is.”