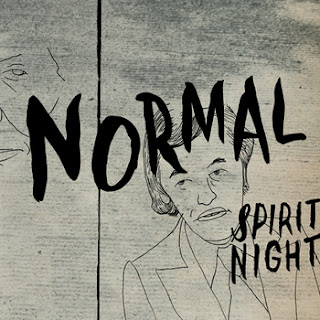 Thank goodness Dylan Balliett didn’t ruin Spirit Night’s new five-song EP Normal by leaking or previewing any of the songs online. At least not that I saw. While there are only five songs on this new EP, I liked/loved What We Will Be enough to want to hear it in its entirety all at once on the first listen.

I don’t want this review to be taken as offense to any of the other bands whose CDs I may have tried to review, or be a referendum on the state of rock and roll, the music industry or people’s slavish attraction to the phenomenon of social media.

No, this review is about this music and what it means to me.

Why does anybody do what they do? Why do people write songs? Why do people run blogs covering people who do? Much less interview them trying to ask profound questions or feel them out as individuals like they necessarily have anything meaningful to say.

“Hey, you’re a rocker so what do you think about poverty or politics? You wrote a song about something so you must have some deep insight I don’t, because I didn’t write a song!”

There are a lot of mean jealous angry people who become “critics” as a vent or outlet for their own shortcomings, faults and failures. I’ve always tried to approach musicians with respect because writing and playing a good song isn’t easy or everyone would do it. Even people who wouldn’t be considered traditional “artists” in the musical sense, and who may invite much scorn and derision from more “mature” “critics,” if you will.

CD reviews describe the music, the sounds, arrangements, lyrics, vocals, singing atmosphere and production. But do you feel anything like an actual emotion? Balliett’s painfully honest, deeply insightful poetic lyrics are one, big, raw emotion. Whether you say the words are depressing or just have an up-off-the-floor hopeful charm, the words and the beautifully arranged songs resonate with me.

To the songs: Normal picks up pretty much where What We Will Be left off, musically and emotionally. As mentioned at the top of this “review” it would’ve sucked if for whatever reason it didn’t stack up to the debut because I liked it so much. Balliett didn’t need to change anything from the version of atmospheric indie-melodramatic-post rock on What We Will Be.

The title track opens the EP with the familiar acoustic-based ambience, emotive vocals, rich instrumental arrangements found on the debut. But fans will instantly notice bass (largely absent on the debut?) sporadic 8-bit distortion, and neat, almost schizophrenic layering of lo-fi vocals. A great sound for headphones, with enough subtle synth or sprinkled on distortion to give the songs the same effect dew on morning grass does -- it makes them glisten, gives them their own sonic translucence. Is that the right word?

Normal people, like the musicians they may or may not idolize, are these days able to present a postcard bumper sticker-type snap shot of their lives to other people online, whether it’s real or not. Sometimes people get sad or have bad days, and a lot of what you might see in the mostly shallow “friend” culture of something like Facebook isn’t a representative sample of people’s lives, thoughts and/or feelings; rarely as witty or as acerbic describing your own shortcomings as some are in quite passive-aggressively condemning people they’ll never meet.

Intentionally or not, Balliett touches on humanity’s seeming slavery to an online superego, when he sings on Normal:

Balliett has moved from peeing in Gatorade bottles to the sink -- and he’s done it “like a champ.”

Balliett, like many others with an inkling of an artistic soul, takes his pain, loneliness, feelings of doubt or inadequacy -- something bad, right? -- and turns it into something beautiful and with a quite real feeling to it. Everybody feels lonely or sad sometimes, but few show it to others or open up about it.

Lyrically and at its acoustic core, Balliett’s songs sound like they’re written in isolation at 3 a.m. after a night with or without friends, or on a solo drive home the morning after -- whatever. It’s these times alone that Balliett is able to turn his own thoughts and emotions into something great. Most of the songs seem like love letters as opposed to cobbled together crack speak with catchy rhymes or neat turns of phrases.

“2:24” instantly features what is a huge asset to Spirit Night’s sound: a huge assortment of bells and percussion provided by Pete Wilmoth and on this song, Balliett’s use of the glockenspiel. With piano, bass and rolling heavy tom type rolls, and the bells, the song has the charm of a jewelry box that plays a tune with a dancing ballerina or something.

The great thing about the songs is that they would be great without the flowing soundscapes or studio tricks and effects; Spirit Night is really a vehicle for Balliett’s songwriting and musicianship -- he could likely play a lot of these songs solo with an acoustic and they’d still be just as great.

But that’s another thing that makes hearing new Spirit Night stuff exciting; the contributions of Balliett’s friends to his music. Whether it’s Wilmoth providing percussion of all types, or David F. Bello playing bass, or super neat sonic contributions from members of Librarians, the evolving cast of friends makes the songs seem even more special. Balliett seems like he’d be a good friend, and the songs, in addition to being intricately layered, simultaneously have the feel of something you could sing around a camp fire together with friends.

Normal also features a demo version of “Don’t Miss Me,” and whether you like this slightly more overdriven, slightly different still no less pretty version more than the one on the debut, I’ll just throw this out there: I’d rather hear Balliett’s rough cuts and mixes than most other bands final product. I’d rather see Balliett mess up a chord during a live solo show than see some band play a song they’ve played a thousand times in a hundred different towns for the same reason I love his music; the beauty in the brokenness, the flaws that make something sublimely great.

“Final Days,” with its faster, more upbeat “sunny” acoustic riffs and progressions, is kind of a standout track just for its sound. And like so much of Spirit Night’s music, the verbal imagery painted by Balliett matches up and vibes with the sound. Balliett, while describing himself as a “traveling shit show,” promises to take care of himself.


“I turned the family name
To a badge of shame
We must wear
Over the centuries,
Passed like the disease
That brought us there,
The destiny we share
And the color of our hair.”

“These aren’t the final nights:
I’ve still got some fights left in me.
But when you’ve lost every one
You’ve ever begun
Then you see
That it’s not worth your breath
To have feelings for anything.”

It’s always great when bands list their lyrics. I’m glad Spirit Night does, not necessarily because they’re hard to hear, but because they really are kind of poetic. Sometimes you could get the feeling bands don’t because on one level they know they aren’t saying anything meaningful or they know they’re using their music as one big put on -- as a false front. Nothing wrong with that really; rock and roll is replete with examples of people inventing new personas, but a lot of times, if there’s nothing there, people move on after long.

“The Weather” closes out Normal with a catchy, sunny admission from Balliett:

I’m probably not the only person who at one point or another has felt that the desperation is gone from rock music, or that every song that could be written has already been written, or that with all the crap that goes on in your day to day life it’s hard to connect with music anymore and feel like it means something.

I know I’m not the only one who feels the way I do about Spirit Night and Dylan Balliett. And maybe that’s the thing to take away from this long-winded rambling review; not only is Spirit Night a great name for Balliett’s musical vehicle for his own journey through life, his journal of day to day existence highlighting the sublime beauty of the pain of solitude -- attachment to others -- but the real joy of life in the end.

On a very real fundamental spiritual level people sometimes feel lonely; aside from twins or octuplets, we were born into the world alone confused and alone, and will likely leave it in the same way. In between birth and death real spiritual connections are made with friends and family. That is what I get from Spirit Night, a real connection. Who knew something free could be worth so much?

If powerful, evil people try to use music as a tool to lay self-destruction or hate on people, if there is that kind of war being waged on people, I’m even more proud to say I’m with Spirit Night. This release, I am very happy to write, did not disappoint.