Saturday's the night for Spirit Night 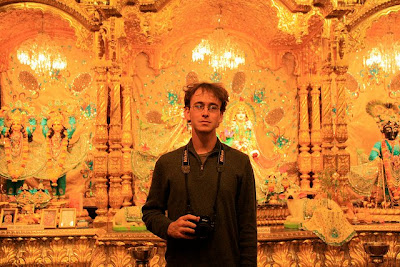 Dylan Balliett (above) will be joined by his good friend Pete Wilmoth (and a few others) Saturday night as Spirit Night plays 123 Pleasant Street in Morgantown.

Simply put, Spirit Night's CD What We Will Be is one of our favorites of 2010. No idea was had on our end how much we'd love it. Well, for whatever reason there has been nary a Spirit Night show.

This Saturday, all that changes.

To see what is up with Dylan and Pete, we again caught up with the pair for a fun, informative Q&A.


WVRS: Dylan what is up with life for you right now? Are you living in Shepherdstown or back in Morgantown?
Dylan Balliett: I moved back to Morgantown in August with the intention of working on albums for Spirit Night and my other band, David Bello and His God-Given Right, but -- surprise! -- we haven't really gotten any work done on either. However, I think we're going to try to bang out a good portion of at least the Spirit Night album in the month or so we have left before we get kicked out of our studio. I'm going to record this one on my laptop just like What We Will Be which means I'll be mobile again as soon as we record Pete's drums and I'm not sure how long I'll be sticking around after that point.


WVRS: Are you worried they'll ban Four Loko?
DB: Honestly, yes. The thought of having to go back to being drunk on just regular beer is terrifying to me.
Pete Wilmoth: Oh, God. I'm proud to say I haven't tried this stuff yet. Call me a prude, but stimulants-plus-depressants just scare the hell out of me.


WVRS: Dylan did I see pics of you on the road with The Demon Beat and/or Tucker Riggleman? Have fun on the road?
DB: I lived with my parents for about eight months this year as I recovered from an injury and the resultant surgeries. Since my expenses were so low and I had a pretty big chunk of savings to live off of, I spent a lot of that time on tour with The Demon Beat. Honestly, I had some of the best times I've had in my life. I saw a lot of the country, heard a lot of hilarious and absurd jokes, and got to see The Demon Beat play every night. I feel really lucky to have been able to do that and I'm really grateful for the fact that they let me tag along. I love those guys and I miss them, but it's good to know that pretty much anywhere I choose to live, they'll probably be rolling through at some point.


WVRS: Dylan I thought I saw on Facebook that you recently recorded new stuff? Is that right? New songs? Have you been collaborating with any more local notables or friends of yours musically?
DB: There will be a new Spirit Night EP released before the end of the year. It'll feature three new songs (one of which is actually just a re-recording of an extremely old song of mine), one demo from the album, and possibly an alternate take of the title track. Right now, it's just me and Pete, but this time around Sean Gibat is mixing and mastering because I love his work and we've always talked about collaborating on something. I'm pretty excited about it.
PW: Dylan and I have recorded just *one* new Spirit Night song so far, although we have a handful more in the works. One reason we've been a little slow on the uptake is that Dylan has been busy recording with Dave Bello & His God-Given Right, and I've been busy recording with FOX Japan and The Overcoat. 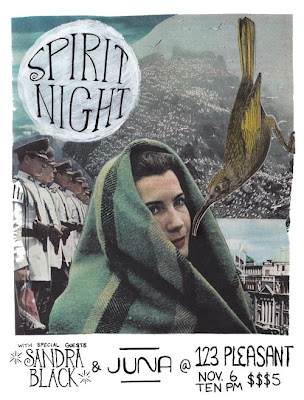 WVRS: When we caught up for the Q&A w/you and Pete, you mentioned the possibility of shows. How did this 123 show get lined up?
DB: LJ gave us the show and then we picked some local bands we really love to open. I was so surprised that Sandra Black said yes because they don't seem to play so often anymore. We're all super excited about seeing them, as well as Juna.
PW: Oh, we had talked about it a while and finally just went ahead and pulled the trigger. We're lucky to have some great friends who are beyond capable of stepping in and fleshing out what would otherwise be a pretty bare bones operation. Dylan and I are both pretty thrilled with how it's turning out. I also can't properly express how pumped we are about the opening acts (Juna and Sandra Black), both of whom make wonderful music and are pretty in line with our aesthetic, as well.


WVRS: Are you and Pete gonna be able to practice before the show? You don't live nearby each other right?
DB: We live about a block apart now, haha. We've done about five practices so far and will hopefully be able to squeeze in another one or two before Saturday night.


WVRS: Pete how excited are you for people to see what you bring to Spirit Night live as far as percussion? Definitely richer arrangements and more instruments than what you get from a drummer in most rock bands right?
PW: Well, it's certainly more instruments, with the hand percussion and everything. I don't know that it's richer, per se, but I certainly have to think differently about it. Even in the live show, there are songs where I'm sitting at the kit, but it's more like I'm playing concert percussion.


WVRS: Can we expect the same stable of guest musicians & friends that we heard on the songs on the CD? Who all will be performing with you on stage? Are you going to be able to capture the same sound live as you got on What We Will Be?
DB: The live band for this show is going to be Ryan Hizer (Librarians, Big Ass Manatee), David Bello (David Fucking Bello), George Zatezalo (It's Birds, Single Dads), Pete, and me. All of those guys appear somewhere on the album. And yes, it should sound pretty much exactly like the album but much, much louder.
PW: More or less, yes. George Zatezelo (It's Birds, Russian Tombstones) and Dave Bello both appear briefly on the record, and Ryan Hizer (Librarians, Big Ass Manatee) was instrumental in tracking a lot of it. We're really grateful to have all three of them on board. They're wonderful musicians in addition to being wonderful people.

It's definitely going to sound different than the CD, just by necessity. We can only layer on so many weird loops and synths, and I can only play so many of the percussion parts. Same with the vocals. But there were also times during practice where we were adding instruments - bass, for example, which is mostly absent from the record - to the live performance. It's going to sound great, I think.