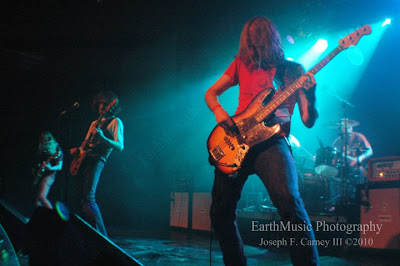 The Austin, Tx.-based metal band The Sword performs Nov. 30 at The Orange Peel in Asheville, N.C. The band plays The V Club Thursday night with Karma To Burn and Mount Carmel

It’s not every day you find a metal band releasing a record that debuts at number 47 on the Billboard 200 albums chart, then, preparing for a European tour a few weeks later, has its drummer abruptly quit.

But that’s where the Austin, Texas-based metal band The Sword found itself in October.

Talking over the phone from Asheville, N.C., The Sword’s co-guitarist Kyle Shutt talked about the highs and the low point of 2010.

“It was incredibly disappointing,” Shutt said of drummer Trivett Wingo’s decision to leave the band. “I wish it would’ve happened differently. But you have to accept reality and move forward. Now we’re back out here trying to make it up to our fans.”

Now, with Kevin Fender sitting in on drums, The Sword kicked off a U.S. tour Nov. 27, in Baton Rouge, La., and is joined by Morgantown’s Karma To Burn and Columbus, Ohio’s Mount Carmel.

They come to The V Club in Huntington on Thursday, Dec. 9.

“It’s been a blast so far, I can tell you that much,” Shutt said of the first few days of the tour. “It’s been good having some fresh energy.”

“Fresh energy” is a good way to describe what The Sword, together since 2003 and evoking Black Sabbath and Slayer, has brought to metal with its retro-type sound.

“I don’t know for sure,” Shutt said when asked what makes the band’s sound and new record so appealing to metal purists. “We just grew up a little bit, you know? We just wanted to make something that had more of a positive vibe to it; a little less aggressive, a little more tasty. We just try to write the best songs we can and go up there and be ourselves. We’re just happy that a few hundred people show up to our shows.”

Shutt recalled The Sword’s beginning around 2003, forming after playing a Halloween show as a Misfits cover band.

“After that show, J.D. handed me a CD that said “The Sword” on it, and it was a bunch of songs with a drum machine, just a demo, you know? He was like, ‘Hey, check this out, it’s my new thing I’m trying to do, and if you want to play guitar, let’s do it.’ I listened to it, and I was way into it.

“It was like five songs that made it onto “Age of Winters,” and a few others. Then, Trivett moved to town and he became our drummer. And we did one show with Ben, the original bassist, and that didn’t work out. Then, we were just a three-piece; J.D. sang and played bass, I played guitar and Trivett played drums. And at that show J.D. asked if anybody in the crowd wanted to play bass, come talk to us, and Bryan was there and he asked to join the band,” Shutt said, laughing again recalling that night.

Shutt described the sci-fi theme of “Warp Riders,” based on a story written by Cronise called “The Night The Sky Cried Tears of Fire,” also the name of the final song on the record.

“It’s more like a soundtrack to a movie that doesn’t exist. A lot of concept records actually have a discernable story that you can follow through the lyrics. This album is more like the theme songs for the story, you know? It really doesn’t have much of a narrative if you just read the lyrics. We were thinking about putting out like some sort of a comic book or like a graphic novel to piece together the whole story, but that was going to be way too expensive,” he said laughing once more.

To help expand the narrative of what the record is about (an archer, Ereth, whose planet, Acheron, has suffered an apocalyptic tidal lock and must restore balance with the help of a mysterious orb and a being called The Chronomancer), The Sword is releasing a trilogy of videos. The band just put one out for “Lawless Lands,” and will release one for “Night City” later.

“The “Lawless Lands” video just came out,” Shutt said. “I think Spin.com had it as their video of the week or whatever, so that’s cool. I love making videos, to tell you the truth. I wish that there was still an MTV to show them.”

Shutt said while 2010 has been a great year for The Sword, he’s looking forward to even bigger things in 2011, one highlight being getting to play with metal gods Slayer.

“I hope it’s only the beginning, seriously,” he said. “We’re in this for the long haul. I’ll go anywhere, play anywhere, fly anywhere. This is what we were born to do.”