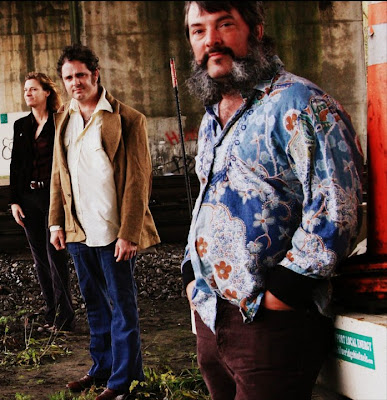 The holidays are a time for being thankful, being with family and friends and maybe doing some charity. It’s all these things too for flatpicking guitar master Larry Keel.

Talking over the phone the day before Thanksgiving from the mountains of Southwest Virginia, Keel, like many others this time of year, talked about being home for the holidays; thankfulness, charity and family came up right away.

Talk about progressive-yet-traditional bluegrass, touring with his wife and bassist Jenny Keel, and an insurance policy on his near-iconic beard, also came up.

Keel, with his band, Natural Bridge (Jenny Keel: bass/vocals; Mark Schimick: mandolin/vocals) and the help of his brother, and his old friend Will Lee, are playing more than a few charity events over the holiday season.

Keel and company bring their high energy, genre-skipping version of rockin’ bluegrass and Americana to Huntington and Morgantown this weekend. They play The V Club Friday, Dec. 10.

Supporting causes ranging from a domestic violence shelter, to Toys For Tots, to a no-kill animal shelter benefit at the end of the month with his longtime friend and collaborator, the Fredericksburg, Va.-based “one-man jam band” Keller Williams, for Keel, already established as a kind of bluegrass deity for his fiery pickin', it's great to lend his music to great causes.

“It’s wonderful,” Keel said of playing the various benefit shows. “I really want to do as many of those as I can each and every year. It’s just special. I’m just extremely blessed and fortunate to be able take what I do and translate that across to people who are in need this time of year.”

This year has found Keel, like he has for more than a decade plus, playing out at various bluegrass or jam band-type festivals and bringing young and old together with his and Natural Bridge’s music. And like years past, 2010 found Keel collaborating with friends and bluegrass legends old and new and touring all over.

In May, “Thief,” the second installment of the Keel’s work with Keller Williams, was, like “Grass” in 2005, released to much love and critical acclaim, debuting at number one on the Billboard bluegrass chart.

“It was gangbusters right out the chute,” Keel said of Keller and The Keels second release.

Playing with Williams, whether it’s covering other people’s songs on “Grass” and “Thief,” or having Williams produce Keel’s 2009 record “Backwoods,” or playing some dude’s couch like they did for a contest this year, is always great, Keel said.

Learning and playing a few of the 13 cover songs on “Thief” was a fun challenge for Keel.

“He picked out all the tunes and showed us versions of ‘em and we got his arrangements down and went out and performed ‘em,” he said. “A lot of the songs I’d never heard the original versions of, like (Marcy Playground’s) “Sex and Candy.” We’d go out and play ‘em and people would be singing along and I’d be like ‘I guess I’m the odd man out.’ I didn’t even know any of the words,” Keel said laughing. “We just had a great time being spontaneous.”

The most immediate shows were set to be ones with his older brother Gary, and Larry talked about the early influence on him.

“He bought me a guitar when I was 8 years old, and taught me how to play melodies and rhythm guitar and all that,” he said. “After all these years, getting to get back together to play shows with him over the holidays, it’s one of the most special times of the year for me. It’s super special.”

Talking about his exposure to progressive bluegrass and his incorporation of that into his love of traditional bluegrass, Keel explained how it all came together.

“Well, you know, I’ve always loved bluegrass, that’s definitely always been the heart and soul of my music,” he said. “But from an early age I’ve liked all kinds of music. From jazz to reggae to blues and rock and roll, of course. I guess listening to it so much and loving all those different styles, it just kind of crept into my music. Kind of infected it, in a good way, you know?

“I just love every kind of music. Well, most of it. This new country or new rock developed for record sales, it just doesn’t have a heart or a soul.”

Keel and Natural Bridge are joined by Keel’s old friend Will Lee from Keel’s first band, Magraw Gap, formed in the early 90’s.

“Will has come back out on the road with Natural Bridge and will be at the V Club show and at 123 as well,” he said. “We’ve been really excited about that. Will and I have been playing music together for 25 years or more, and there’s a great chemistry there; we read each other really well.”

New music is on tap for Keel and Natural Bridge in 2011, Keel said. The band will be releasing digital downloads of new songs off Keel’s website. And as Keel brings his bluegrass into the digital age, and as the fans change the way the industry works, Keel changes with them.

“It seems like a lot of the bands and the music industry itself has changed so much, just in the last five years,” he said. “People aren’t buying CDs like they used to; people all have iPods or a computer and can pick their favorite four songs off a record for 99 cents apiece. So we’re getting on that train. On my website we’ll have a whole page dedicated to 99 cent downloads where I’ll be releasing a new song every 30 days or so. So we can take our time with, produce correctly and release the real version we want to release, so we can have something fresh out there.”

And as Keel keeps putting his own contemporary spin on traditional bluegrass, looking back, he realizes making music is what he was bound to do.

“I heard a quote one time, some musician once said they can’t see themselves doing anything else,” he said. “It’s what I’ve always known I wanted to do.”