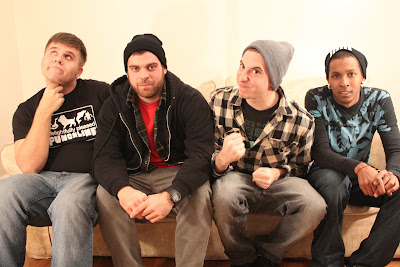 
Reposted from The Charleston Gazette

CHARLESTON, W.Va. -- Like many young adults in West Virginia, Michael Withrow decided to leave home in search of better job prospects. For the 24-year-old, though, his employment opportunities were wedded to his musical career.

The singer-guitarist left the Mountain State for Florida in February to join up with his friends in the Orlando (via Charleston) ska band 69 Fingers. His Charleston-based pop punk band, The Concept, had played its final show the month before at The Empty Glass.

Fast forward 10 months. Withrow has come full circle, and the new incarnation of The Concept plays The Empty Glass tonight.

Withrow wasn’t the only Concept member to head to the Sunshine State. His cousin and the group’s drummer, Ross Anderson, also went there to play trumpet in 69 Fingers.

“They were in a rebuilding phase and asked Ross and I to join, so I made the move down there,” Withrow said over the phone.

But after a few fun months in Florida, he came home.

“Everything went fine. I just wasn't satisfied with the job situation in Florida. It had nothing to do with music. The work down there is scarce. I wasn't able to make enough money to live down there, so I came back up.”

At home, Withrow entered his own rebuilding phase, re-forming The Concept in August with an all-new lineup. He recruited longtime friend and Dinosaur Burps DJ Neil Edwards as drummer and added Brandon Cox on guitar and Cody Gurski on bass.

“He [Edwards] and I had talked about it before,” Withrow said. “I actually texted him driving on my way back up from Florida and got to work setting it back up.”

He says that there weren’t any bad blood or chemistry problems with the original lineup; they had just run their course.

“We were practicing and working on new stuff. It was Ross, [bassist] Dave [Cantrell], [guitarist] Bryan [Flowers] and myself. At the time, I was wanting to tour and do more things with the band, and work schedules and conflicts like that for the other guys came up, so they couldn’t do it. We never actually split up; we just kind of stopped playing.”

According to Withrow, the decision to keep the original band name, despite him being the only original member left, was an easy one.

“I wrote all the songs, so it actually never crossed my mind that it would be anything but The Concept,” he said. “The songs I’d written had that name behind it. It was already established.”

It was his experience in 69 Fingers and friendship with the guys in bands like it, The Composure and Punchline that has given Withrow a renewed focus and appreciation of being the creative force in The Concept.

While the new Concept is reworking some old songs, they also have new songs to play. And Withrow is very excited about those, as well as the direction the band is going in.

“We’ve been concentrating on playing four older songs in a new way that, I think, sounds better,” he said. “The new material has a bit more of an edge as far as guitars and drum technicality; Neil is an amazing drummer. The newer songs are way tighter, have more ‘oomph’ and better melodies and song structure.”

The new Concept has been getting its collective feet wet playing shows locally, but Withrow is aware that the band will have to leave the state to make a name for itself.

“We’re going to be playing a lot coming up. Maybe we’ll tour a lot in the spring and summer. We’re not going to concentrate on playing Charleston and Huntington as much as playing out every two weeks, doing weekend mini-tours out of town to kind of build up the reputation.”

In the meantime, the band is building its name here, gathering fans of the old Concept and attracting new ones, too.

“I think the crowds have liked it. They have kind of a refreshed look,” Withrow said. “And the more we’re playing out with new material, I hope there will be an even bigger response.”