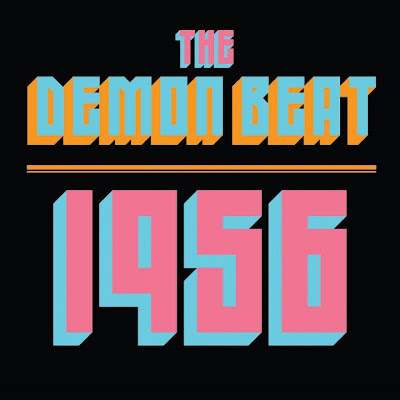 That The Demon Beat would, lyrically at least, dedicate what is in effect a concept record to Carl Perkins isn’t really a surprise if you’ve ever heard singer-guitarist Adam Meisterhans talk about his old school rock and roll influences. And it’s definitely cool for anyone who’s gotten into old rockabilly and/or read up on Sun Records.

On 1956 the three dudes from Shepherdstown (Meisterhans; Tucker Riggleman: bass; Jordan Hudkins: drums) release what is pretty much an EP as far as length goes -- it’s under forty minutes total -- but more ambitious than just a few songs on a CD.

Oh, there are no real “songs” on 1956 -- five “movements” that sound on the whole like one big extended jam session set to some lyrics that Meisterhans can relate to. Four (on average) eight minute-long parts sandwiched around the third heavily distorted, shorter instrumental movement, 1956 reminds this listener of NOFX’s 18-minute long punk rock masterpiece The Decline, not for the sound or style, just as a coherent jam with lyrics to kind of tie it all together.

While 1956 lyrically hearkens back to the golden age of rock and roll, it isn’t even barely a month old; the band recorded it over a few days at the end of November and 1956 was then mastered, fittingly enough, in Nashville. It could’ve been mastered somewhere else, but since Perkins was, as Meisterhans says, “a simple Tennessee man,” maybe it’s no coincidence.

And of course it does not seem like a coincidence the band will release 1956 on new year’s eve at The V Club, as that’s the date Perkins released “Blue Suede Shoes,” new year’s day 1956, to be exact.

While the overarching vibe of 1956 ebbs and flows between cymbal crashing, distorted blues and hear-a-pen-drop quiet verse parts, The Demon Beat nails the loud/soft dynamic and fits the sound on 1956 into some of their previous hard rockin’ bluesy material. It’s nothing like “This Is No Fun,” or “Make My Move,” off last year’s Shit, We’re 23, more like the sound of “You Only Love Me When You’re Stoned,” off the Caustic Eye/Bud Carroll split they put out. A great sound, just a divergence from any pop or punk feel they’ve had.

It’s cool to hear Meisterhans alternate between the distorted guitar sound and the clear tones you may have heard fifty years ago. You don’t have to stretch to see why Meisterhans chose Perkins as a muse of sorts; Perkins was sidelined with injury after a car wreck in March of 1956, shortly thereafter Elvis Presley would perform Perkins’ “Blue Suede Shoes” on The Milton Berle Show, helping to launch not only his own career but the new medium as well. A tough break for Perkins indeed.

Maybe Meisterhans sees in Perkins’ story something similar to trying to break through to the big time with The Demon Beat. There’s not a lot separating his band and others that “make it” except maybe the right A&R guy getting his hands on a Demon Beat CD or seeing them live in, say, New York City. But this is an attempt to kind of psychoanalyze Meisterhans; leave that to another post.

One of the best parts on the record is the stomping kick and snare beginning to the second movement, as Meisterhans soulfully and barely audibly sings about screaming girls and bright lights.

At 5:50 into the fourth movement, Meisterhans absolutely goes off on the solo riffage, just jamming it out for a few minutes heading into the fifth and final movement. The fourth movement has one of the prettier chord changes on ‘56, as Meisterhans sings “If my ship comes in, and I’m standing by/and if it sinks, and I’m left high and dry/got to lie” it is maybe the highlight and hook of the entire effort.

Having followed the band since getting 2006’s Heavy Nasty in the mail from Riggleman, it’s been great following the direction they take with their sound through the self-titled EP and 23. Maybe they’re maturing, maybe it’s something simpler, but whatever they seem to put out rocks.

Everybody who’s followed The Demon Beat to this point can tell they have a kind of throwback sound and style. But until now it’s been mainly a 60’s and 70’s feel. Pulling the 50’s into their sphere of influences only makes The Demon Beat that much more appealing to rock fans. While not much longer than a half an hour and recorded in just a few days, 1956, like a lot of The Demon Beat’s songs, seems years in the making.

Related: Huntington Herald-Dispatch article on The Demon Beat from April
Posted by WVRockscene!

dude you've hooked me up with so many CDs over the last few years you can have whatever you want. although i bet you already have a copy of this, no?

I actually did the burning on this one, so yeah, I had it early. I love this CD for so many reasons.