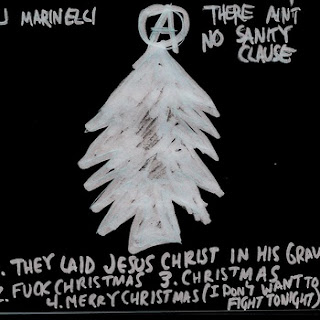 The cover really does tell it all for this Christmas time release. We have been spending a lot of time in recent days on the J Marinelli bandcamp page, checking out the music he has been putting online. And lo and behold, a Christmas miracle late December 23.

Something about this review needs the mental imagery of the Morgantown native sitting around in a delightfully over the top bright red Christmas sweater. Marinelli keeps Christmas as real as ever on this just released Christmas time classic that’s everything but crass.

You might think that J Marinelli’s four-song Christmas Eve (eve) release is just another attempt to spread holiday cheer, or, conversely, another attempt by someone to shit on the holiday, or just release some stuff for free that didn’t make it onto his most recent efforts, this Fall’s Pre-Emptive Skankery Sessions or his cover series, Stone Age Kicks.

But it’s precisely that sonically, Marinelli is able to bridge PSS to the mainly softer, more acoustic-based material on Stone Age Kicks, simultaneously moving his sound into previously uncharted areas, all the while keeping Christmas punk rock and totally class conscious (as you know he would) that make this seemingly snuck-in-by-Santa present to his fans one of his coolest efforts.

Fewer songs might other times mean a shorter review, but not here.

Like on Kicks, Marinelli again revisits a Woody Guthrie song to kick off Sanity Clause, with a rockin’ acoustic version of “They Laid Jesus Christ In His Grave.” Marinelli, channeling Guthrie, reclaims the reason for the season.

Even Marinelli’s cover of old school L.A. punk band Fear’s “Fuck Christmas,” just 58 seconds long, has meaning for us all and especially those in need this holiday season.

Schizo panning of overdriven reverb-soaked screams and distorted guitar over satanic drums -- maybe the most unique and hardcore Marinelli tune ever? With the weird tape rewind or LFO type effects ending the song, this is a song that could’ve fit in with a few songs on PSS. It’s great to see him take this more experimental approach to his sound.


“All the children on the street hope they get something good to eat/But for me it’s not so great/Fuck Christmas!”

It has quite literally been awesome seeing how Marinelli has evolved his sound from Pity The Party through, really his best release, Keep It Fake, into the softer, more acoustic-type sound mainly found on Kicks, which finds Marinelli trading the jangly kazoo sound in for banjo and harmonica, into the more overdriven, echo soaked styles found on PSS. The only real exception on PSS being Marinelli’s touching, stripped down version of “Pomade Years.”

Before Calvin Johnson was a wide receiver for the Detroit Lions, there was Beat Happening’s Calvin Johnson. You may have either heard his band or read about him and his impact on the nascent Seattle scene of the 80’s and 90’s (Kurt Cobain famously had a K Records tattoo) but Marinelli’s simultaneously debaucherous and depressing version of Beat Happening’s “Christmas” really brings things down with down in the dumps lyrics.

Marinelli’s acoustic version of the Ramones classic “Merry Christmas (I Don’t Want To Fight Tonight)” closes out Sanity Clause in total somber, minimalist acoustic Marinelli fashion, maybe not the version you’d expect, but just as touching as the version of “Pomade Years” on PSS.

Just like he did on PSS and just like the Ramones did, Marinelli takes other people’s songs and gives them an all new unique sound and importance to his own philosophy and ideas about how things ought to be. We here at WVRockscene hope Marinelli is having a merry Christmas, because man, he sounds depressed or something on one of all of our favorite Ramones songs ever, one we can actually remember seeing on MTV as a kid. Like the song really means a lot to him, like it has to a lot of people and fans of the band.

And that’s what makes Marinelli great. He can play acoustic or banjo soft or loud, play an electric guitar completely fuzzed up and overdriven or jangly, sing through layers of distortion and reverb or clearly. But it’s the passion on display -- for not only the sound -- but for his beliefs and insight and his ability to show YOU his beliefs through not only covers but also his own originals, and for his love for punk rock in general but rock and roll in particular is all about: rebellion.

The Guthrie cover, like “Pretty Boy Floyd” does on Kicks, places an outlaw Jesus in a light of really what we’d all like for him to embody --


“He went to the preacher, he went to the sheriff/He told them all the same,
‘Sell all of your jewelry and give it to the poor’
And they laid Jesus Christ in his grave”


“When Jesus come to town, all the working folks around/Believed what he did say
But the bankers and the preachers, they nailed him on the cross
And they laid Jesus Christ in his grave”

Whether it’s our lord and savior, or a bank robbing outlaw from Oklahoma, robbing from the rich to give to the poor, on Christmas day, no less, Marinelli not only reclaims historical outlaw types, he reclaims punk.

So pick up a copy of the latest from Appalachia’s resident populist punk rock poet and defender of all things real. Oh, as he’s been putting more of his stuff on his Bandcamp page, you can from there buy a copy of Keep It Fake. This, if you love Marinelli’s music, you should do for that hard to buy for Marinelli fan for Christmas. Maybe stick it in a stocking with a burned copy of the Stone Age Kicks series and an instant Christmas time Marinelli classic.
Posted by WVRockscene!