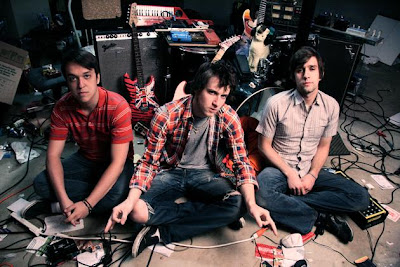 The Shepherdstown, W.Va.-based band The Demon Beat will perform at 10 p.m. Saturday, April 24 at the V Club in Huntington.

HUNTINGTON -- No two towns in West Virginia seem farther apart than Shepherdstown and Huntington. For The Demon Beat, Baltimore and D.C. are just a stone’s throw away from their hometown.

Evoking The Who, with its loud, distorted, catchy, retro-garage rock style, front man Adam Meisterhans’ soulful, guttural, lovelorn wailing, and a handful of CDs released to critical acclaim near and far, no band in West Virginia has seen its star rise as fast as this trio has over the past two or three years.

And, hey, they love playing Huntington, and return for a show at the V Club on April 24, with their friend Bud Carroll. And compared to where they’ve been recently, the drive to Huntington isn’t so bad.

“It was pretty cool,” Meisterhans said. “It gets a little annoying with all the self-important a--holes walking around, but I saw J. Mascis, which was awesome.”

For most up and coming bands, playing SXSW would be huge, and for them, it was, but, they’re taking it in stride.

“I think we’re all pretty level headed and modest about it,” Riggleman said. “It’s just like anything else: You have to work for it. We’ve put in the work and we’ve seen a little bit of a result. That’s all you can ask for.”

They’ve been making moves on their own, focusing on the music one show at a time, whether it’s Austin, New York City, or Lancaster, Pa. Meisterhans, when asked to pin down reasons for the band’s ascension and why people love their version of rock and roll, had a few ideas.

“I think there are a fair number of people interested in going back to some of the older artists and digging into where this comes from,” he said. “For some people it’s genuine and for others it just seems fashionable to wear a Zeppelin t-shirt. I think all that has a little to do with the type of people that get into what we do, but I think the touring has just as much to do with it. I think they both coincide with the attitude and work ethic we have towards music.”

Together for about five years, The Demon Beat embodies the do-it-yourself rock n’ roll work ethic; they record in Adam’s basement, Jordan handles CD artwork, and they release the music on Tucker’s label, Big Bullet Records.

They put the music first, and don’t worry about labels, for a few reasons.

“We can do whatever we want and don’t have to answer to anyone,” Meisterhans said bluntly.

“We don’t have to give anyone any money,” Riggleman added.

“At this point, the music industry is a sinking ship,” Meisterhans added. “So it seems more prudent to do your own thing and let the chips fall where they will.”

Meisterhans said that, whether or not they get a new CD out this year, where the praise comes from or where they play, making the music and writing the songs are what’s important for him.

“It’s cool when people like what you do, but I view it artistically and if you’re not loving what you do and trying to make it better in every way, then any acclaim is really just people talking,” he said. “I’m going to be in my room either way, playing along to Howlin’ Wolf records and trying to write as well as Pete Townshend, so people can either pay attention or not. It’s not going to make any difference to me.”

One person whose opinion does matter to Meisterhans is that of Huntington’s Bud Carroll, whom he called “a kindred spirit” in rock and “super generous” with all else.

“As far as guitar players go, I’ve yet to know or see anyone play who could match his intensity, tone, or ability to switch between styles, and lead a band,” he said. “Pretty unbelievable. He and I share nerd-dom about fuzz pedals, recording techniques and cool guitarists. I think he’s had a positive impact on my perspective about playing and recording.”

And as far as the drive to Huntington, Riggleman said that the response they get makes it all worth while.

“It continually blows my mind how well we are received in Huntington,” he said. “We have great relationships with both Shamrock’s and the V Club, and try to alternate our shows between the venues. Last time we played Shamrock’s the PA breaker blew so the vocals weren’t coming through and we couldn’t even tell because of folks singing along. Great town; people love to party there.”