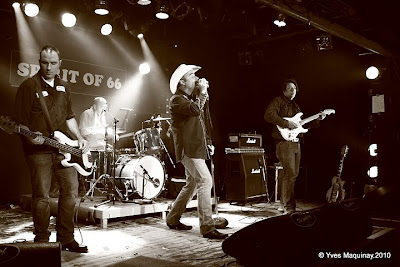 Fresh off the heels of a European tour, the Whiskey Daredevils are headed to Charleston to headline Halloween Hootenanny at The Empty Glass Saturday.

CHARLESTON, W.Va. -- Whiskey Daredevils singer Greg Miller said his band’s recent two-week European tour was a piece of cake. It was getting settled back in at home that was hard.

“The tough thing coming home is I wake up in the middle of the night for the first 10 days and wonder where I am,” he said. “I do a mental inventory and think, ‘OK, what hotel is this? Where is the bathroom? Wait, I think this is my house. That means I am in Cleveland. That’s right, I’m back in Cleveland.’”

Miller, whose cowpunk quartet headlines the Empty Glass Halloween Hootenanny Saturday, says the band was quite warmly welcomed across the pond.

“We seem to be really connecting with a group of great fans over there, and they are definitely enthusiastic about what we’re doing,” he said. “After the shows, we would usually go back to the merch table and talk to people that were interested in having stuff signed.”

“To say we are ‘big’ in Europe is a stretch, but I can definitely say we’ve been growing a very loyal fan base,” Miller said. “We know when we play a show, there will be people in the club ready to have a good time.

“There is a good core group of people that hunger for real American rock ‘n roll, and that is what we provide. To see the smiles on their faces when we first kick in is a pretty good feeling.”

The fans aren’t the only ones in Europe who love the Daredevils and American rock. Miller says it’s a different culture there as far as support.

“Europe supports the arts, if you consider us ‘the arts,’ much more than the States. If we play a club in the United States for the first time, it’s not unusual to be greeted by surly employees, have a sound guy snarl at you through sound check and then have some [expletive] room to store your gear while you wander around looking for something to eat.

“When we go to Europe, we roll into the club for sound check and have a small plate of snacks and drinks to greet us. We’ll confer with the soundman to make sure everyone is comfortable with the stage sound. Then we’ll eat a meal cooked by the club or go to a local restaurant where the promoter will sit down and eat with us.

“After the show, we’ll go to the accommodations provided us by the club instead of driving around looking for a Red Roof Inn where we think our van might not get broken into. It’s a level of professionalism that would be great to see here frankly.”

On the tour was the band’s new guitarist, Gary Siperko, who joined last year. He’s also been there for the band’s two 2010 releases: “Introducing The Whiskey Daredevils,” their fifth album, and “The Golden Age of Country Punk,” which finds them getting back to their roots.

“Gary has been coming up with some really good stuff in that vein as he has embraced Buck Owens, Merle Haggard, and other old country pickers,” Miller said. “With us, you know that we’ll do something that is not too far removed from American roots, but we’ll try to do it in our own way.

“I felt really interested in what unique things a timeless ‘American’ song had that other music didn’t. I wouldn’t say we wrote any timeless songs per se, but I think we captured a real feel on that record.”

Playing shows, whether in Northern Europe or Northern Ohio, and making music is what the Daredevils are all about for Miller

“I have a need to create songs and do these stupid little projects. It’s what keeps me sane,” he said. “Plus the rush of doing a really great live show is way better than spending your time in a softball league or entering a darts tournament on a weekend.”


WANT TO GO?
Halloween Hootenanny
With Whiskey Daredevils and Beaver Knievel
WHEN: 10 p.m. Saturday
WHERE: The Empty Glass 401 Elizabeth St.
COST: $6 with costume, $8 without
INFO: http://www.whiskeydaredevils.com/ or 304-345-3914