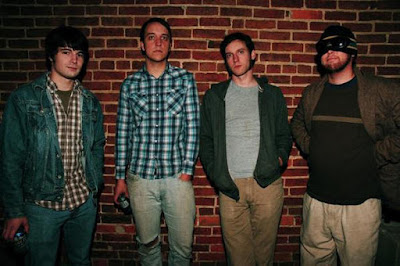 Prison Book Club is a side project for most of its members. John Miller (left) is in The Fox Hunt, and Tucker Riggleman and Adam Meisterhans (middle) are in The Demon Beat. Jeff Birdsall is The Resonators’ ex-drummer.

CHARLESTON, W.Va. -- John Miller and Tucker Riggleman’s friendship grew out of their mutual love of the Memphis-based alt-country band Lucero.

“I met John in 2005 at a Lucero show in D.C. through mutual friends,” Riggleman recalled. “We’ve kind of been stuck with each other ever since.”

The two currently share singing and songwriting duties in the Shepherdstown-based alt-country band Prison Book Club. They are joined on guitar by Demon Beat front man Adam Meisterhans and ex-Resonators drummer Jeff Birdsall. Riggleman also is in The Demon Beat, and Miller’s other group is The Fox Hunt.

For Riggleman, who plays bass in The Demon Beat, finding the courage to write and sing his own songs grew partly out of his friendship with Miller.

“I was a pretty bad college student, so I’d spend a lot of nights staying up late, drinking and playing music with John. It really helped me come out of my shell as a writer, singer and performer,” he said. “It’s a lot easier to get drunk and sing to your friends than to try it out on strangers first.”

Prison Book Club started out as friends hanging out, jamming and getting ready to play a friend’s wedding. The original lineup was a trio consisting of Miller, Riggleman and Demon Beat drummer Jordan Hudkins.

“Tucker and I’d talked about playing in a band together to some extent for several years before,” Miller said, “but those were mostly during drunken nights of playing music together in his basement or apartments. It took a while to actually say, ‘Hell with it, let’s start a band.’”

Meisterhans showed up before the wedding gig and fit right in.

“I hinted that I might want to come downstairs and play some licks while they practiced for the wedding,” he said. “That turned into ‘Sure, I’m not doing anything that weekend. I’d love to play a wedding.’”

“The band didn’t really get started until Adam came in,” Miller said. “He made it all gel together.”

Prison Book Club is a side project for most of its members. It’s a different experience, especially for Riggleman and Meisterhans, whose roles are essentially reversed from their main group. In the Demon Beat, Meisterhans is the singer and songwriter; in PBC, it’s Riggleman (along with Miller).

“When I’m playing my songs, it’s very different,” Riggleman said. “Those are things that I wrote because I needed to get them off of my chest, so of course it’s more personal to me.”

“I really love playing with what’s already going on,” Meisterhans said. “Being in Prison Book Club allows me to solely act as a player and give a more or less outside perspective on arrangement and dynamics.”

The band has a new record due out in the spring. Meisterhans co
-engineered it with The Fox Hunt’s Ben Townsend.

“This record will, hopefully, support the notion that we aren’t your mother’s alt-country rockers,” Meisterhans said. “The songs are better. The parts are better. You can also tell that we’re serious on this one because I’m using a delay pedal.”

Although Prison Book Club is a side project and its members also must dedicate time to their other groups, Riggleman said he’s proud of what the band has accomplished so far. “I think we make the best of what time we do have together.”
Meisterhans said they’re doing it for the right reason: fun.

“I can’t imagine having more fun,” he said. “I could imagine more money, but not more fun.”