Scott Niles, 3FT back "into the fray" 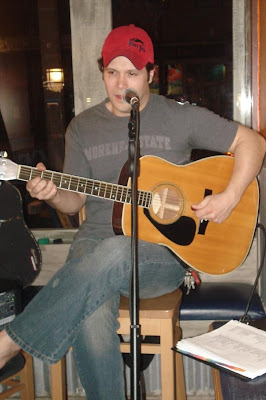 After noticing that Huntington’s Threefold Theory was back, playing Sharkey’s Saturday night, we caught up with frontman Scott Niles (above) to see how things had been the past year or so, and what’s up in general.

It’s been a rough year basically. Last July I herniated a disc in my neck and had to take a hiatus from playing music. It was pretty awful; I couldn’t even lift a jug of milk, let alone a guitar for a long time. At the same time, Pete found out he had major lower back problems.

Luckily for me, I have been and continue to get better. Unfortunately for Pete, his injuries are just too severe -- he’s still injured, and is out of commission for the time being. I hate it for him.

Add to that the fact that Nik moved to Akron in January for a new job, and it was just one thing after another!

But, rather than declare 3 Fold dead, we just kind of hibernated it for a while. Nik still comes in town frequently, and we had this June 2009 gig booked in advance that pays well, so as soon as I knew I’d be good enough to play it, we got together and I called Steve Hall, a friend of ours who’s a Marshall University music professor to fill in for that gig. The Sharkey’s gig on June 6 just kind of fell in our lap.

So in a nutshell, we’re still not 100% sure about the future of 3 Fold Theory, but I’m pretty sure that if it started up again fully, it’d just be me with two new people, and at that point I’d rather just start over with a new band name and whatnot.

As for June 20, Ten Carp Lie is playing the V Club for a benefit show, and asked me to open up with a solo acoustic set. I do some originals, including 3 Fold material, as well as covers. It’s pretty cool.

Bottom line is that I was down, but I’m coming back like McRib! LOL...I’m ready to play music again, and after October (when I get married!), I’ll probably be looking to start/join a new band.

I can’t wait to get back out playing music on the regular.
Posted by WVRockscene!