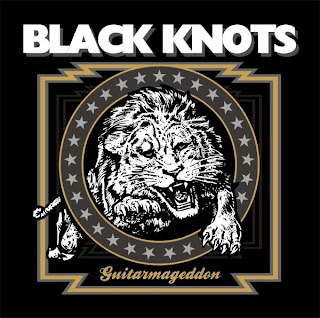 On their self-produced sophomore effort Guitarmageddon Huntington's Black Knots seek to redefine what kickass can be over 10 songs in less than an hour. If, in recent months or years, you've asked yourself 'What the fuck happened to rock and roll?' the Knots have the answer, and it's as big as the record's name implies.

From the opening riffage of "The Rapture" to the anthemic, angelic closing of "A Change Is Gonna Come," the Knots -- fronted by out-of-control bassist Jerry Lee Queen and powered by the insane solos of lead guitarist Greg Gatlin -- capture an unparalleled frenetic sound on the CD.

It's too bad that Undisputed Attitude is already taken; would've made a nice alternate title. The phrase pops in your head listening to Guitarmageddon.

Listening to their songs, you're instantly struck with the idea Angus Young started a punk band with James Hetfield or something, influenced by Turbonegro and Supersuckers. As you roll through "Redefining What Kick Ass Can Be," "Steel Rails" and "Bout Fuckin' Time" the Knots take you on their version of a hardcore rock and roll fantasy.

"Gypsy Cobra" and "Tokyo Ho's" are nice surprises, but the band wisely saved the best for last, placing "A Change Is Gonna Come" at the end of the CD. This song stands out with its more melodic power-chord flavor, anthemic whoahs and angelic backing vocals provided by Queen's ex-girlfriend.

Queen sings "And I've been told that a change is gonna come" over a ringing intro before defining what the Knots mean to him -- "kicking ass" and "running wild," living and loving, the good and the bad, all through rock and roll -- all over drinks, naturally.

"These good times tonight we take 'em back," Queen sings before one of Gatlin's huge, soaring solos over the female space auhs. The song is at once an ode to the band itself, and still deftly attempts to be something bigger without seeming political at all. It's just the power of rock and roll.

Where most Knots songs have a gnarly, balls-to-the-wall, plug-in-and-go mentality -- the thought that these guys could have rented all their instruments and would have to take them back at the end of the day, ending everything, emerges -- a hopeful, approachable hit song is the result. A real anthem.

You get the sense that Queen and the Knots don't take themselves too seriously, but when it comes to rock, they're dead serious. You can picture them pulling up at a show in their old school "Gnarly Cobra" van, bringing nothing if not a kickass rock and roll party.

The Knots approach the pinnacle of their craft on Guitarmageddon. They've definitely made progress since Hell Bent To Kick It Out; they've brought guitarist Bobby Balboa in successfully, toured regionally, recorded and produced one hell of a great rock and roll record by themselves, found the favor of a few independent labels, and, with Guitarmageddon it doesn't seem like the end is anywhere near for the Knots.
Posted by WVRockscene!