CD Review: "Stick To Your Guns" 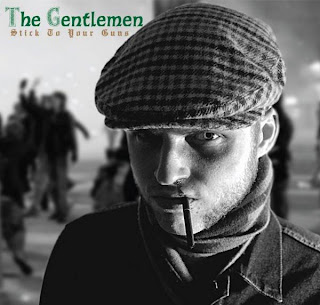 CD: Stick To Your Guns
ARTIST: The Gentlemen

We can remember a few years back a friend of ours was like "Man, you need to listen to Dropkick Murphys" and at first, hearing about the Boston-based Irish-themed punk band, we thought it was all part of some global conspiracy to sell more Guinness and Irish Spring. Or, he'd eaten too much haggis, maybe.

Well, suffice it to say, after hearing so many DKM CDs (we bought the DVD!) we understood the power of mixing punk rock and traditional Irish music. We ended up playing "Forever" at our wedding, and have taken up saying that we're "way more Irish" than others.

All this matters because hearing the hugely anticipated (by us) sophomore effort and full-length debut Stick To Your Guns from Magic Town's resident eight-piece Celt-punks The Gentlemen not only reminds us favorably of DKM, but this band has the richly textured, softer side (with the bagpipes, whistles, fiddle, mandolin and piano) DKM has, mixed with more of a thrash punk sound.

Like DKM, they open with a bagpipe intro. Once you've heard bagpipes cut through loud, boisterous punk rock songs, you'll understand the power of the pipes. After calling out everyone from Nickelback and Nancy Grace to Brittany Spears, Bill O' Reilly and politicians in general on their shitlist of a punk rock opener "Embarrassment," the band launches into 10 songs worth of stellar material.

And, our advice to the band: do not mess with those Nancy Grace fans. DO NOT MESS WITH THEM!

From standout songs like the anthemic polemics of "War Time In North London" and "Belfast Boy," to the sprightly whistle and acoustic-based "Under The Rowan Tree" and the piano ballad-meets-punk rock tribute "Molly Malone" to one of our favorites, "Fat Tim's Life," lyrically the band covers traditional Irish fare -- hard times, drinking, loving and fighting (both the drunken personal and the bloody Catholic-Protestant variety) -- over delicate intros and verses and the hard-rockin' sing-along punk rock choruses. And no doubt they hate wankers just as much as we do.

Can't sing? You can do the whoahs!

Singer Matthew Linehan shares the singing duties in parts with (among others) Corey Forindi, who plays the pipes and whistle. Like DKM's vocal combo of Ken Casey and Al Barr, the split singers just add to the band's range and sound, and make the songs seem like more of a party in general.

The CD, in true punk rock fashion, was recorded DIY by bassist Tommy Bailey at his Bebop Studios in Morgantown. Kudos for that; some locally produced CDs come through low after mastering and all that. The songs on Stick To Your Guns are loud, perfect for you to sing along with just like you're in a pub with the band.

A half-dozen or so guest musicians, who play on most of the songs, add even more depth to the band's already big, well-arranged sound. And, like most great punk rock, the songs average just over two minutes in length, so if you have a short attention span you can still rock out with The Gentlemen.

The band (Linehan, Forindi, Bailey, Geoff Wells and Drew Smith: guitar, Isaiah Richie: fiddle; Nathan Jones: mandolin; Zach Hogbin: drums) together for just over three years at this point, are at once ahead of schedule as a band, and at peace with what they want to sound like. They've already played with NYC punks The Toasters, New Jersey's Bouncing Souls and Mustard Plug; big-time punk bands each, and you know The Gentlemen will never switch up and become Brit pop.

The Gentlemen are or were trying to play Warped Tour 2009, compared to some of the acts we've heard playing that tour, getting The Gentlemen on it, or seeing the band end up on a major punk label, like Fat Wreck Chords, would certainly not be a surprise.

Whatever ends up happening with these guys, this CD is a hit with us. You know a CD is good when it's over and you're all like "What the hell? What happened to the music? That's it??" but that's the feeling we take from hearing Stick To Your Guns; as The Gentlemen follow their own rocky road to Dublin, we wanna hear more.
Posted by WVRockscene!