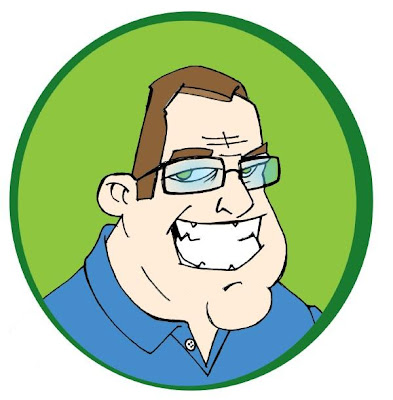 We’ve been a fan of Rob Summers' art for a while now, having been exposed to his work on his flyers for Morgantown’s West By God, and his drawings at Willey Works, his graphic design company. In the first installment of our “Focus on the Flyers” series, we talk to the 32-year old Ripley native and Fairmont resident about his art, life, work, influences and musical preferences.

WVRS: To open with a personal question: how long now until you’re a proud parent?
RS: Little bear will be here soon, real soon. We made it through this weekend’s full moon, which had me on my toes. This is our first and we are very stoked. We never found out what the gender is, so it’s going to be one of those TV cliché moments where I get to run out and scream “IT’S A _____!” To anyone who reads this, who are planning on having a new baby, heed these words: Do not start remodeling any part of your living quarters.

WVRS: You still working at Cashland Pawn?
RS: Yeah, locally I’m everyone’s best friend and the guy everyone hates all wrapped up in one. It’s a pretty sweet job and there is never a dull moment. Working the family business is always a good thing. It is not the original plan I had for myself by any means, but I have always been one to follow the path that divine intervention lays before me. It’s working out pretty good for me. I try to run that store differently from your stereotypical, shady asshole pawnshop, and I think it really gives us an edge.

WVRS: How old were you when you thought you had the artist’s bug as it were?
RS: From the beginning. I was drawing before I could tie my own shoes. I had one of those dysfunctional, secluded childhoods that seems to produce so many artist and musicians. All through school I rocked every art class I could. I thought my journey to Motown would get me closer to the Art Institute of Pittsburg, but I got sidetracked. After two years of art school here at WVU a certain professor pulled me aside and told me that the “cartoony shit wasn’t going to cut it,” so I bounced and finished with a degree in advertising in 2004.

WVRS: Any particular artists or comics motivate you growing up?
RS: All of ‘em. The comic artists back then all did the house styles of DC and Marvel like they were all just drawing to mimic their predecessors, which was cool but the early 90’s brought fresh new looks that really wowed me. Todd McFarlane, Jim Lee, and all those guys who, at the time, had the new fresh style and broke away to become successful by doing their own thing. Still today I get motivated by everything cartoon I see, from cereal boxes to Venture Brothers.

WVRS: So you’re involved with Notion Comics as an illustrator? Was that through that contest, you just promoting that? How/when did you hook up with Notion?
RS: Notion Comics is the brain child of Swiff Tiny Tales creator Drew Augustin. He threw out some contest just for bragging rights in the myspace community a year back or so. They were cool tournament style competitions that I participated in just for fun. He recently did a shout out for artists and writers on this new project of web comics. I jumped on board just to be doing something different. When all you do is draw for commissions and logos to get paid, it gets pretty mundane and really reflects in your work. I thought this would be a good chance to draw just to be drawing. Notion comics is new and still developing. Drew is a young pup who’s going to go far. He’s rock steady and has more ambition then anyone I know. Hopefully Notion Comics will be a good starting point for us and all the other great artists and writers involved.

WVRS: Looks like you’ve had your art featured by a few folks, who all has used your art?
RS: Ah man, I’m all over the place on the world wide web nets. My portfolio has gotten fairly big over the last few years. One of my biggest one to date would be a logo I did for cheaternews.com. That site got featured on CNN, unfortunately a few months before I did the logo. I do a lot of toons for start up websites, a lot of which go the distance and some that just die within a year. I get a lot of commission work from guys with great t-shirt ideas. They think they can get me to do a piece for them cheap and they will sell tons of shirts. I wish that was the case, I would be loaded. That’s one of the best things about America though, you can promote and sell anything if you just bust your balls and do it right.

WVRS: You do commission work, what are the pros and cons of the bouncing off ideas between you and the client? Headaches or smooth sailing?
RS: Most of the customers I deal with are super cool. I do this stuff dirt cheap compared to going other professional routes. The way I see it I can go work at an advertising agency and make 10-20 dollars an hour while they charge the clients 300-500 dollars a pop for goofy cartoons, or I can do it myself from home and still make my $10-$20 an hour. I have to do it cheap cause there is so much competition out there. Most of my clients understand that and that they will get what they pay for. Every once in a while I will get a real jerk off who wants to run me though the ringer on some $30 cartoon logo. I use to put up with it cause I could always use some spare cash but lately I have learned to just refund their cash and tell ‘em to piss off.

WVRS: You’ve got the “cartoony” animation geared more towards kids and then you have the deviant art section that may include some gratuitous T&A you get in trouble w/the Mrs. for any of that or is she cool with it?
RS: I got a little burned out on the custom cartoons and logos so I found this eBay niche for people wanting original pin-up comic character art. The way I see it, the day I don’t enjoy drawing large breasted, scantily clad women is the day I hang up the pencils.

I get some really creepy requests sometimes. I once did a cartoon pin up of a transvestite in a two piece bathing suit for a “women with wangs” website. Yeah I’ll do anything for money. My wife is the coolest chick on earth. She knows that the only time I’m really at peace with myself is when I am drawing. I really need it. Drawing soothes the beast within and keeps me from killing everyone in a ten block radius.

WVRS: Then you’ve got the more gory type art, is that just an outlet for your daily urges on using people’s entrails and flesh for practical everyday purposes? Haha
RS: I was one of those creepy kids who drew the shit in algebra class that would make you not want to sit by me at lunch. I still have a very dark side, as we all do, but my art has kind of outgrown it. I still like to do some gore stuff here and there.

And yes sometimes I do want to make flesh capes and skull caps to wear while I dance around with my junk tucked under.

WVRS: You’ve made a few flyers for West By God, got a particular favorite flyer you‘ve made for those guys?
RS: I would have to say the evil coal miner flyer is my favorite to date. It was heavily inspired by Derek Hess, the greatest flyer artist of all times. I would trade a limb for his talent. The West By God guys are great. I enjoy doing these flyers for them, they tell me the fans really dig ‘em too.

They are one of my favorite local bands. For Glory or for Flames rocks. I’m not on the local scene like I was back in the heydays of heavy drinking and womanizing. I would have to say the Weedhawks are my other favorite local band. Bobby and Ruby are awesome and real crowd pleasers. I hope to get back in the mix and catch more shows from them and the WBG boys.

WVRS: If you could make a flyer for any other particular local bands, who would you pick?
RS: I would have to resurrect Who Killed Teacher from the ashes of despair. They were bad ass and talented way before their time.

WVRS: What might Rob Summers do in his spare time beside drawing or preparing for parenthood? Play PS3? Read?
RS: SHIT man, I don’t even have enough time to shower regularly like a normal human. It has been like this for years. I did break down a few months ago and I have started to force myself to relax and do things I used to enjoy doing. Currently I’m am squeezing in time for some PS3; playing Viking Battle of Asgard now. I started watching the Shield seasons and I’m now on season three. I’m also half way through the complete run of the Conan trade paperback collection by Dark Horse.

WVRS: Any particular art projects or work you’re looking forward to this year?
RS: I just want to become a better artist and find my own style. I’m kind of all over the place. I hope to get discovered by someone who wants to pay me for doing my own thing at my own pace. A lot of my customers tell me they are going to have tons of work for me and it never happens or they just want to stick it in me with out even taking me on a date first. My first goal is to finish the web site. I started rebuilding it before all this baby stuff and its kind of in internet limbo.