CD Review: One Hundred Hurricanes "60 Years Under The Stars" 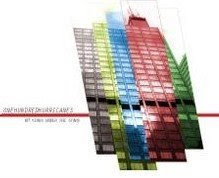 CD: "60 Years Under The Stars"
ARTIST: One Hundred Hurricanes

The simplest jumping off point is to say that, if you like The Strokes, you'll like or maybe even fall head over heels in love with One Hundred Hurricanes.

Formerly known as The Getaway, this Morgantown-based four-piece compiles 15 super catchy Brit-pop influenced rock songs on their debut effort "60 Years Under The Stars," a CD we'd initially describe in the good-to-great category. We'll admit; the jpeg of the CD cover we uploaded above pretty much sucks, but the CD, well, pretty much rocks.

The band (Michael Withrow: guitar/vocals; Denny Dingus: lead guitar; Kyle Williams: bass, vocals; Nick Kirk: drums) kicks the CD off with the high-energy rump shaker "Duke Hat" -- a heavy nod to The Strokes. There's another Mike Withrow? Apparently, and he's been drinking the water up there. Withrow's faux English accent is of course one of the first things that jump out at you, with lyrics about typical young rocker lifestyles; being on the outs when it comes to life, love, and being in a band.

"Lookout" is bouncy Brit-rock that has Withrow lamenting he "...didn't know exactly how to stand out in a place that just wants trends." Like most of the songs, it's catchy, with a cool solo thrown in for good measure. "Back On Your Own" is one of the real gems on the CD; a mellow, downbeat number that would serve nicely as the last song on what, in an earlier day, could've been the last song on the front side of the record and/or tape. You can surely remember those days.

"Snake" is a slower changeup with very cool solos and shredding, with Withrow asking rehtorically "Is it radio friendly?" Yes, your band is getting airplay on WVU's radio station and WCLG, man!

The CD closes with Withrow on piano on the mellow, near-power ballad "When The Pictures Fade," a song that dutifully changes things up at the end. Withrow sings introspectively "You'll see everything, when you're old and gray. You'll see everything as the pictures fade." A nice way to end things.

Recorded aptly (as most are up there, it seems) at Mark Poole's Zone 8 Studios in Granville, the CD would easily make it into our "top 10" of 2009, if that means anything, or if we make it that far.

From the songwriting to the recording to the sleek, artful, neato packaging (done DIY-style by Williams), this is a CD that you wouldn't be surprised to find on the shelves at some mega-chain, or hear on some cool radio station, like U92, maybe (AHEM!). Lyrics would've been nice, just because it seems like Withrow comes up with some good ones. ("Do you think that god is really one of us? You know she'd like to say so, and I think she does." he sings on "Back On Your Own")

Overall, "60 Years Under The Stars" is a nice reminder of what we've already known about Magic Town; great bands up that way. A very cool CD and a great way to kick off 2009.


--- One Hundred Hurricanes releases "60 Years Under The Stars" Friday @ 123 Pleasant St. with Pittsburgh's Omega Love and Morgantown's own Daniel Conway.
Posted by WVRockscene!

Your blog keeps getting better and better! Your older articles are not as good as newer ones you have a lot more creativity and originality now keep it up!